Turning the radio on when leaving a brand new puppy at home is an age-old trick to prevent barking, boredom and anxiety in young dogs. But what if you could turn on a playlist made especially for your pet with its personality and your tastes in mind?

Mac is becoming a bit too famous for this small town. Courtesy photo.

Spotify made that a reality in 2020 by launching its Pet Playlist option, which allows users to answer a series of simple questions about their pet and receive a tailored collection of songs to leave on while their pet is home alone, or to enjoy in the company of their furry best friend.

As an obsessed pet owner and avid Spotify user, I jumped on the opportunity when Pet Playlists launched at the beginning of the year, creating a playlist for my cattle dog Mac.

Since I made Mac’s playlist all the way back in February and couldn’t really remember the process, I created another pet playlist while researching for this story — this time for my 18-pound black cat Pistol.

Spotify began by having me select my pet from a limited list: dog, cat, hamster, bird or iguana. After selecting the cat, the algorithm asked me a series of questions about Pistol’s personality with the opportunity to answer on a sliding scale between two options. Is your cat relaxed or energetic? Shy or friendly? Apathetic or curious? 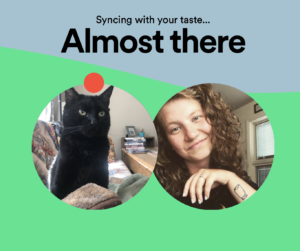 After answering, I was prompted to upload a photo of Pistol and enter his name. Next, the algorithm placed Pistol’s photo next to my own avatar and told me it was “syncing our tastes.” Then it was complete: Pistol’s Pet Playlist popped up in my Spotify app on my desktop and smartphone.

Apparently, Pistol’s relaxed, friendly and semi-curious personality synced with my music habits to create a feminine dreampop odyssey with the most random smattering of country hits about halfway through — not to mention a cameo from The Notorious B.I.G. Pistol’s Pet Playlist does end with Slowdive’s “Sugar for the Pill,” however, and that feels exactly right for my largely lazy but also slightly wacky feline.

I do have to tip my hat to Spotify for combining two of my favorite things — pets and music — despite the streaming mogul’s seemingly random results. The people behind the process may actually be on to something. I just hit play on Mac’s Pet Playlist, the alternative rock band COIN began pumping from my computer, and she curled up — now fast asleep — next to the speaker.

Create a playlist for your pet at spotify.com/pets.