In celebration of the upcoming Lost in the ‘50s in Sandpoint this weekend, the Panida Theater is showcasing two classic car films, “The Fast and the Furious” and “American Graffiti.” 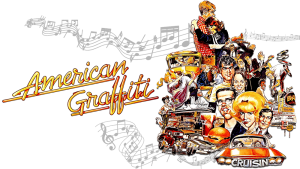 A promotional poster for “American Graffiti.”

The original 1955 “The Fast and the Furious” will play at the Panida main stage on Friday, May 19 at 3:30 p.m. While the modern film franchise might deter you from seeing this classic film noir, trust me, it’s a fun old film to catch in the theater (and I promise it won’t include Vin Diesel anywhere near the screen).

In the original release, Frank Webster (played by John Ireland) has just broken out of jail, charged with a murder that he did not commit. On the lam, Webster is cornered in a small town coffee shop by an overzealous citizen. While escaping, he kidnaps a young woman (played by Dorothy Malone) and drives off. But the woman proves a troublesome hostage, trying to escape until, through mutual struggling, the two soon fall in love with one another.

The story was written by Roger Corman, who later went on to fame as an independent film director.

The second installment of the Panida’s classic car series is a fan favorite; “American Graffiti.” Though set in the early ‘60s, this coming-of-age film was directed and co-written by George Lucas, and starred a cast of up and coming actors, including Richard Dreyfuss, Harrison Ford and Ron Howard.

“American Graffiti” is set in Modesto, Calif. and is intended as a humorous study of the cruising and rock n’ roll cultures made popular in the post-World War II baby boom. Told through a series of vignettes, the film follows a group of teenagers and their adventures during a single evening.

Produced with just a meager $770,000 budget, “American Graffiti” became one of the most profitable films of all time, garnering an estimated return of well over $200 million in box office and home video sales.

Perhaps more important than the film itself was the powerful soundtrack, which was released as “41 Original Hits from the Soundtrack of American Graffiti.” Lovers of ‘50s and ‘60s doo-wop and rock n’ roll will enjoy listening to this film as well as watching it.

For a full listing of upcoming Panida Theater events, check out their website at www.panida.org.