If you’ve sweated up Mickinnick Trail, cycled the rocks and drops of Syringa Heights, or walked your dog on the Pend d’Oreille Bay Trail, then you’re familiar with some of Bonner County’s most popular trails. But these examples are just a small sample of the county’s trails. The Trail Mix Committee has counted them all, and it wants to help you find out about the rest of them.

The committee got started in 2014 as an outgrowth of cooperative work among the cities of Sandpoint, Ponderay and Kootenai to create the Pend Oreille Bay Trail, which connects the land of all three. An intern for this group “interviewed everybody who was interested in trails,” recalls Susan Drumheller, the committee’s secretary, “and came up with the conclusion that there needed to be better coordination.” To meet this need, they expanded their group to include cities, the county, government agencies, conservation organizations, and user groups representing hikers, cyclists, skiers and ATV and horseback riders. 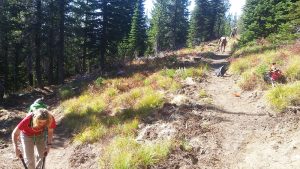 From August 2014 through January 2016, the committee worked with the Trust for Public Land (TPL) to come up with a comprehensive plan that covered the county’s entire 1,920 square miles. Their report documents and maps 660 miles of existing trails and proposes the addition of 490 more.

The plan identifies 160 of these additional miles as priorities for the next 10 years. But “trails are complicated, and they’re also expensive,” notes Drumheller. Since the committee has neither funds nor staff, responsibility for getting these trails built has been shouldered by “champions”—committee members who work on getting the land-use approvals, rights-of-way, funding, workers and materials to build particular trails.

An example of a priority is the Watershed Crest Trail, which will run around the ridge tops that form the boundaries of Sandpoint’s city watershed. The Pend Oreille Pedalers (POP), a local bicycle club, has already put the backs of its volunteers to use building the first five miles of what will eventually be a 25-mile trail. But a lot of more mundane, invisible work will be necessary before they can complete the trail.

The portions that cross land managed by the Bureau of Land Management or U.S. Forest Service will probably require some environmental analysis before the first Pulaski axe swings into federal dirt. The city of Sandpoint is likely to want to restrict its portion to non-motorized users to protect its watershed, while the state has traditionally been more open to a variety of users on land it owns. And one private landowner hasn’t responded at all to inquiries about crossing its parcel. A heroic effort is definitely going to be needed from this champion.

Now that the plan is completed and champions have been identified for priority projects, Trail Mix members are pondering their next steps. “The committee continues to be a work in progress,” says Drumheller. “Where it goes from here is an open question.” Some members are considering working together to create a website that will provide something the TPL study found was missing: a comprehensive way of finding out about the plethora of trails in the county.

Committee meetings are held monthly at the Bonner County Administration Building and are open to any interested parties (those who might know how to build a website might be particularly welcome). The next meeting is set for Oct. 27 at 1 pm.

N.B.: POP will be hosting a screening of the documentary Pedal Driven on [date TK] to help raise funds for the Watershed Crest Trail. Appropriately, the film is about building both trails and cooperation on National Forest land in Washington state.