Panhandle KRFY 88.5 radio station is a cherished commercial-free institution in Sandpoint, and community members have come to rely on it. Aside from being a community-minded forum,  it’s also a diverse, non-corporate operation and a voice for unserved and underserved groups in our area.

Aside from equipment donations, listener contributions, the spring concert at the Panida and business underwriting, KRFY only has one other income source—and it happens to be the biggest. The KRFY Fall Online Auction plays a major role in keeping the community station running throughout the year. 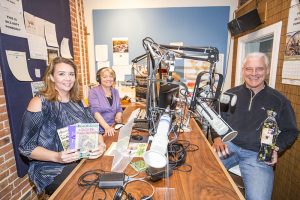 From Left to Right: Jennifer Berkey (Auction Organizer), Suzy Perez (Station Manager) and Charlie Parrish (President of the Board) hold up a few of the tangible items up for auction in the KRFY 88.5 Panhandle Community Radio Station on First Avenue. Photo by Cameron Barnes

There are eight days of bidding through Oct. 16-23, during which you can count on a plethora of items suiting your fancy.

Some of the big ticket items up for bid this year include 2017 Seattle Seahawks preseason tickets, a night at the Westin Hotel, one week in a three-bedroom penthouse on Grace Bay in the Turks and Caicos islands, 10 pounds of wild Alaskan sockeye salmon, a weekend at a Schweitzer Mountain Resort luxury condo, season passes to the Festival at Sandpoint 2017, a family membership to the Bonner County Historical Society and several expensive wines.

“We’re really inviting the community to join us in exploring the items on the auction site so that they can contribute in another important way to support community radio in North Idaho,” said Suzy Prez, the station manager. “We have a voice in our community that’s alive and helpful to spread the word about things that are good. That’s why we’re here, as well as to entertain with great music.”

The auction supports the station’s original content, including “Otto’s Eclectic Music” from 9 a.m.-5 p.m. on weekdays, the newly-added “Bioneers” at 6 p.m. Wednesday and “The Morning Show” with Chris Bessler and Suzy Prez from 8-9 a.m. Tuesday and Thursday. There’s more new content coming next year, too, as well as another possible show from affiliate UN Pacifica.

“I know that people are appreciating what KRFY brings from our talk radio in the mornings and then the drive time in the afternoons from 5-7 p.m.,” Prez said.

The station is also a Mecca for DJ training in the area, an opportunity open to anyone interested. One such show that has sprung from this DJ influence is Jackie Henrion’s “Songs-Voices-Poems.”

Music is a priority at KRFY. As a member of both Broadcast Music, Inc. and the American Society of Composers, Authors and Publishers, the station has over 88,000 songs in its library.

“We want to keep the music forefront, and we have amazing music,” Prez said.

Prez began working as a volunteer for two years, shortly after the KRFY started in 2010. It was no easy task to get over the jitters of live broadcasting.

“There were nerves in the beginning just because we also have to engineer our programs, going in and out of the automated system,” she said. “But now as far as the nerves go, I feel that edginess of nerves is actually a catalyst for something special to happen. If you back away from it, you’ll never know. I tend to like to be on the edge of terror.”

For Prez, her experience at KRFY was much like playing in a band for the first time. Although at first terrifying, the fear eventually gave way to pure exhilaration.

“I remember in the younger years, I would say no to things because I was afraid,” Prez said. “Now I’ll pick and choose my fear and say no to some things. I’m not going to say no to something that I know inside if I just got there and gulped and took a couple of deep breaths, [I’d be fine]. …  If you stumble and fall, we’re human beings. What’s the worst that can happen?”

For more information about donating or bidding in the auction, call 208-265-2992 or email [email protected] All donations are tax-deductible. To view the full list of items up for bid, check out BiddingForGood.com/KRFY.