A sign announcing the “Trogan (sic) horse” worn by a woman in a “Heather Scott” hat. Photo by Ben Olson.

On one side gathered North Idaho residents who turned out for the Bonners Ferry Comm“unity” Gathering, a rally promoting tolerance in the wake of an anti-refugee resolution passed by the Boundary County commissioners. On the other, counter-protesters carrying signs against Islam and refugees demonstrated support for the resolution. While rally organizers prepared Georgia Mae Plaza for the scheduled series of speakers, the two sides warily eyed one another from across the thoroughfare. 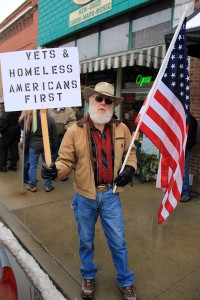 It was an almost-perfect visual metaphor for the divisions sown by controversy over refugee resettlement in America. The Bonners Ferry rally was as much an effort to restore community solidarity as a demonstration promoting tolerance.

“The way we’ve been treating each other in this community for simply speaking our minds is downright wrong,” said Pastor Brent Dehlbom.

Rally speakers themed their presentations around resisting harmful stereotypes or generalizations. Teacher Linda Hall, a Japanese woman, recalled her family’s eviction from their property during World War II. And Jolyn Horton, who has lived in several Muslim-majority countries, recalled her neighbors as friendly and accepting.

“These are just words of faith spoken by people trying to live decent lives,” she said of Islamic religious doctrine. 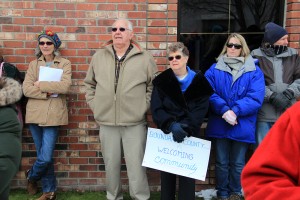 A group of supporters of the human rights rally in Bonners Ferry on Saturday. Photo by Ben Olson.

Compared to the highly contentious Sandpoint City Council meeting last Wednesday, both rally gatherers and counter-protesters maintained civility. Some scattered heckling of the rally speakers aside, the afternoon was peaceful and orderly. That was good news for Victor Watson of the Bonners Ferry Police Department.

“We’ve been planning for this event,” he said. “We’ve been assured by both sides that it would be peaceful.” 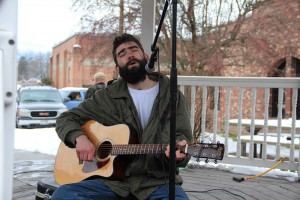 The rally ended with a song by a local musician. Photo by Ben Olson.

“The city of Bonners Ferry hasn’t taken a position [on the refugee issue],” he said before the rally began. “I’m just here to observe it.”

Nevertheless, moments of disruption did occur, most notably when Pastor Andrew Hinderlie issued a passionate call to tolerance and Christian compassion.

“Don’t tell me you’re not afraid, because you’re lying,” he told the counter-protesters, who yelled in reply, “We’re not afraid!” 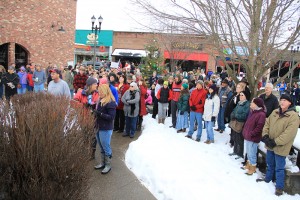 A crowd of over 160 people gathered for the event in Bonners Ferry Saturday. Photo by Ben Olson.

His speech was later interrupted by a shouted, “We can’t let these rapists into our country!” Hinderlie then observed the heckler was using his First Amendment right to protest, an American value as fundamental as the free practice of religion.

“If you deny freedom to others, you will lose your freedom,” he said.

Later, a woman from the anti-refugee faction took the stage to articulate her views. Her remarks were cut short by organizers so the scheduled speakers could finish on time, upsetting some who felt their side wasn’t represented. 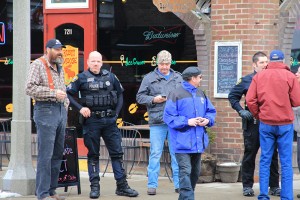 There was a police presence during the rally, but feelings were mostly civil, except for a few outburst from the protesters. Photo by Ben Olson.

“I’m against the Syrians or any Islamic peoples coming to America,” said Bill Brumley of Cocolalla. “They will not assimilate.”

The controversy over refugees, none of whom are slated for resettlement in North Idaho, won’t end with the Bonners Ferry rally. The next big moment in the debate will probably be Jan. 20, when the Sandpoint City Council will resume deliberation over a resolution welcoming properly-vetted refugees into town.