Bumper to bumper with history

For decades, two car shows have served as bookends for the busy summer season in Sandpoint: Lost in the ’50s in May and the Injectors Car Show in September. 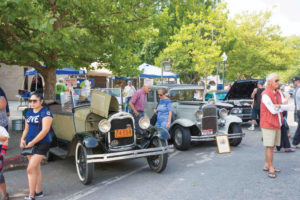 A few of the more than 100 cars expected to roll into Sandpoint on Sept. 7 for the Injectors Car Show. Courtesy photo.

Longtime Injectors President Gary Vanhorn said the annual show is a chance for car lovers to congregate over the chrome and steel that bonds them.

“This is a social club,” Vanhorn said. “To get out and meet people that like the things that you like — which is cars, working on cars, building cars, talking about cars — is important. It’s a chance for older and even younger people to get together and do stuff that everybody loves. There really isn’t enough social stuff going on out there right now.”

“We always try to give back to these local organizations,” said Vanhorn, who stressed that you don’t need to burn rubber to join the club.

“We’re open for new members all the time,” he said. “It’s a car club, not a hot rod club. So anybody that has any kind of car, they’re welcome in our club. Brand new, old classics. It doesn’t matter.”

Once a mainstay in mid-century America, car clubs are beginning to dwindle around the nation as the generations that kept them alive grow older.

“Young people aren’t interested in joining car clubs anymore, it seems,” Vanhorn said. “You really gotta think about it — being in a car club is a pretty elite thing. It’s expensive to do a hot rod. … You don’t see a hot rod every single day, but there are a lot of them in Sandpoint. Way more than you’d think.”

Vanhorn said a goal of the Injectors Car Club is to find the next generation to keep the interest alive. He said he’s “got to give the younger crowd credit” for their ingenuity in hot-rodding modern import vehicles to get the maximum horsepower out of them.

“We’d really like to convince them that our car club is for them, too,” he said of younger car enthusiasts.

Registration is open from 9-11 a.m. the day of the show, with a $20 entry fee. Independent industry judges will rate the entries in 26 different classes, awarding prizes for first, second and third place. There will also be live music, trivia, raffles and silent auctions.

“One other fun thing is the frozen T-shirt contest,” Vanhorn said. “We freeze T-shirts and thaw them out just a little. The first one to get the frozen shirt up over their head and get it on wins.”