Mountain Mafia Entertainment’s annual Mountain Havoc event is said to be “pure vehicular violence.” What that means, exactly, is probably best put by the professional drivers themselves. 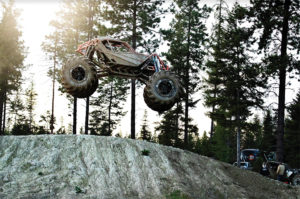 Driver Brent Harrell sends it during the Wake the Squatch spring qualifier event in April. Harrell will compete at Mountain Havoc this weekend. Courtesy photo.

Driver Justin Haft says on a trailer for the first season of “Mountain Mafia,” the outdoor brand’s TV show: “Vehicular violence in a meaning would be, to me, controlled, heavy throttle, aggressive, the will to make it no matter what. But, at the same time, you know, throttle down.”

For the second year in a row, Mountain Mafia will be filming the entire event to be made into a multi-episode TV series for the MotorTrend Network and Amazon Prime. Last year was the crew’s first time making the show, which focuses on motorsports and its various competitors, and Mountain Mafia co-founder Mac Miltz said the six-part series has been well-received. He and the other founders — Ben Spinney and Grey Whittier — own the rights to everything when it comes to the show, which created a steep but rewarding learning curve.

“We had to find our own production staff, find our own airtime acquisitions, set up filming on-site and spend countless hours with the production company editing and creating the show,” he said. “It was fun. We had a good time … Now for season two we’re way more organized, way more dialed.”

The 20 trucks and drivers competing at this weekend’s event qualified earlier this year at Mountain Mafia’s Wake the Squatch event in April. The off-road vehicles in question are equipped for insane terrain, all of which will be on display at Mountain Havoc.

“We’re always breaking down barriers and doors with motorsport and what Idaho previously thought this sport to be,” Miltz said. “We bring in the top competitors in trucks. We have some of the best sponsors. … This is the real deal.”

Friday’s Mountain Havoc events are slated for 12-11 p.m. and include the chance to meet the drivers, a Mac’s Tie Down Tow Test and the Amsoil Hill N Hole Jump Track. Saturday’s events, which will run 8 a.m.-11 p.m., include a bouncer climb, rock course, Octane music in the evening, food, drinks and prizes. Sunday will feature the Tuff Country Mountain Man Extreme Course and an awards presentation, with the event running 8 a.m.-6 p.m. in its final day.

Camping at Mountain Havoc is free. Pets and drones are not permitted. Children under 18 must be accompanied by a legal guardian. Since Mountain Havoc is a spectator-only event, the Mountain Mafia team requests everyone leave their toys at home.

Admission into Mountain Havoc is $30 for adults and $10 for kids ages 6-12. Kids five years old and younger get in free.

Find more information at mountain-mafia.com or call 208-255-9861 with questions.