We live in a rural town, so most of us are used to seeing a big ol’ combine just crawling through a field. I’ve had a few friends that lived in cities their whole lives, were well-educated and came from families with a lot of money get one look at a combine and ask me, “What’s that big green army tank doing?” 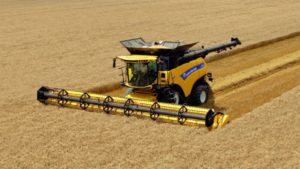 Combine harvesters are pretty incredible machines. Before them, a farmer had to go out into the field by himself or with seasonal hands to manually collect his crop. Before that, it was done using slaves. I’d like to think combine harvesters helped make life better for everyone.

You must wonder how running over your crops harvests them. That’s done with a header, or a specially designed harvesting tool that’s fitted onto the front of the combine. These headers are different depending on the crop you want to harvest. A basic header for wheat grains is equipped with a cutting blade that cuts the wheat, which is then fed into the combine and onto a set of conveyors. Inside the harvester, there is a rotating tool called a thresher or a threshing drum that removes the grains from the stem with centrifugal force. The grains are separated, going into a grain elevator that pulls them up the machine and deposits them in the grain tank. The straw and stems are filtered through the combine harvester through a series of conveyor belts, run through a device that chops it up and then spits it out the back.

This process varies from model to model and crop to crop, but that’s the gist of it.

With all of the straw that’s spit out the back of the harvester, farmers are left with a couple of options. They can till it back into the soil which can add nutrients to the next crop being grown, or they can drive over it using a tractor pulling a baler, a specially-designed machine that creates straw bales which are then deposited on the field to be collected later. These bales are later either sold to ranchers or other buyers to be used as animal food and bedding or kept for the farmer’s own animals.

So how does the grain get from the combine to your bowl of cereal?

Once the grain tank is full or the harvest is complete, the harvester has a special pipe called an unloader that extends out and over a grain trailer pulled by a tractor. An elevator inside the unloader pulls the grain up and pushes it out and into the trailer. Once the trailer is full or the grain tank is empty, the farmer then transports the grains to be sold. After that, a whole bunch of stuff that we’ve been doing for thousands of years happens to create flour by the ton, which eventually gets turned into your cereal. We’ll talk about that another day.

There is a combine for just about every harvesting job. Harvesting cotton has a particularly nasty history. It is very delicate work to harvest cotton, work that required a human touch. However, paying several hundred people to pick cotton per farm cut too deeply into profits for plantation owners, which began the great human tragedy of American slavery. While the Emancipation Proclamation was signed into law in 1863, America was still in the middle of the Civil War at this time, and slavery continued in the south. Despite the fact that the Civil War ended, and slavery was legally abolished in the re-United States on April 9, 1865, word traveled slowly in 1865 and laws were difficult to enforce on rural slave owners that continued using African-American slaves for months until at least June 19, 1865, celebrated to this day as Juneteenth, or Freedom Day.

While that’s not about combine harvesting, it’s an important piece of American history that everyone should know about. Especially right now.

In the 1920s, a combine harvester was developed to pick cotton and help prevent another atrocity like human slavery from ever happening in agriculture ever again. There are two different types of headers for cotton harvesters. One strips most of the plant away, then separates the light lint fibers from the heavy plant matter and pushes them in two different directions. The other uses rapidly-spinning barbs that grab the lint and fling it into the machine, where it is sucked up an elevator into a baler built into the back of the harvester. Once enough lint has been collected and compacted, the harvester poops out a big white bale of cotton weighing about 21,000 pounds.

Yep, there’s a harvester for everything you can grow in a field. Potatoes? No problem. Sugar beets? Oh yeah. Corn? Come on. Sugar cane, oats, rye, barley, hops, canola, soy, rice. If it ends up in your cereal, it probably passed through a combine harvester at one point.

Well, except for the milk.

I don’t think you want your cow to pass through a harvester at any point.

Until they make a hamburger harvester, we’re just going to have to process those the old fashioned way.