In the immediate days following Sept. 11, 2001, I sat for a junior-year class called “Apocalyptic Literature” at then-Albertson College of Idaho. I remember the professor dropped a pile of newspapers on the seminar table, saying our previously assigned texts wouldn’t be enough — that the record of our contemporary existence described “apocalyptic literature” in a more immediate, and historically important, moment.

Almost two decades later, so many pieces of real-time media feel like they can be classed as apocalyptic literature; among them, the HBO Max series Raised by Wolves, from executive producer Ridley Scott, who directed the first two episodes. 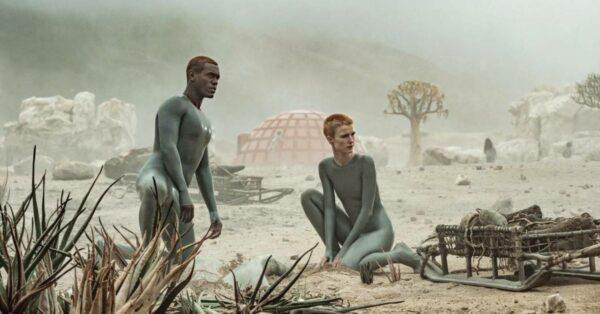 A screenshot from ‘Raised by Wolves.’ Courtesy image.

The mind behind the Alien franchise, as well as the iconic film adaptation of Philip K. Dick’s Blade Runner and The Martian, among many others, Scott has long trafficked in Armageddon and extremis. Raised by Wolves fits hand in space glove with his earlier works, and — based on the first few episodes — tailored for our times.

Set in the 22nd century after a religious war has burned Earth to a cinder, the show’s aesthetics conjure Mad Max-meets-Apple Store. In this slick and dangerous reality, humanity has fled aboard a literal Ark, called Heaven, shot into the ether to preserve the last remnants of the species under the dominion of a theocratic order of latter-day crusaders.

Bound for Kepler-22b, these “Mithraics” enter orbit at their new Eden a dozen years after a pair of androids — aptly named Mother and Father and sent there by the Atheist faction — have already tried and failed to raise a litter of human children. Of the six kids in the colony, only one remains and Mother is malfunctioning — dangerously so, as she appears to be a weapon of war halfway repurposed into a caregiver.

Campion (Winta McGrath), the only child to survive the harsh climate and doubtful parenting of Mother and Father, is a living metaphor for humanity’s struggle to survive the capriciousness of a universe that is by turns uncaring and malevolent. The androids, meanwhile, evoke all the failings that human parents feel on a daily basis: whether our kids are being adequately fed and clothed, what kinds of ideas we’re planting in their heads and what they might grow into, whether our efforts at protecting them do more harm than good.

Not to spoil things, but a struggle for the continued existence of humankind ensues between the Mithraic and Atheist way of child rearing, the former led by marooned Mithraic Captain Marcus (Travis Fimmel) and Mother (Amanda Collins). The former brings an ambivalent menace to his role as a conflicted warrior, a mood that fans will recognize from his turn as Ragnar Lothbrok in Vikings. The latter is positively bone-chilling in her cyber-Tiger Mom intensity. (Talk about “mom voice,” this Mother has some pipes.)

In the year 2020, with everything in the West on fire, a continuing pandemic, unabated political division and all the struggles that attend those disasters, Raised by Wolves is an apocalyptic piece of art for our time — particularly as it relates to the fraught nature of parentage in these messed up times. Some critics call the show plodding, didactic and/or confused, but, again, that seems par for the course these days.