The Sandpoint City Council adopted the fiscal year 2020 budget at its regular meeting Aug. 21, putting its seal of approval on more than $39.32 million in expenditures — $5.21 million less than FY2019, attributable to the reduction in some grants, Sandpoint Urban Renewal Agency funding and wastewater projects. However, absent from the budget was $8,000 requested by Mayor Shelby Rognstad to fund the Social Equity and Inclusion Initiative, which council members voted to nix, citing concerns that it represented “a very slippery slope,” as Councilman Joel Aispuro described it.

Aispuro made the motion to approve the budget, sans inclusion initiative. 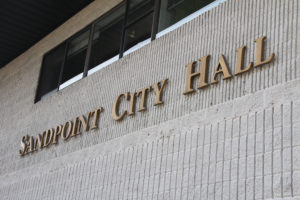 Reduction in grants alone will account for a $2.58 million decrease in spending, including $500,000 less spent related to a previous joint powers agreement for Selkirk Fire under which only the Sandpoint portion will remain. Two SURA projects have been removed from the new budget: the Baldy Pedestrian Capital Project is on hold pending master planning, resulting in a reduction of $685,000, and $1.6 million budgeted last year for sewer line upgrades along Boyer Avenue was left out “as that property has not sold and final plans for that site have not been developed,” according to the budget narrative.

As the budget narrative put it: “Sandpoint is a distinctive city that has been discovered. This fiscal year we have experienced significant growth and development pressures and we expect this to continue into the next fiscal year.”

Much of the budget for FY2020 focused on master planning, which is set to conclude by the first quarter of next calendar year. Stapleton spoke on the Parks and Recreation Master Plan, which underwent a round of public input on Aug. 14, telling council members that “there’s lots of debate about where this money is going to come from.”

She went on to explain that $240,000 has been allocated for priority projects from cash on hand, including parks impact fees, the parks capital improvement fund, local option tax and rec fund.

“We have budgeted cash that we have on hand for those projects that come out of this master plan,” Stapleton said, adding that a further $10,000 will go toward trail maintenance in the Sandpoint watershed — a partnership with the Pend Oreille Pedalers bike group.

War memorial Field will receive $2.7 million from the local option tax through the life of the tax, which sunsets Dec. 31, 2020.

The majority of budget discussion both by the Council and those testifying at the meeting centered less on the big-ticket items — such as an underground utility project along Sand Creek that will see the installation of downtown fiber infrastructure and buried power lines between the old Arlo’s building and Beet and Basil — and more on the inclusion initiative.

Councilman Bill Aitken attempted to dispel the unfounded suspicion by some that Rognstad intended to hire his new spouse — with whom he is currently out of the country on their honeymoon and thus unavailable for comment, though the Reader did reach out — to administer or otherwise be involved with inclusivity training under the proposed initiative.

Nonetheless, some members of the public who testified Aug. 21 continued to erroneously speak as if Rognstad intended to do just that.

After the meeting, Aitken clarified his comments to the Reader.

“My point was to try to head that off and not have those comments that that was his intent,” he said, adding that nonetheless he was “uncomfortable” with the initiative.

“I think it sets a dangerous precedent,” Aitken said.