With the release of their first album, “River Dolphin,” last week, Sandpoint band The Wow Wows have established themselves firmly as a musical force to be reckoned with.

The band formed after frontman Hunter Jones met and began a relationship with frontgal Casey Calhoun a couple years ago. Hailing from Rathdrum originally, Jones followed his heart and moved to Sandpoint, and the two began experimenting with a new sound, Jones on vocals and electric guitar, Calhoun on the vocals and bass. 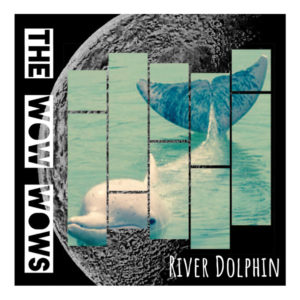 The album art for “River Dolphins.

Jones’ friend Dylan Darrington joined on the rhythm guitar and contributing vocals, and drummer Jeremy Kleinsmith of the band Tennis recently rounded out the band to make it a quartet.

Jones describes the band’s sound as “alternative indie psych rock,” which is about as close as words can come to classify their music. Their songs usually lay down an even, driving bass line that maintains the foundation for Jones’ electric guitar work fluctuating between rhythm chords and lead lines. Adding in a synthesizer and pedal-driven sounds throughout, the Wow Wows achieve a perfect balance of hard-edge that is easy to listen to. Darrington’s distorted hollow body guitar rhythm chords add a mysterious backing to the songs, while Kleinsmith’s flawless, dynamic drum lines keep your foot tapping throughout.

Jones and Calhoun take turns leading songs, each of their voices adding a unique signature to the mix. In the second track, “Whatsoever,” Jones’ catchy guitar riffs and mousy voice build a soundscape that makes the listener feel as if they are suspended in ether. Or like that goo inside a lava lamp. Calhoun’s sultry, smoky voice drive songs like “Blue Van” and “Denture Queen” to a smooth finish.

“She’s My Lover” has a Lou Reed vibe to it, with succinct guitar solos blending the mix perfectly, and “Too Bad” is sort of a melancholy punk dirge that grows on you more with every listen. 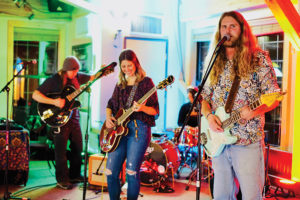 Recorded in Sandpoint by Kevin Dorin, “River Dolphins” is a great first effort from this Sandpoint band offering a fresh breath of different style to the sometimes stagnant Sandpoint music scene. Their next show is June 1 at the 219 Lounge. Buy the album and play it on a quiet back road drive during the next solar eclipse – the world will make more sense that way.

You can also stream the album online with Spotify.