Knee-deep into the presidential primary season, one name has dominated the national attention more than any other: Donald Trump. His seemingly unstoppable campaign shows no signs of slowing down, distressing Democrats, independents and establishment Republicans alike.

Then again, it’s still an open question how Trump will hold up in the general election. I wanted to really put his campaign through its paces, and thanks to the 2016 edition of the computer game “The Political Machine,” I was able to do just that. 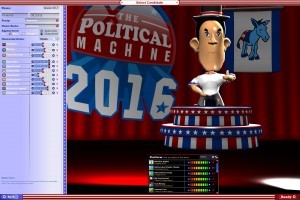 “The Political Machine” is a strategy game that challenges you to manage a presidential campaign from the party nomination to Election Day. Each candidate’s strengths and weaknesses are ranked through statistics, as is his or her stance on the pertinent issues, which influence popularity from state to state. The objective is to win the White House through smart management of speeches, television appearances, advertising, staffing and other resources. 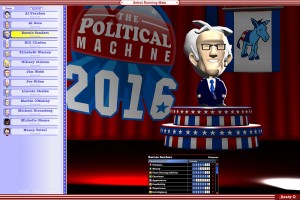 So who can stand up to the machinations of the Trumpster? Sure, Hillary Clinton and Bernie Sanders have their strong points. But using “The Political Machine’s” candidate creator, I decided to bust out the big guns. Yes, you guessed right: professional wrestler and actor Dwayne “The Rock” Johnson. It worked for Jesse Ventura; it can work again.

As you can see from the screenshots, The Rock combines his movie star charisma and good looks into a heady political brew, but he’s weak on government experience. Because he is in touch with the people, he keeps his style casual with muscle shirts and torn jeans but also wears a patriotic top hat. For America. 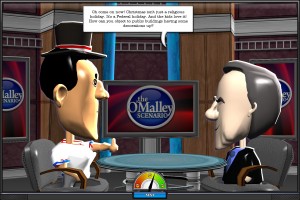 It’s also clear The Rock embodies the spirit of optimism our country so desperately needs. This is most evident in his perpetual thumbs up. Seriously, he never stops giving a thumbs up. He might be physically unable to relax his left hand. It’s actually a very sad story.

As far as campaign clout is concerned, The Rock brings significant personal wealth to the table but lacks the fundraising know-how of professional politicians. What’s more, The Rock can smell what mankind is cooking: the earth. Through climate change. And he doesn’t like it.

Leading with an environmental platform, The Rock grabs a surprise Democratic nomination and begins his campaign by shoring up support on the West Coast. It’s not long before California, Washington and Oregon are bluer than a smurf’s ass. But those were easy victories. Will The Rock’s no-nonsense physicality appeal to Middle America? 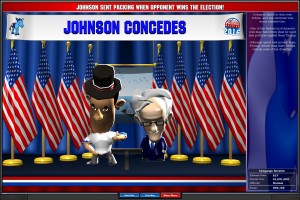 According to early polling, it does indeed. The early leads in all but the reddest of states are imposing. And they only grow thanks to an impressive showing on “The O’Malley Scenario,” where The Rock withstands an aggressive grilling by Bill O’Malley over the war on Christmas.

That enthusiasm is short-lived. As the weeks drag on, Trump’s focus on spending and generating political capital begins to bear fruit. He soon has valuable endorsements from conservative Christian and foreign policy organizations. The Rock begins to slip in the polls.

The political hemorrhaging is stymied when it comes time to select a vice president. The Rock taps Bernie Sanders, counting on the senator’s enthusiastic support base to propel him to victory. Trump, meanwhile, selects Marco Rubio, who is apparently very quick to forgive all the times the billionaire called him a “child” or a “tiny boy” during the primary. Somewhere in New Jersey, Chris Christie drowns his sorrows in a bag of Doritos.

Alas, it is all for naught. As Election Day approaches, no advertising campaign, speech or television appearance by The Rock seems to make a dent in Trump’s polling. The Democratic campaign staffer that was so enthusiastic months ago now resorts to pathetic self-delusion. “Things are revving up for Dwayne!” he cries. “Just you wait and see!”

The worst fears are confirmed on Election Day, when Donald Trump hands Dwayne “The Rock” Johnson a crushing defeat. The Rock consoles millions of broken hearts in his concession speech, his dejection evident despite an unwavering thumbs up still held high.

So what do we take away from this experiment in computerized campaigning? You could, I suppose, chalk up the loss to my inexperience with “The Political Machine.” On the other hand, if The Rock can’t beat Donald Trump, who can?

Perhaps it’s time to make room in your heart for the United States of Trump.