‘I am proud to be a veteran’

For the first 30 years after my service I never thought much about Veterans Day. To me it was just another day that brought up more bad experiences and intrusive thoughts.

Now I enjoy Veterans Day because I have dealt with my demons and traumatic experience through counseling through the VA hospital in Spokane as well as the Vet Center in Spokane, so I am very comfortable talking about my tour of duty and enjoy answering any questions someone might want to ask.

Russ Fankell rides in a helicopter during his service in Vietnam.

I got my draft notice then enlisted in the Army for two years from November 1968 to November 1970. After basic training and AIT (Advanced Infantry Training), I landed in Vietnam May 5, 1969.

I was assigned to the 1st Air Cav 2/12 D Co., which was an infantry line company 75- to 100-percent full strength. We were helicoptered to the jungle, and we were tasked with damaging as much as possible the NVA (North Vietnamese Army) and VC (Viet Cong). I left Vietnam April 10, 1970.

In the late 1990s I was introduced to the Vietnam Veterans of America (VVA) — a veterans organization chartered by congress — which had a chapter in Coeur d’Alene at the time. This group of fellow veterans impressed me so much that I got involved and went to a leadership convention in Tucson, Ariz.,in 2002 to learn more.

They are very structured and have a great constitution and bylaws. These men and women are not a good ol’ boys club. They have done so much not only for the Vietnam vet, but all veterans. Through their national board of directors, state council president and their members they have been the driving force to attain benefits for veterans.

If it was not for the VVA there would not be any PTSD, Agent Orange or the 30 illnesses/diseases — including 18 cancers — recognized by the Veteran’s Administration as connected to Agent Orange herbicide exposure.

You can find more information at vva.org. Click on “what we do,” “outreach programs,” then select Agent Orange and scroll down to the self-help guide. Then you can explore the service-connected disabilities for exposure to Agent Orange for veterans and their families. 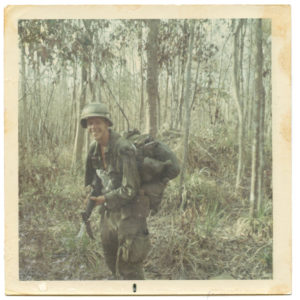 Because of VVA, I found a home with someone who went through the same things I did and wanted to help. I was fortunate to be a part of this and to see it first hand on a national level when I was Idaho State Council President of VVA for four years and traveled to Silver Springs, Maryland three times a year for BOD and SCP meetings.

At these meetings they have some 11 different committees that brainstorm on how to help Vietnam veterans as well as all veterans and their families. I belonged to two committees — POW/MIA and Veterans Against Drugs — and found some very interesting facts about POW/MIAs.

I am proud to be a veteran and proud of what I did in the military. I did what I was told and did my job very well. I am also proud to be in the three veterans organizations: VVA, The Disabled American Veterans and the American Legion here in Sandpoint. Other important organizations in town include the Marine Corps League and the Veterans of Foreign Wars.

We have a large veterans population in Bonner and Boundary Counties and a lot of veterans organizations as well. They all have their own way of helping veterans and their families, as well as the community. We all participate in different things and since 2002, I have carried the VVA flag in the Fourth of July parade.

This year at the Fourth of July parade I was very disappointed because we did not have enough veterans to carry the POW/MIA flag as well as all the branches of service flags. We have a large population of veterans but still not enough to be willing to help in a parade by carrying a flag.

We have all these organizations but very few join. It is impossible to know and call every veteran in the community, but I am pretty sure they all know where the VFW Hall is. It is listed when the organizations have their meeting and different functions in the community. In case you don’t know where the VFW Hall is, the address is 1325 Pine St. (on the corner of Pine and Division).

If a veteran needs help or has a question about VA benefits, the VA does not come to you. You have to go to them and find out the information you want. If you want to learn more about how you can participate with local veterans in Sandpoint, please contact the VFW at (208) 263-9613.

Each organization is very good at what they do, so pick one you like and help out. We hope to see you next year carrying a flag in the Fourth of July parade.