The Thai that binds

My favorite entrees at Secret Thai

When describing the prototypical “reporter” smell that oozes from our palatial headquarters on Cedar Street, Reader News Editor Lyndsie Kiebert-Carey listed the lingering aroma of Thai food containers from our shared garbage can, along with newspaper ink bleached in the sun, stale beer and lost dreams. Well, I added the latter, but I digress — this is what the Reader would smell like if we were a scratch-and-sniff sticker.

Needless to say, we eat a lot of Thai food at the Reader.

My first experience eating authentic Thai cuisine was in Thailand. I had traveled there after a devastating tsunami hit on my birthday in 2004, killing more than 100,000 people. I volunteered with a humanitarian organization that focused on rebuilding destroyed communities.

After arriving in Bangkok, the first goal was to eat as much local fare as possible. My very first dish was a simple meat-on-rice affair, eaten at a roadside cafeteria frequented by cross-country buses. I don’t even remember what it was, only that the server tried to warn me away. Undeterred, I took one bite and my eyes lit up. The flavors were incredible, like discovering a whole new food group. Then the heat hit and I physically slumped in my chair, mouth burning while the server laughed at me.

I can handle spicy food, but this was a realm I had only heard about in folklore.

Dragging myself up to the table, I continued with the dish, breaking to mop sweat from my forehead every few minutes. It was the hottest — and most delicious — dish I’d ever tasted.

Nearly two decades later, I’m still a sucker for Thai food. Rarely a week goes by when I don’t eat at one of our two excellent Thai restaurants: Thai Nigiri and Secret Thai. Next week we’ll write about the sushi at Thai Nigiri, so, this week, I’m focusing on my favorite dishes at Secret Thai which bring me back to those hot days in Thailand. 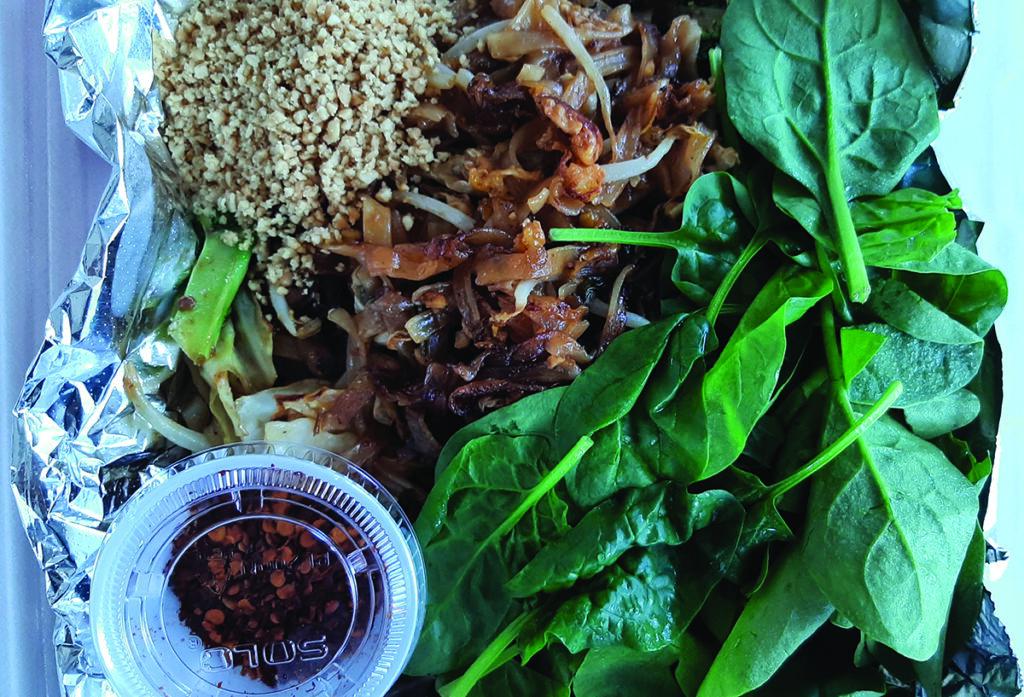 Being the national dish of Thailand, pad Thai is probably its most globally recognized food. It’s a simple concoction of noodles, tamarind sauce and vegetables that is quite complex in its flavor combinations. Pad Thai is sold everywhere in Thailand, but the best is usually found at cheap street stalls where they’ve perfected the recipe for years.

The key to a good pad Thai is the fusion of sweet and savory flavors, with a slightly salty and nutty taste to the sauce, complemented by the addition of ground peanuts sprinkled on top.

At Secret Thai, pad Thai comes with thin rice noodles, bean sprouts, green onion and egg, with a topping of ground peanuts, of course. You can order with chicken, shrimp, beef, tofu or with fresh vegetables, which means the addition of spinach and other fun stuff. It’s a dish that can be eaten twice — once for dinner, then again for leftovers, since the portions are ample.

Though technically a Chinese dish, cashew chicken is so common in Thailand that it has graduated to being Thai food in its own right. The most noticeable difference between the Chinese and Thai versions is that the Thai sauce is a bit more complex — it has that classic savory-sweet combination, with a tart, peppery flavor that already has my mouth watering. It’s definitely a step above the cashew chicken you might have tried at a bland Chinese buffet in the past.

In the world of stir fry dishes, cashew chicken reigns supreme. It contains chicken pieces, roasted cashew nuts, broccoli, onion and bell pepper in an oyster and soy sauce seasoned to perfection at Secret Thai. The flavor combination of meat, veggies and roasted cashews creates a sauciness, which, when added to the white rice accompanying the dish, blends into one of the most popular dishes at Secret Thai.

You can also substitute meats, or order with tofu or fresh vegetables. 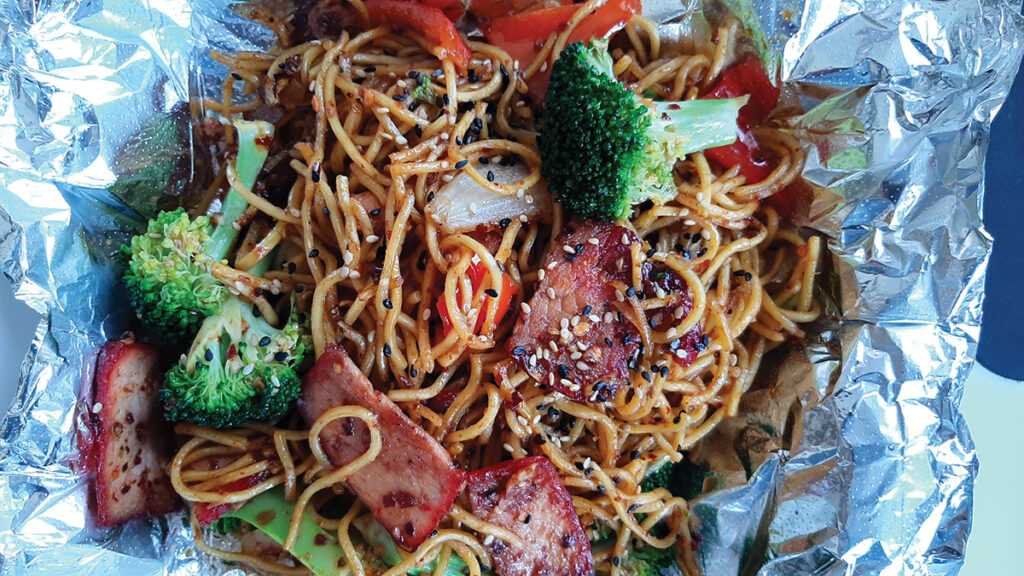 Yakisoba is a street food staple first originating in Japan, but Lyn at Secret Thai has made it her own. It’s a sneaker favorite entree of mine, checking off so many boxes. The noodles are rounder than pad Thai noodles, with a bit more al dente texture. They are cooked in a chili paste sauce with sautéed onions, broccoli, cabbage and bell peppers.

The final — and most delicious — addition to this plate is thinly sliced Chinese style barbecued pork. This comes in a reddish color due to the marinade used to cook it, which contains red bean curds. Unlike American-style barbecue, which is based on tomatoes, the Chinese barbecue flavor contains hoisin sauce, soy sauce and red bean curds, along with other spices. The resulting taste is sweet, with a slight fermented flavor that stands apart from any barbecue you’ve had in the Western world.

Combined with noodles and vegetables, this dish is the first one I recommend to people who haven’t yet eaten at Secret Thai. You can substitute the pork for shrimp or order vegetarian style, but I think much of the taste comes from the meat, so vegetarians be warned. 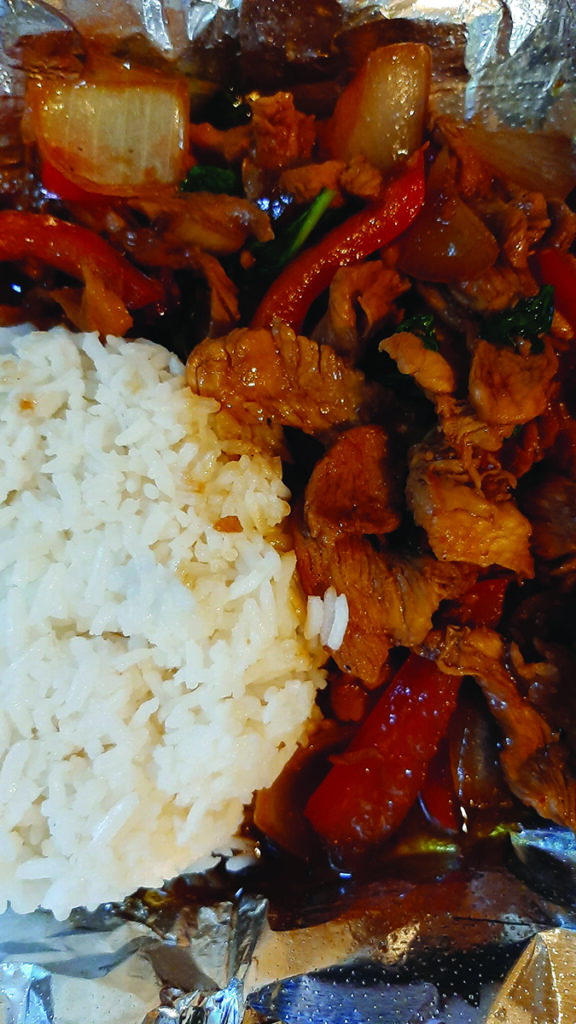 Also known in English as “spicy Thai basil chicken,” this is one of the most unique flavors at Secret Thai. Containing chicken stir fried in a rich, spicy brown sauce, garlic and vegetables, the magic comes from the addition of Thai holy basil, which is a variety of basil with rough leaves that has an almost peppery, sour flavor. Thai holy basil is not the same as Thai basil or regular basil. There really is no substitute. If she runs out of this key ingredient, Lyn won’t make the dish because the flavors just wouldn’t be the same without it. This authentic Thai dish is often served with a wok-fried egg on top. If searching for it online, there are multiple spellings, but the dish remains the same.

There are many other excellent dishes at Secret Thai, each served with love by Lyn, (one of the hardest working chefs in Sandpoint), but those listed above are my absolute favorites.