You’ve probably never called them by their actual name. Let’s be honest, we all know them as stink bugs. This is accurate, because they are bugs that stink when you startle them, but actual stink bugs are a different family of bugs altogether. 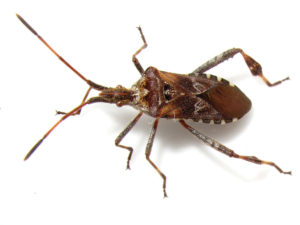 Every September through October, we become overrun by these stupid things. They get everywhere. In your car, all over your doors and windows, into your computer. Heck, I have found them in my food before. Of course, you can’t do anything about them, because as soon as you offend them your nostrils are assailed by that awful acidic stench.

They actually feed on the sap of conifer cones, which permanently damages the cones. This causes substantial damage to Douglas Fir populations, especially in places where the bugs begin to outnumber the cones of the trees they feed upon. Unfortunately for the trees, humans have been unintentionally helping these stinkers move to new feeding sites. They’ve also been observed feeding on flowers.

Our houses don’t make cones, though. Why do they flock to our homes? Once the temperature drops enough in September, they instinctively seek shelter for the winter. Our homes are warm, and the bugs are small enough to fit into cracks and crevices that are well insulated, increasing their odds of surviving to usher in a new wave of irritating insects the following year.

Each generation of these guys lasts for about a year in our neck of the conifer woods. The closer to the equator they get, the shorter their lifespans are, and more generations can occur in a single year. In Mexico, there are up to three generations a year. Muy apestoso!

The United States and Mexico aren’t the only places suffering from the pestilence of seed bugs. Due to globalization and the prevalence of U.S. timber being exported to Europe and Asia, they have been reported as far away as the Czech Republic and Tokyo, Japan. Kimochi warui!

These guys feed using a proboscis, which is basically like a straw. Mosquitoes use a specially-adapted proboscis that pierces skin to suck blood, but these guys are annoying in a totally different way. Western conifer seed bugs can’t pierce your skin. In fact you probably wouldn’t even notice if it tried (and they have tried in laboratory settings under observation when provoked).

Western conifer seed bugs go through multiple stages as they grow. They begin their life in a cluster of eggs, usually laid on the needles of pine trees they’ll prey upon later in life. They develop into nymphs, which look like smaller, scrawnier, uglier versions of what they will eventually grow into. There are several pictures online, in case you’re curious of the secret side of these little weirdos we don’t get to see.

I’m sure you’ve noticed they buzz when they fly, and they almost look like a bee with the yellow and black markings on their abdomen. This is likely an adaptation to ward off predators. They utilize their predator’s instinct to be wary of, and react to bees before double-checking to make sure it is in fact a bee. This is their first defense mechanism.

The second is their stink. This may be equal parts evolution and habitat. You know what they say: You are what you eat. In this case, they eat a lot of pine, fir and cedar sap, which could help augment their… uhh… earthy aroma. They’ve been recorded to have many different smells depending on diet or what they’re engaged in doing. They may even use these smells as a means to communicate with each other.

Now usually I give biology a fair shake. I find fascinating traits in sharks. I find beauty in killer lizards. I look for wonder in the destructive beauty of exploding stars. This is where I draw the line. When biology invades my house every year for my entire life, dive bombs my face every September and has the audacity to stink at me for trying to evict it, that’s when the kid gloves come off. I’ve got no love for the western conifer seed bug, not even a morbid fascination.

They’re obnoxious little dudes, but they’re also harmless enough in our homes that it doesn’t warrant dousing them with toxic chemicals. Let’s be honest, you shouldn’t do that to any insect (except for Zika/West Nile/Malaria mosquitoes), as there are always more natural alternatives. Chickens eat your bugs and make your garden grow. If your house is being invaded by armies of these guys, there’s not much you can do. Replace damaged screens, caulk gaps in your wood, seal or replace damaged plastic siding and don’t leave your windows open. Normally, I’m all for “No, don’t kill the bugs, they have a place in the ecosystem!” but these guys are straight up pests that have adapted to resist most all predators and explode in population, and they damage our forests, so I say: murder away. If there’s a swarm on your door, plug your nose and take a broom to them. Their population will recover those 37 you eradicated, trust me.

While they resist predators, they’re not immune to them. Your friendly neighborhood woodpecker is happy to clean them out of the cracks in your siding and edging around your windows once winter rolls around. Being woken up at 6 in the morning for a week by incessant banging is a small price to pay if I can have the solace of knowing Woody is helping keep the beautiful forest a little healthier.