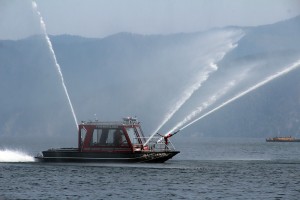 The Timberlake Fire Boat demonstrating the spraying capability off shore from Bayview. Photo by Ben Olson.

At the Bayview public dock earlier this week, life seemed to be returning to normal. Kids splashed in the water as the temperature hit the mid-90s again. Chris’ Patio Bar on the water had the Rolling Stones pumping over the loud speaker while customers sat under umbrellas and sipped cold bottles of beer.

Above the town, the steep hills of Cape Horn looked better than it had in days. Wind had blown the majority of the smoke away, and revealed some bald spots. Small wisps of smoke advertised hot spots that remained to be doused.

It’s been over a week since the Cape Horn fire broke out and burned over 2,000 acres. As of today’s writing, almost 500 fire personnel have held the fire at bay. It is currently 70% contained and has been reduced to around 1,300 acres.

Six homes were lost due to the fire, but if not for a special segment of firefighting personnel, the number could have been a lot higher.

The Timberlake Fire District fire boat is an impressive machine even while sitting idle at dockside. The boat has been built for function, with an enclosed cabin sitting atop a rugged, welded aluminum deck festooned with water guns. 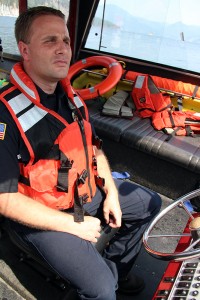 Brandon Hermenet at the helm of the Timberlake Fire Boat. Photo by Ben Olson.

Hermenet, a member of Timberlake FD for three years, was on hand shortly after the fire was reported on Cape Horn.

“We saw several fires down the hill below the houses,” he said. “The hand crews weren’t able to reach those areas, so we were able to get it knocked back using the fire boat. Also, because of our position on the water, we were able to see the hotspots better and communicate with the crews.”

With five deck-mounted water guns that spray 1,000 gallons of water a minute up to 400 feet, Hermenet and crew were able to access these hard to reach areas and were credited with saving a half a dozen homes from being destroyed by wildfire.

“We can tie up to the dock and run our hoses off the boat, just like we would our fire truck,” said Hermenet.

The jet engine that powers the boat has a special butterfly valve that diverts the water into a separate hose that feeds the five deck guns. The boat operator can control the amount of water that is fed to the guns, allowing the boat to retain steering control with the main jet. Additional crew members can man the deck guns and direct the flow of water, or the guns can be fixed in place and the water directed by the boat’s position in the water.

Fire boat crews train for this very contingency, though it’s rare to use them to fight wildfire. Most calls involve boat or structure fires, along with the occasional search and rescue mission.

“The fire boat is an extremely valuable tool to protect the marina and the homes along the shoreline,” said David “Rudy” Rudebaugh, Timberlake Fire District Chairman of the Board. “It is very rarely used to fight wildfire.”

“Without the use of the fire boat,” said Hermenet, “we would’ve lost a lot more structures.” 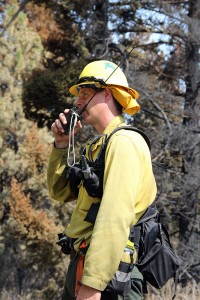 A member of the Missoula crew directs his firefighters up the hill at the Cape Horn fire. Photo by Ben Olson.

Today, fire crews made great progress building fire control lines down the steep Three Sisters Ridge on the north flank of the fire. Three hotshot crews directed a coordinated attack directly on the fire’s edge in an attempt to eliminate the need for a large scale burn-out operation.

Though the fire at Cape Horn is hopefully going to be 100% contained in the next week or two, local fire crews are ever on the alert for the next outbreak in this long, dry fire season that kicked off six weeks earlier than normal.

“We’ve had more fire activity within the last two weeks of June than all of last year,” said Hermenet. 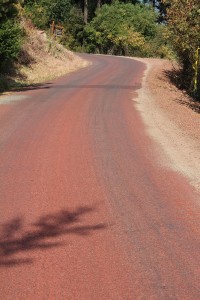 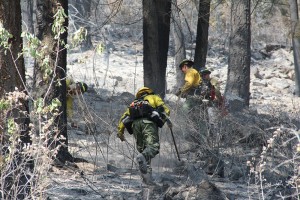 The Missoula crew at the Cape Horn fire mop up some hot spots. Photo by Ben Olson.