The Sandpoint Eater: Worth its weight

I used to look forward to attending the Summer Fancy Food Show at the Jacob Javits Center in New York City. It’s the largest food industry event in North America and the premier showcase for launching new products. It was the place to see (and taste) the latest in culinary innovation, long before new products hit the market shelves. I had to attend on behalf of my top-shelf catering and event clientele, who loved the notion of being the “first” to serve some new, fancy food accoutrements on their tabletops. These showcase products had everyone all abuzz and we lined up to taste single origin chocolate, floral infused syrups, fancy shelf-stable pastries and even salt.

Ever since I was a kid, I’ve had a penchant for salt. Back then, I especially liked the coarse, animal-grade salt that came in 25-pound bags, sliced open with a pocketknife and poured into tubs made from worn out tractor tires. I loved popping a few of the salty crystals and letting them melt against the roof of my mouth.

Later, when I got married and moved to a ranch in remote Montana, those big, 25-pound bags of red clay-speckled salt were omnipresent. With a big herd of mother cows, calves and yearlings, we went through tons (literally) of salt. So much, in fact, that once a year we’d load into the old Mack semi and head to Redmond, Utah, to buy our minerals direct from the salt mines, operated by Redmond Mineral Company, whose salt deposit is the remnant of an ancient inland sea that covered much of North America millions of years ago.

On one visit, after our flatbed was loaded and we were wrapping up the paperwork with the bookkeeper, I mentioned how much I loved using my mortar and pestle to grind a pinch or two of the livestock salt for my own gastronomic pleasure. Apparently, I was not the only one using the salt for human consumption, and I was sent home with a couple of 8-ounce boxes, packaged for their friends and family.

Nearly 15 years later, my salt worlds collided in one in one of the huge, long exposition halls at the Javits Center. Though it was rebranded as Redmond Real Salt and all dressed up in fancy packaging on an oversized display, I instantly recognized my old friend — and learned it wasn’t just for cows anymore. In fact, today it’s the leading natural salt sold in the United States. For the same price I used to pay for one of those big, brown bags of salt (about $5.99), I can now purchase a 10-ounce shaker from Winter Ridge.

There’s no shortage of types of salts on the market today, and it seems as though the fancy salt fad is here to stay. In my cupboard alone, I have more than a dozen different flavors that include smoked salt, truffle, rosemary, lavender and saffron, and even different sizes of salt: finely ground for baking and cooking (and popcorn), coarse ground for seasoning and brining, kosher for rubs on prime rib and potato jackets (not to mention margaritas) and delicate flakes — English Maldon is my all-time favorite — perfect for any finish.

Salt is essential for life in general, and saltiness is one of the basic human tastes. It’s one of the oldest and most universal food seasonings, and salting is an important method of food preservation. (I especially noted this when I visited Thailand, Vietnam and Cambodia — there were dozens of varieties of dried and salted fish, hanging in every market).

I learned from Wikipedia that there is evidence of salt processing dating back to around 6,000 BCE, when people living in the area of present-day Romania boiled spring water to extract salts. A salt works in China dates to approximately the same period. Salt was also prized by the ancient Hebrews, the Greeks, the Romans, the Byzantines, the Hittites, the Egyptians and the Indians. Salt became an important article of trade and was transported by boat across the Mediterranean Sea, along specially built salt roads and across the Sahara on camel caravans. The scarcity and universal need for salt have led nations to go to war over it (and use it to raise tax revenues). Salt is used in religious ceremonies and has other cultural and traditional significance.

If I can’t have the real thing, my favorite seasoning replacement for salt is pure, fresh lemon juice. Lucky for us, one of my favorite recipes marries two of my favorite flavors: Lemon Roasted Potatoes.

These potatoes are a favorite at my house. Serve with grilled chicken and a Greek salad for a perfect summer supper. 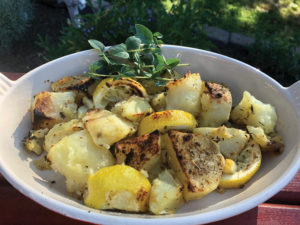 Place the potatoes in a single layer in a 13-by-9-inch baking dish and pour the oil over them. Combine the garlic, dried oregano, salt and pepper; add to dish; and toss well to coat with the oil.

Chop fresh oregano and combine with salt flakes. Sprinkle over the potatoes, garnish with oregano sprigs and serve at once.