Bears are perhaps the most majestic, awe-inspiring creatures in North America. They are a picturesque vision of nature’s grace and raw power rolled up into one cute and cuddly beast. Despite the fact that our children (and some adults) curl up with plush depictions of them every night, the actual beasts are soil-your-shorts scary when encountered on their turf. Beauty is best from a distance, am I right? 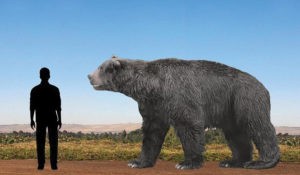 The arctotherium angustidens, about to slay a silly human. Courtesy Wikipedia.

Today’s bears are just a shadow of what they once were. A grizzly at full charge can send a trained hunter with a cutting edge .45-caliber rifle into a panic. Our ancestors likely faced down beasts three times their size or more with nothing but their wits, sharpened stones and sticks.

We didn’t reach the top of the food chain by playing nice.

The biggest, baddest bear ever to have lived was Arctotherium angustidens, a goliath that weighed as much as, if not over, 3,500 pounds of muscle and teeth. They are actually believed to be the largest mammalian land-walking carnivore to walk the Earth. These dudes roamed North America taking what they wanted from whomever they wanted for tens of thousands of years. We have evidence that they tangled with giant sabre-toothed cats and won. Perhaps the freakiest thing about this titan was that it lived at the same time as our ancestors, and may have even tangled with early human tribes. Ultimately, the Ice Age was Arctotherium’s undoing as faster, smarter prey were able to avoid huge predators that used all of their energy in one charge. Eventually, these evolved into the spectacled bear of South America, which weighs about as much as a professional wrestler.

Size wasn’t always the factor that made superbears terrifying. Sometimes it was what they could do with just one part of their body: their teeth. Agriotherium was a type of bear with a huge range around the world, claiming a home on each continent except for South America, Australia and Antarctica. It also had blunted teeth, which at first sight makes you think, “Aww, it eats berries and honey!”But when you look at the rest of the jaw and how the muscles anchor onto that jaw, you soon realize it has the greatest bite force of possibly any land mammal in the history of the world. There is only one thing that’s used for, and it’s not berries, my friend. These guys were able to bite with such force that they could sever a Megaloceros’ leg (giant deer) with the ease that we bite through a freakin’ taco.

Currently, the giant panda is the only bear relative in the world that exerts a bite force similar to Agriotherium. Lucky for us, the giant panda’s staple diet is bamboo and not human flesh, but you’re not going to catch me testing that theory.

A bear that has earned a place of legendary fear in the hearts of humankind is the cave bear, precisely because of its intersection with our ancestors’ existence and habitation before the agricultural revolution. While people were discovering farming the Nile, other people were seeking the shelter of caves in Europe. Unfortunately for those people, so was Ursus spelaeus, also known as the cave bear. Cave bears lived in caves year-round and were extremely territorial, though the same size as modern bears, these guys held defensible positions and were easily cornered. We all know what cornered bears do. Cave bears apparently fought with cave lions in prehistoric gang wars to claim caves for themselves, because pre-Ice Age Europe wasn’t a bad enough place to live already, our ancestors had to deal with giant bears and lions fighting over real estate.

Ol’ Ursus should’ve looked into escrow, because they ended up foreclosing, getting evicted by humans and evolving into European brown bears who now only vacation in caves during the winter. Timeshare bears. Timebears?

The oddball of the bunch was Arctodus spp, or the short-faced bear. This guy made his home in what is now California, and at a glance looks like any other bear. The difference is it has very long legs, and may have been an exceptional runner. It stood six-foot at the shoulder, tall enough to lick the honey from the hair of any maiden fair. Unfortunately for the maiden fair, the bear’s staple diet was meat, and slow humans would have made for a tasty treat. Despite its speed, Arctodus wasn’t very adept at turning. It was also really heavy, so unless its prey was Indiana Jones (seriously, dude, just move to the left or right!), it didn’t have a great chance at nabbing dinner. Considering it survived as a species for about 2.5 million years, prey must have been really slow or stupid by today’s standards for a very long time.

Unfortunately for Arctodus, as with his big cousins, the ice age culled many large predators and prey that required too much energy to keep warm, and smaller creatures swept in and took over. That worked in our favor, but that also doesn’t mean every climate catastrophe will. Bears are a vital part of our ecosystem. Without them, large bodies of protein just rot and decay and brood disease through the wilderness. This summer, thank a bear in the best way you possibly can: staying the heck away and not drawing attention to the fact that you’re a delicious bag of bear food.