BoCo Rodeo hosts range of additions at the arena in 2019

Bonner County Rodeo organizers are saddling up a number of new exhibitions, acts and events for the 2019 competition, set for Friday-Saturday, Aug. 2-3 at the Bonner County Fairgrounds. 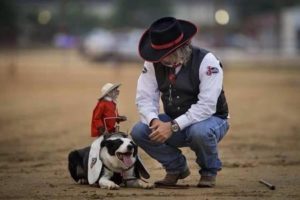 Sanctioned by the Professional Rodeo Cowboys Association and Women’s Professional Rodeo Association, this year’s rodeo features longtime favorites like calf roping, barrel racing and competitive bronc riding, with the addition of professional women’s breakaway roping — an exhibition of speed and accuracy described as similar to calf roping only a rider doesn’t dismount, their rope instead disengaging from the saddle once the calf is lassoed.

Also new this year is the Rascal Rodeo, which on Saturday, Aug. 3 at 10 a.m. gives children and adults with disabilities the chance to participate in a range of rodeo activities, from leading horses to riding bucking barrels and “milking” a bucket cow.

“It’s an event to give these individuals an opportunity to experience cowboy life,” said Rodeo President Jimmy Cornelius.

Other events include the Rustlin’ Up Grub food drive, which benefits the Bonner Community Food Bank — bring a can of non-perishable food to the ticket booth and be entered into a prize raffle — and the Miracle Minute, in which rodeo royalty and area kids collect contributes from rodeo attendees to support local cancer services.

“We’re making quite a few changes here in one year,” Cornelius said. “Trying to keep it fresh.”

But perhaps the most unique performer at this year’s event is also its smallest.

Whiplash the Cowboy Monkey, who hails from Stephenville, Texas, lives up to his stage name. The 27-year-old white-headed capuchin monkey, whose given name is Pistol Pete, is a veteran of rodeos around the country. Now he’s coming to the Bonner County Rodeo for a special performance in which he’ll ride his trusty dog in a display of sheep herding prowess.

Kenny Petet has owned, cared for, worked and lived with Whiplash for the past seven years, after taking him as a favor for the late-Tommy Lucia — a family friend and legendary rodeo animal trainer who will this year enter the Pro Rodeo Hall of Fame.

“Whip, he’s really smart. He’s been doing this since he was 2 and he’ll live to 45 or 50,” Petet told the Reader in a phone interview while driving through Montana, as Whiplash rode in the backseat watching TV and eating grapes. “He’s healthy, he’s happy, he likes what he does. He’s lived with people all his life.”

Dog-riding monkey acts have a long history, dating back to the days of vaudeville at the turn of the 20th century. They eventually fell out of favor — Petet said unscrupulous managers in former times would simply buy a capuchin at the pet store, tie it to a dog and set the pair loose in the arena.

Petet was clear that practices have changed. Whiplash is in no way restrained to his canine mount and “he rides that dog because he wants to,” Petet said. What’s more, the little capuchin lives at home with the Petets “like a toddler who never grows up.”

Cornelius said he was drawn to including Whiplash in this year’s rodeo because “that’s a specialty act that I saw when I was a kid, but nobody does it anymore.” Petet confirmed that Whiplash is one of only two cowboy monkeys currently performing in the country.

That was enough to catch the attention of Heidi Cornelius, Jimmy’s wife, who encountered Whiplash and Petet at the PRCA convention in Las Vegas last December.

“At the time I thought, ‘We have to do something completely different because we had some of the best of the best trick riders [at the 2018 rodeo].’ When I saw Whiplash the Cowboy Monkey, I thought, ‘Oh my gosh, we have got to get that act,’” she said.