I’ve just returned from an unexpected long weekend to Missoula, where I found little respite from the lingering, residual smoke of myriad fires. Sadly, we’ve had another season of fierce fires that are unforgiving to all living creatures: the wildlife (many with young offspring) and their food chain, shop owners and employees who depend on the perfect bliss-blue skies of tourism, and all the rest of us who choose to live our lives in the paradise of the west. Many have seen their dreams perish in great walls of flames, reducing their dwellings to nothing more than ash and twisted metal.

By now, many of you have probably seen the selfie-video of father and son tourists trying to escape the recent fire at Glacier National Park, but their route from Kelly’s Camp was cut off from a downed log (they were eventually rescued and escaped by boat via Lake McDonald). My friend Doug Miller was behind them and somehow made his way through the fiery passage, most likely because he knew the road so well.

By the time he made it to West Glacier, his hundred-year-old family cabin, along with the other original vacations cabins, had been reduced to ash and smoke. The fire came so quickly that he barely had time to grab much of anything, leaving behind most of his treasured possessions, including the few belongings of his late wife, Yvonne, who spent her last summer there before succumbing to leukemia in her 30s when their only child, Yvette, was barely two years old.

Yvette likes to say she came to one of Ryanne’s birthday parties and never went home. It’s kind of true — the girls were perfect childhood companions, a pair of ranch kids who preferred bottle feeding calves to chasing boys. They had a baking repertoire that included a fancy cake for any farmyard creatures they could capture. In the summer Doug would load up the girls (or sometimes all three of my kids) in his battered green Mustang, and they’d head up to the idyllic western shore of Lake McDonald to hike Howe Ridge, paddle an old canoe in Lake McDonald and catch frogs from the shores of fast-running streams. Ryanne still recalls waking on chilly mornings in their attic sleeping quarters to the aroma of Doug preparing breakfast: Dutch Babies sizzling in the oven in a sturdy old cast iron skillet. She thought those oversized, puffy pancakes were the most wonderful and exotic treat she’s ever tasted.

Thirty years later, Yvette and Ryanne, busy with their own families, still manage to make summer-time for one another. Barely two weeks ago, she joined us at our mountain retreat for a visit and took her turn in the kitchen, whipping up a batch of spicy guacamole for our final supper in the woods.  Afterwards, we hung out in the oversized-screened porch, nuzzling her sweet golden retriever, Lilly, and making Christmas gift plans for Lilly’s yet-to-be conceived littler of pups. In the morning, it was time to help load her rig, hug and kiss, and wave goodbye.

And just a couple days later, on the 35th anniversary of his wife Yvonne’s death, Doug died of a heart attack in Yvette’s home. Ryanne was there within hours to comfort her and her young children and to begin organizing the compulsory duties that come with death. Next it was my turn to go and provide love and nourishment (which was to include pancakes of every shape and size for Ben, and Ryanne’s namesake, Annie).

Yvette and I sorted through lots of piles of old photos and family memorabilia connected to either her mom or dad. And we spent lots of time recalling many memorable moments we shared in my various kitchens, where, it seemed, she always had a hand in stirring whatever was heading for the oven or simmering on the stovetop. Looking back, we agreed that, mostly, she loved the notion of helping a mother in the kitchen.

As Ryanne wrote Doug’s obituary, she was reminded that this young widower, the quintessentially tall, handsome and rugged Montana cattleman, also spent quite a bit of time in the kitchen. I hope I can craft light and fluffy Dutch Babies for his grandkids that are worthy of his memory. I’m sure going to try! 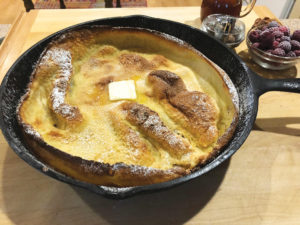 Rumor has it that the Dutch Baby was introduced at Manca’s Cafe, a family-run restaurant in Seattle, Wash., in the ’40s (still a popular breakfast treat in Seattle).  It is generally served with fresh squeezed lemon, butter, and powdered sugar, fruit toppings or syrup.

A Dutch Baby is baked in a cast iron frying pan and will fall soon after being removed from the oven.

Add all the ingredients to a blender, mix it up, let it rest for half an hour, then pour it into a hot skillet sizzling with butter, and pop it into the oven.

Preheat oven to 425 degrees (adjust racks if needed, make sure there is room for it to puff).

Combine eggs, flour, milk, sugar and nutmeg in a blender, and blend until smooth. Let rest for half an hour.

Place butter in heavy 10-inch skillet cast iron skillet and place in the oven. As soon as the butter has melted (watch so it does not burn), swirl to coat pan, add the batter to the pan, swirl to coat pan,  return pan to the oven and bake for 18 minutes (or so), until the pancake is puffed and golden. Lower oven temperature to 300 degrees and bake five minutes longer.

Remove pancake from oven, cut into wedges and serve at once topped with squeeze of lemon, syrup, preserves, confectioners’ sugar. Add a side of bacon for good measure!