Oh, fall, how I adore your beautiful and bountiful season. It’s a year of abundant harvest, and I must say, I have seen many cups and gardens that “runneth over.” I have longtime friends with a creative sign business, and I’ve been considering one of their “no solicitors-no preachers” signs for my front porch. And I think, for the season of fall, I may need to consider a polite addendum at the bottom: “No zucchini, but thanks. I’ll pass on the plums and pears. I appreciate your generosity, but no, really. No apples or tomatoes this year.”

My friends are nothing if not generous, and there was a time when I took in every orphaned onion in Sandpoint. But I’m learning to cut back on my gleaning, canning and freezing. After all, there’s only so much one woman and a three-legged cat can consume.

I have no plans to retire from the kitchen, though I am prepping myself to take on more of an advisory role to all the capable and competent young people in my life. Just this week, down in Moscow, my 12-year-old grandson, Alden, whipped out a couple of picture-perfect apple pies from his backyard harvest. In addition to his standout pies, Alden’s family hosts an annual Apple Day and, last Sunday, using the sturdy press from his mother’s youth, they pressed more than 20 gallons of cider to share with friends and neighbors, who also sampled warm apple cobbler.

Still young to me (at my age, it’s relative) is Heidi Dinning (née Gunter), an expat living north of us in Bonners Ferry, though she still treks home to Sandpoint at least once a week to deliver her loaves of fresh, homemade sourdough bread. When my daughter Ryanne (a best school pal with Heidi) was here in July, I bought two loaves that Heidi delivered right to my door.

She mentioned that she was nervous bringing bread to me and hoped I would like it. Honestly? I certainly never turned out a loaf that delicious in my life. It was a perfect combination of tangy, chewy and crispy, with a textbook crumb. I wasn’t the least bit surprised. I remember teenage Heidi (part artist and part baker) in my kitchen, making finely detailed chocolate garnishes for my Christmas bûche de noël.

You can find her on Facebook at “Heidi’s Bread” to place your order.  Buy an extra loaf for the freezer or you’ll live to regret it after your first bite. I like mine lightly toasted and topped with avocado, a little olive oil and a smidge of sea salt (traditionalist Ryanne prefers a spread of Irish butter).

Another favorite young woman I’ve had the opportunity to collaborate with in a kitchen is my hardworking friend, Chef Judy Colegrove, of Tango Cafe, who turns out some of the best food in Sandpoint. Judy and I have shared kitchen space more than once and I’ve left feeling more like the student than the mentor. I’m not the only one who thinks she’s pretty darn competent in the kitchen: Tango once again won the Golden Ladle for this year’s Souptember with their Seafood Whiskey Bisque (which had my vote). I love her creative, culinary boldness and the fact that she can even make tofu taste good.

Food collaboration is a great connector, and whether we take the role of student or teacher, we can all offer something to the experience of this rich, ancient tradition. Take the French, and their famous dish, cassoulet. Legend says that amid the siege of Castelnaudary by the Black Prince of Wales in 1355, the townspeople gathered with all the bits of food from their homes and made a huge, stew-type dish in a massive cauldron, fortifying the residents for a victorious battle.

I recently hosted a more modern food collaboration at my home. I called it “A-Z Charcuterie” and asked each guest to bring one item for the charcuterie board that began with the same letter as their last name. It was fun to see the creative culinary minds arrive, laden with meats, cheeses and myriad accoutrements, working together (aided with wine). My kitchen was filled with animated conversation and laughter as we constructed and then shared our tasty creation. It’s also a sure way to get those who “don’t cook” involved in a collaboration. Who can turn down the offer of a fun evening for the cost of a hunk of cheese?

Even youngsters can host fun collaborations. Who doesn’t remember a version of “Stone Soup”? It’s an old European fable in which weary and famished travelers hope to find a meal, but no one will offer them even a speck of food. Finally, they place a fire under their own cauldron, filled with nothing but water and a rock. Little by little, the villagers begin to add bits and pieces of ingredients, eventually making a delicious pot of soup for all to eat.

Every country has its own version of the tale, but the lesson we take away is the notion to share all that is ours. Any favorite soup recipe will do (though I substitute small red potatoes for stones).

I hope you’ll be inspired to come up with a kitchen collaboration of your own. Pair it with this rustic pear tart. I’m glad I didn’t turn away this delicious harvest gift.

Rustic Pear Tart Recipe • This simple dessert is lovely alone but pairs up nicely with a scoop of vanilla ice cream. I often divide it up and let the “littles” each make their own. You can make four small tarts with this recipe. 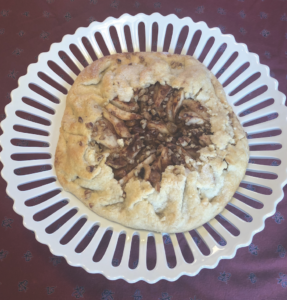 On a lightly floured sheet of parchment paper, roll out pastry into a 14-in. circle. Lift and transfer to a nearby baking sheet and set aside.

In a large bowl, combine the pears with lemon juice and toss lightly. Add the golden raisins and vanilla. Combine ¼ cup sugar, cornstarch, cinnamon and nutmeg, sprinkle over pear mixture and using hands, toss lightly again to combine. Arrange over pastry to within 2 in. of edges; sprinkle with chopped pecans. Fold edges of pastry over filling, leaving center uncovered.

Whisk egg white and water, then brush over folded pastry. Sprinkle with remaining sugar. Bake at 375° for 35-40 minutes or until crust is golden and filling is bubbly.