The Sandpoint Eater: Once upon a time

Those who know me well would tell you that I am rarely a woman at a loss for words. Not true this week. I tried to work on this column all weekend, and Monday morning found me sitting right here, staring at a blank Word document. If only words would flow like tears.

I lost my little best buddy last weekend. It’s been years since I’ve suffered pet grief. And, wow, I’d kind of forgotten about this knife-to-the-heart and punch-to-the-gut experience. It’s not for the faint of heart!

While conversing with a friend about my writer’s block, she offered me this sage advice, “share your grief and you’ll feel better.” She also reminded me that many of you already know my three-legged, insulin-dependent kitty, Laurel (either in person or through my various columns). For all I know, he could’ve had his own following.

You may have read about him many years ago after I hosted a Reader holiday gathering in my home. As usual, Laurel took up his central perch in the kitchen to watch the comings and goings of the night. He caught Ben Olson’s attention, and Ben snapped a few photos of him. A couple of weeks later, Ben sent me an image that became one of my favorite Laurel photos. Soon after that, Ben even featured Laurel in his own Reader spread.

Once I figured out I’d let y’all know about Laurel, I was struck with yet another dilemma. How could I manage in my grief to rise up, teary-eyed from my bed, and come up with a recipe? And a photo?

My quandary took me right back to my ranch days, and I can hear my mother-in-law’s matter-of-fact voice declaring that neither grief nor sadness were valid excuses. Dessert was expected on the table after every meal. Suddenly I remembered this favorite foolproof raspberry cake — it got me out of more than one jam when I needed a sweet and easy offering. 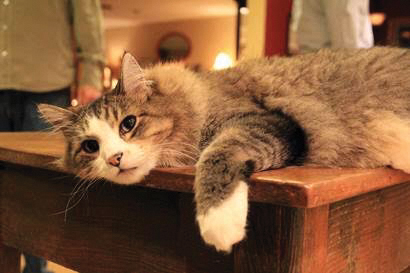 Under the shade of my raspberry bushes was a favorite hangout of Laurel’s. And his timing was perfect because, right now, the bushes are laden with huge, ripe berries. No doubt he would have given my efforts a paw of approval. He was like that. Here’s his story:

Once upon a time, on the railroad tracks in Laurel, Mont., an eensy-teensy orphaned kitty was discovered under the galley of the dining car by a train crew. One of them coaxed him out, scooped him up and placed him into the warm, waiting palm of his new human momma, who was overseeing a passenger train project.

In the daytime, she stowed him away in her office/compartment onboard the train. She tucked him into her bosom for dinner meetings and snuck him into the crew hotels at night. His first litterbox was the sand in the tall ashtrays outside the hotel entrances. Fed milk from a tiny bottle, he weathered a host of stomach ailments, as his tiny body adjusted to milk and motion sickness.

It was a long four days, stowed aboard the train, until he arrived in Sandpoint — mostly unscathed — and was christened Laurel. So began his fairytale life.

For 15 years, he gave unconditional love to his keeper, always grateful for his rescue. In fact, no one loved momma more than Laurel. Soon there were grandbabes, whom he showered with love. If there was a baby on the floor, Laurel was omnipresent. He stretched out alongside them, ever-so-softly patting their baby faces with his fluffy white paw.

On his very own table, in the center of her kitchen, Laurel kept a keen eye on his mom’s culinary projects. He’d spend hours, content just to be near her.  He was even known to photobomb the odd Zoom cooking class.

He loved the outdoors, where he sipped cool water from the neighbor’s pond and dozed in the early morning sun. A favorite pastime was catching and delivering myriad trophy rodents, to friends (including dog friends) and family alike.

But his very favorite spot was the oversized and worn leather chair he shared with his momma, cradled alongside her during morning coffee and evening cocktails. They spent oodles of time there, especially during COVID. Laurel either loved or hated FaceTime and appeared jealously for every call, positioning himself between the phone and his master.

Laurel had many health challenges and was nurtured by extraordinary caregivers when his momma traveled. But this past year, she was mostly at his side and watched his decline with great sadness. Yet, she loved him unselfishly and, with a shattered heart, chose to free him from further suffering.

Laurel was spoiled beyond measure and frequently dined on fresh ahi and U-12 shrimp. But, for his last supper, they shared a feast of steamed lobster and king crab, and he relished every last bite.

Oh, how she misses his unwavering devotion and sweet, soft cuddles, but his momma takes much comfort knowing he’s in kitty heaven, pouncing mice with four good feet and living happily ever after. 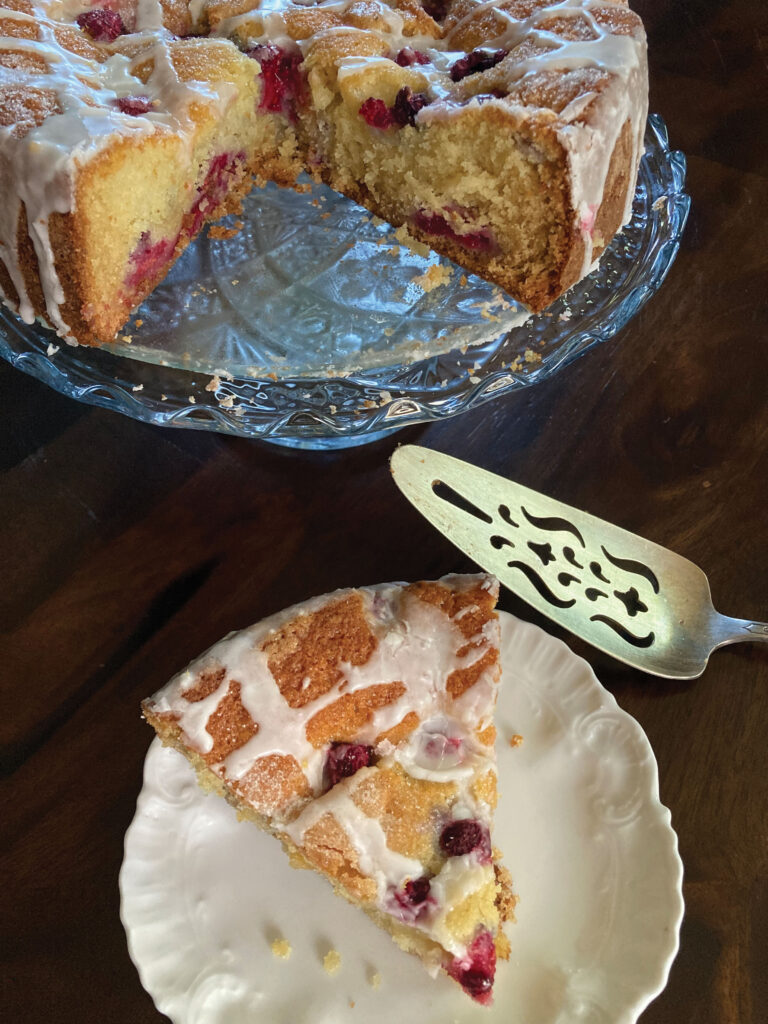 This cake is so easy and versatile. You can substitute raspberries with huckleberries or really ripe peach chunks. Use fresh fruit, gently washed and patted dried — or frozen. If frozen, add at the last minute while the berries are still frozen. The buttermilk adds just the right amount of tanginess. Serve it warm with fresh cream or try it glazed with lemon juice and powdered sugar. You can top it with streusel before baking. Top it with ice cream or even a drizzle of warm chocolate ganache after it’s cooled.

• Zest of one lemon (reserve juice if making glaze).

Preheat the oven to 375 degrees Fahrenheit. Grease a 9-inch cake pan and line with parchment paper. Flip paper so both sides are greased. Dust lightly with flour.

In a stand-up mixer, cream the butter and 1 cup sugar until light and fluffy, about 2 minutes. Add the eggs, one at a time, and beat 3-4 minutes for each egg. Scrape bowl well and mix another minute or so.

On lowest speed, add the flour in 3 batches, alternating with the buttermilk. Mix until just combined.

Transfer the batter to the cake pan, smoothing into an even layer. Tap pan to even dough. Place the raspberries on top, sprinkle with the remaining sugar and use a fine grater to top with zest of one lemon.

Bake the cake for 35-40 minutes until golden brown and a toothpick inserted into the center of the cake comes out clean. Cool the cake in the pan for 10 minutes before removing and cooling on a wire rack. Serve warm or at room temperature.