Released for streaming July 2 on Amazon Prime, The Tomorrow War imagines what would happen if an alien invasion well-nigh depopulated the planet of humans between 2048 and 2051 and, running low on cannon fodder, those post-date military leaders found a way to jump back to 2022 and draft the people of the past into fighting the war for the future.

On a conceptual level that’s kinda cool. It could play with ideas of generational war (both literal and figurative) and the contingent nature of time. It could also delve into the socio-political dislocation that would result from everyone knowing that hitherto unimaginable horrors will be visited on them in about 30 years.

I’d watch that movie. Sadly, despite having all those elements to varying superficial degrees, The Tomorrow War is not that movie.

Rather than lean into its high-concept sci-fi setup, The Tomorrow War is more or less a $200 million vehicle for Chris Pratt’s agent to bludgeon us with the idea that his client is an action star. Despite the interminabile insistence of the Marvel Cinematic Universe, Pratt is and always will be at his best as lovable doofus Andy Dwyer in Parks and Rec. 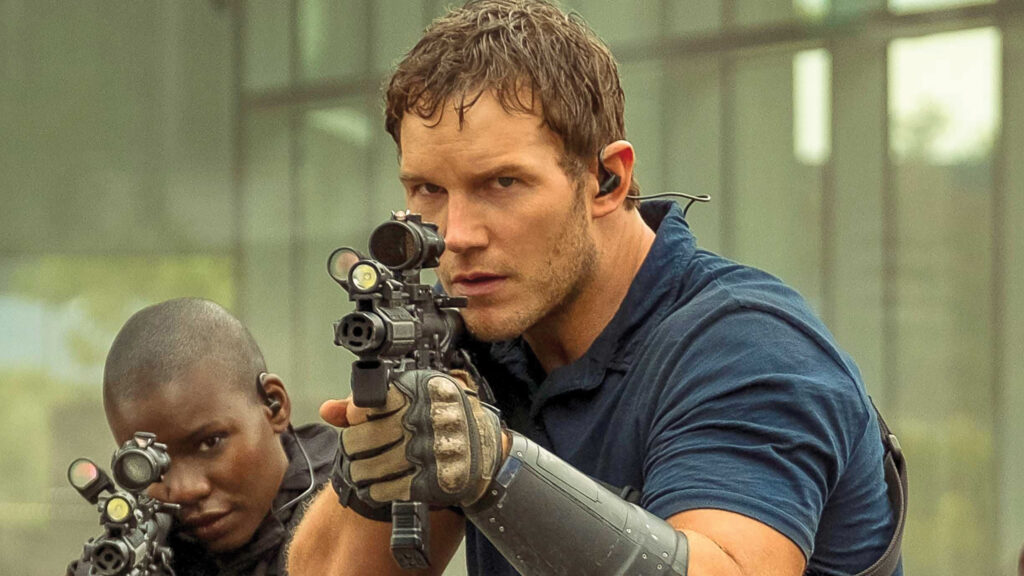 The film opens with Pratt as a deflated dad who, despite his service as a Green Beret in Iraq, finds himself slouching toward middle age as an uninspired high-school science teacher. His crisis of self worth ticks up a notch when he’s passed over for a job at a fancy research lab, so he slumps onto the couch to drink a Coors stubby and watch the World Cup with a bunch of his happy suburban pals.

Suddenly, as the world watches, a squiggly wormhole-y anomaly appears on the field and out of it rushes a squad of futuristic soldiers who announce that aliens have taken over the planet in 2051 and it’s up to folks in 2022 to travel forward in time to fight them. What follows is a global military draft, with civilians called up to be surgically fitted with high-tech gauntlets that will enable them to “jump” for seven-day tours of duty in the titular “tomorrow war.”

Of course, our hero gets his shot at making his life meaningful (as if being a teacher isn’t?), and by that we mean he gets to be a Green Beret again, shooting stuff, running and jumping off of stuff, using cool combat jargon and offering inspirational tough-guy-with-a-heart-of-gold monologues. He also does some science.

There’s also our hero’s dad in the “present” — a cartoonishly paranoid but stereotypically badass Vietnam vet — and (spoiler) his grown-up daughter in 2051, who thinks of him as a similar deadbeat, though whatever he did happened sometime in the “future” and he doesn’t know what it was. Also, who cares.

There’s another tough guy with nothing to lose but his nihilism (which he does), a nebbish scientist who apparently got his Ph.D. in comic relief and, absurdly, a high-school kid whose volcano obsession is critical to figuring out where the aliens actually came from.

Another spoiler: The aliens have been on Earth for a very long time, frozen on a spaceship that crashed near the North Pole en route to another planet where they were to be unleashed by another alien species as some sort of bioweapon. (Prometheus, anyone?)

A huge volcanic eruption in the 10th century CE (enter: high-school nerd) and more recent climate change thawed them out, thus we have met the enemy and they are us. Sort of. The climate change thing seems thrown in as the merest nod toward relevance.

You can imagine the rest: explosions, alien guts, family reconciliation, brave sacrifices and all the other soggy tropes that when shoveled into a multimillion dollar pile amount to a blockbuster franchise (word is there’s already a sequel in development).

All I can say is that if I had a “jumplink” back to July 2, I’d use it to tell myself to save those 138 minutes for anything else. I don’t, so I’m jumping forward from July 12 in the hopes that I’m not too late to save you.