The Strong Creek Bridge in Hope will remain inaccessible to cars over the upcoming holiday, as crews work to completely replace the nearly century-old structure. 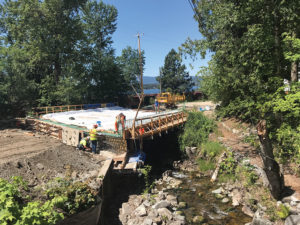 Original estimates of a completion date for the project set aim at the Fourth of July. Idaho Transportation Department spokesperson Megan Sausser said crews just finished pouring the concrete bridge deck Tuesday, and that it will take a minimum of 10 days to cure. She said she doesn’t anticipate the bridge being open to vehicular traffic for another two or three weeks.

“We are aiming to get one lane open as soon as possible before opening to two lanes,” she said, though noted only the walking bridge will be open over the Fourth of July holiday.

The Strong Creek Bridge, built in 1924 and last seriously improved in 1974, is located on the Idaho Highway 200 business route through Hope near the post office. Once completed, the new structure will feature a concrete sidewalk — rather than the original wood one — and accessible ramps.

The project was slated to begin in February, but was postponed to March due to heavy snow.

For more information and updates on the project, visit www.itdprojects.org.