The Sandpoint Eater: Mangia on my mind

Lately, for a lot of reasons, I’ve had Italy on my mind. I recently helped a close friend plan a trip through Italy to follow her daughter’s long-planned dream wedding in a Tuscan villa.

The month before, I was in Boston for a wedding and, due to my travel companions’ flight delays, I had the better part of a day all to myself. It didn’t take long to drop my bags at the hotel and head straight to the capital of Italian food shopping: Eataly.

About 20 years ago, the idea for Eataly came to an Italian named Oscar Farinetti. His idea was to celebrate Italy by creating a space to gather, eat, shop and learn. Now you can find these stores all over the world and, when I am near one, I prioritize a day of eating and shopping there.

It was within easy walking distance to my hotel at Copley Square, though my purchases required an Uber to return to the Marriott. If only I’d had refrigeration. But, given current flight delays and lost luggage situations, I couldn’t risk a bag filled with perishable Parmesan, pasta and prosciutto. Regardless, the temptation was palatable.

My whirlwind of all things Italian continued. Last week, after three false starts, I saw my favorite Italian singer and one-time idol, Frankie Valli, performing at the Smith Center in Las Vegas, where he was accompanied by his newer (and much younger) Four Season’s backup singers. His age (88!) is obviously catching up, and he’s slowing down, but it was a great evening of entertainment, and I’m still humming “Sherry Baby.”

As a kid, I swooned over Frankie’s falsetto voice and his handsome pictures in my sister’s copies of Photoplay Magazine. Years later, through travel industry connections, I saw the preview of Jersey Boys before it opened on Broadway (and have since seen it on Broadway at least a half dozen times).

When Jersey Boys reached a pinnacle in performances, Valli announced he was developing a line of spaghetti sauce. I waited patiently; but, beyond the announcement, it didn’t even become a flash in the saucepan. Most Italians love to cook, and Frankie was no exception, so it wasn’t uncommon to see pictures of him stirring up more than trouble in the kitchen.

I love the largeness of food-centric Italian traditions, the old movies and photos that show huge gatherings in tiny kitchens where colossal platters of pasta and decanted red wine filled the table, and laughter and chatter filled the room.

Stanley Tucci now fills the room on our widescreen televisions, sharing his journeys to Italy, visiting little known locations and some of the best-kept secrets in Italian cuisine. It seems we are all having a love affair with Italy. In fact, one of the most frequent requests I get in the travel business is to secure cooking classes in Tuscany, where you can learn to cook with a five-star chef or in an Italian mama’s primitive kitchen.

I’ve never cooked in Tuscany, but I have shopped for ingredients in Parma and learned to make saltimbocca, a veal dish wrapped with prosciutto and sage, marinated and sautéed. The instructor also shared some sage advice and technique for perfect ravioli pasta, “When your pasta dough is ready,” she explained, “it should feel just like a newborn baby’s butt.” And it does (I have expertly patted more than my share, so I speak confidently).

I’m anxious to gather — OK, purchase — the best of fall’s harvest for some serious Italian cooking. I love prepping all the garlic, tomatoes, peppers and onions for making pasta sauce; and, to be sure, I’ll download Tony Bennett’s playlist.

For now, though, with this heat, I am settling for a cold Italian pasta salad. I’m heading to our annual summer retreat in Montana, so I’ll triple the recipe — because half of those newborn baby butts have grown into ravenous teenagers with minds full of mangia.

Italian pasta salad recipe •  A colorful and tasty salad for buffets and picnics. For vegetarians, the meat can be served on the side or add to a separate bowl of salad. Serves about 12. 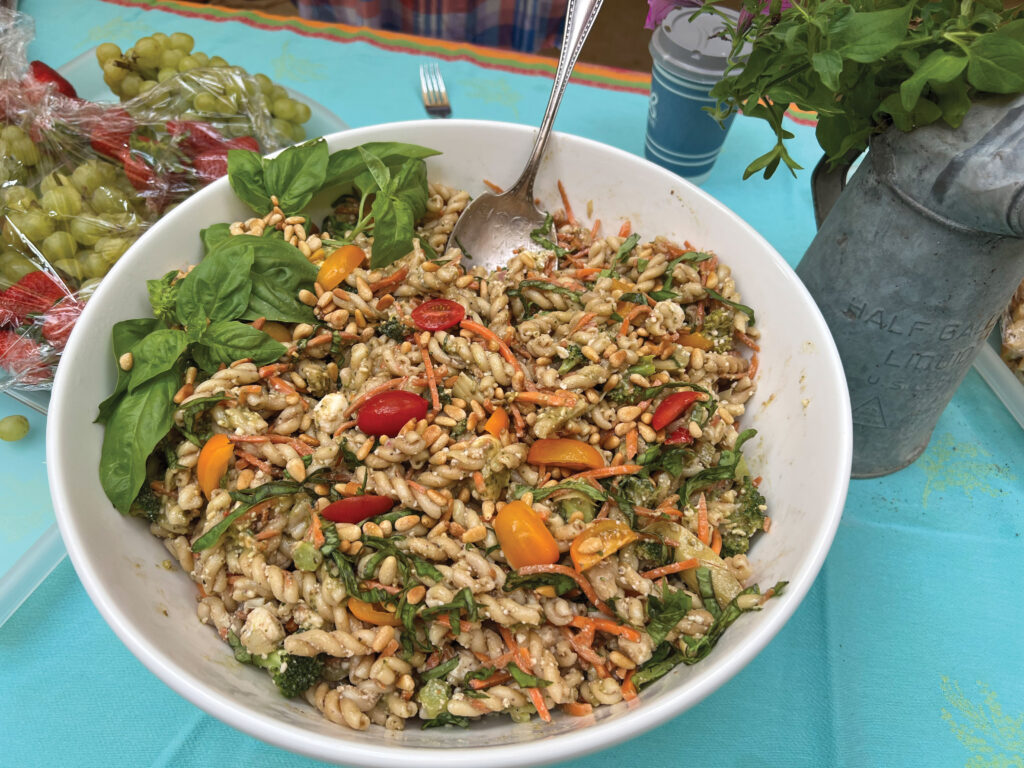 Cook the pasta in a large pot of salted boiling water until al dente. Drain, and rinse with cold water.

In a large bowl, add all chopped ingredients (except meat). Stir in the pasta and toss well.