Music for the highs and lows

An interview with Matt Quinn of Mt. Joy

Mt. Joy’s speedy trajectory from its 2016 formation to current-day indie rock notoriety is indicative of how quickly the band’s music has resonated with audiences across genres. With poignant lyrics and folk-meets-jazzy-jam-band instrumentation, the five-piece L.A.-based outfit has amassed hundreds of millions of online streams on tracks like “Silver Lining” and “Strangers.” 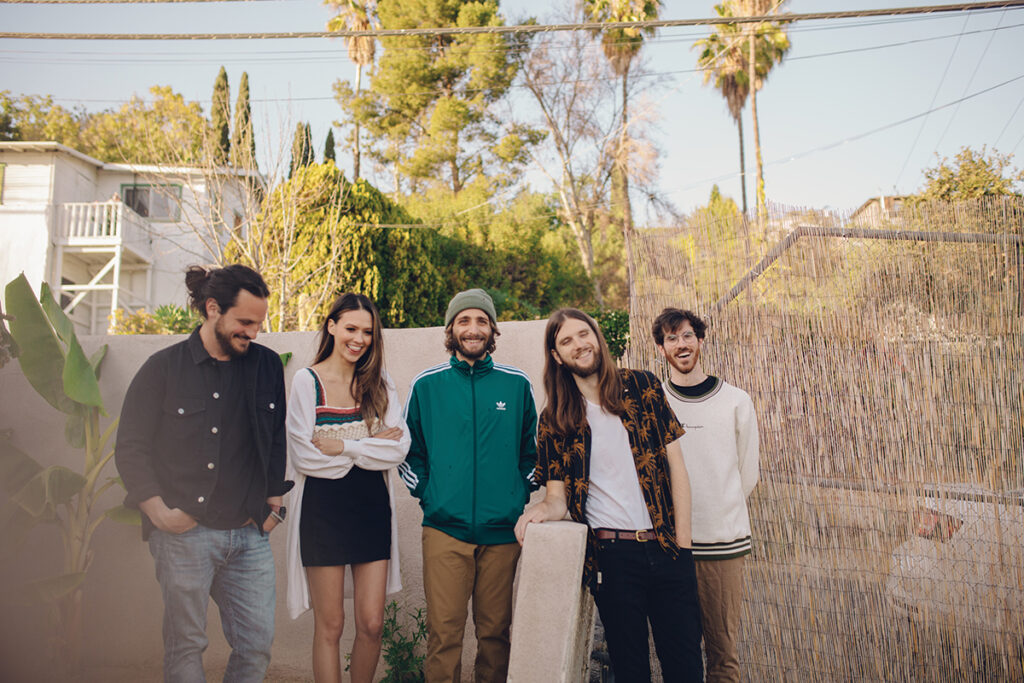 Mt. Joy’s Matt Quinn, second from right, spoke with the Reader before their July 30 concert at the Festival at Sandpoint. Photo by Muriel Margaret.

The Reader interviewed frontman Matt Quinn about the band’s fast rise, the highs and lows of being a traveling artist, and Mt. Joy’s refreshingly creative Orange Blood era.

Sandpoint Reader: You guys are playing the Festival at Sandpoint as part of this summer’s Orange Blood Tour. What is it like getting to share this new work after two pretty unpredictable years?

Matt Quinn: It’s truly been the best shows we’ve ever played. The new album just allows a depth and diversity of setlist-making and has really transformed our live show. We’re jamming more, connecting songs more. It’s really just opened up a new lane of creativity for us.

SPR: In trying to define what genre Mt. Joy belongs to, it’s easy to just say “indie” and let people listen and decide for themselves what, exactly, that means. As the creators of your unique sound, what would you say is the secret recipe that makes Mt. Joy more than a run-of-the-mill indie band?

MQ: I just think the depth in every aspect of what we do is what makes us different. We just have a special group of players that have spent time playing and growing together, and our songs are honest and have more depth and meaning than they advertise. We sort of loathe the comparisons to folk bands that we don’t really think sound anything like us, but such is life. Come see us, especially on this tour, and go from there.

SPR: Each of your albums feels like a new era for Mt. Joy. How would you describe the Orange Blood era?

MQ: This is the band really coming into its own and having fun with experimenting and pushing ourselves to make something unique.

SPR: Since I started listening to you guys in 2018, I remain struck by your ability to create music based so firmly around moments. From “Cardinal” to “Bathroom Light,” so many of your songs seem to be about seizing the moment. Is this a fair interpretation? Is this a theme you’ve found yourself leaning into over the years?

MQ: Yeah, I think that’s fair. So much of our story outside of the songs has been about seizing opportunity. We got thrown into the fire early on and haven’t looked back. There have been incredible highs and some scary lows but I really wouldn’t trade it for anything.

SPR: What’s the best part about being a touring musician? What’s the hardest part?

MQ: I think the best part is getting to see so much of this beautiful country. I mean what a great example this is: a Philly boy up in northern Idaho playing music with his best friends — that’s the dream. The hardest part is not being able to share so much of that dream with your loved ones. There’s a darkness to the travel and the time spent alone. It’s a balance for sure, and you find ways to make it work.

SPR: Mt. Joy has been on the fast track to becoming the act you are today, building momentum at what feels like warp speed over the past five years. Did you ever imagine you’d live the life you do today? With that momentum in mind, what’s next?

MQ: I guess it was always a dream, you know? Close your eyes while you’re playing guitar as a kid and envision a crowd singing along. I just kept writing and somehow it all came true. But the truth is, as a band, we’ve worked our butts off to get to this point. And on the way up you could tell if we put the work in we would get where we wanted to go; so, for us, it’s really just continuing to push ourselves beyond the place we are at musically. We believe we can be one of the greatest bands to ever do it. So, we just keep pushing this live show and each other, and see where it takes us.

Catch Mt. Joy, as well as openers The Moss, at the Festival at Sandpoint on Saturday, July 30. The box office opens at 5 p.m., general admission and season pass holders enter the gates at 6 p.m. and music starts at 7:30 p.m.