The Sandpoint Eater: How they roll

Transportable food has been around since the days of the Romans, and I guess it’s no surprise that I have a penchant for mobile eateries. Somewhere in my box of tattered old black-and-white ancestral photos is the picture of a relative, a hopeful young man (provenance undetermined), pushing a popcorn cart westward to seek his fortune.

I remember my first “meals on wheels” experience, at the Montana State Fair in Great Falls, like yesterday. It was nearly a 100-mile drive from Helena, and I was lucky enough to accompany my older sister and her boyfriend on their much-anticipated trip. My mother believed I was the ideal tag-along chaperone; most likely, it was a requirement for the young lovers’ escape to the country fair.

Once we arrived and established a meeting spot, they couldn’t wait to ditch me at the midway, giving me an extra couple of silver dollars to make myself scarce. I’d take a peek at the alluring sideshow posters, resisting the hawkers and shoving my coins deeper into my pockets before heading straight to the concession trucks.

The choices were endless — corn on the cob, greasy hamburgers, Snow King cones and sugared peanuts. Unfortunately, my appetite was invariably bigger than my budget and, even with the extra dough, I ran out of money before I got to the heavenly-scented elephant ears.

In the early ’70s, I spent a (long) summer in L.A. as a nanny for a clothing designer/manufacturer. As a reward for my service (or because my clothes weren’t up to par), his wife took me to their sample showroom in the garment district, where she selected a few modest wrap-around dresses for me. Then we had a quick lunch at her favorite Jewish deli before heading back to Beverly Hills.

Between the Bronson Clothing factory and the restaurant, we passed by several loncheras (stationary food trucks of Los Angeles that primarily served the garment factory workers). I would have gladly traded all the pastrami in the world for one of their aromatic plates of steaming Mexican food.

I’m not sure why I’m so drawn to food trucks; but, once, in the early 2000s, after a year’s paid pause in my career, I decided that, for my next venture, I’d open a food truck in Sandpoint (it was about the same time I wanted to convert my crawl space into a cheese cave).

Thank goodness for my intelligent children.

When one of them prefaced their response with, “Mom, that’s not a good idea,” I listened, though it took some time to concede with grace. Unfortunately, my vision of a cute corner setup, offering daily breakfast and lunch specials, was dampened by caveat conversations of frozen and busted pipes, clogged drains and grease traps, and 14-hour work days.

Instead of being the vendor, I make a darn good customer and seek out food truck cuisine wherever I go. As near as our local Oak Street Food Court (Korean noodles) and as far as Christmas markets in France (raclette) and the piers of Papeete, Tahiti, I have favorite foods and vendors throughout my universe.

The concept of food trucks may have originated in Tahiti, and I think they have some of the best les roulottes (food truck) fare in the world. Back in the 1930s, the Chinese pushed bamboo carts laden with tropical fruits and vegetables that they hawked to the locals. Soon they started adding staples to the carts. Eventually, they became stationary on small parcels of land, first offering baked goods and finally whole meals enjoyed by families and tourists alike.

Today the food courts, located near the wharf in Papeete, are still lively with locals, offering great varieties of food like grilled or fried fish and meat, loads of fries, crepes, and my favorite, poisson cru — in which tuna that was likely still swimming in a secluded lagoon that morning, and rich coconut milk still encased in its shell only hours before, is prepared to order. French/Polynesian/Chinese fusion strongly influences most of the offerings you’ll sample. You can even order Chinese noodles on a crusty baguette. While the islands of Tahiti are mostly known for fancy resorts and over-water bungalows serving over-the-top-expensive food, most les roulottes offer huge portions at reasonable prices.

Since my short-lived nanny days, I’ve been back to Los Angeles myriad times, sampling taco truck fare in the familiar garment district and the mobile pop-ups in more discerning neighborhoods like Brentwood. I’m headed to L.A. this week as a guest of Tahiti Tourisme. I’ll spend a couple of days learning about what’s new in Tahiti, and then I’m headed downtown for a day.

No offense to Brentwood, but you’ll find me wandering in the garment district. As luck would have it, I have business there (selecting Christmas linens for a client’s vacation home). They might dream of a white Christmas in Big Sky, but I have visions of chicken taquitos (bedded in a go-cup of fresh guacamole, topped with a wedge of lime) on my palate. Who doesn’t love guacamole — on everything? Especially this time of year when you can pick up most of the fresh ingredients at our Saturday Market.

Really good guacamole recipe • Save your salsa and mayo for something else! Use the freshest ingredients for the best guacamole and offer extra lime wedges and sea salt on the side. Serves 4-6 as an appetizer. 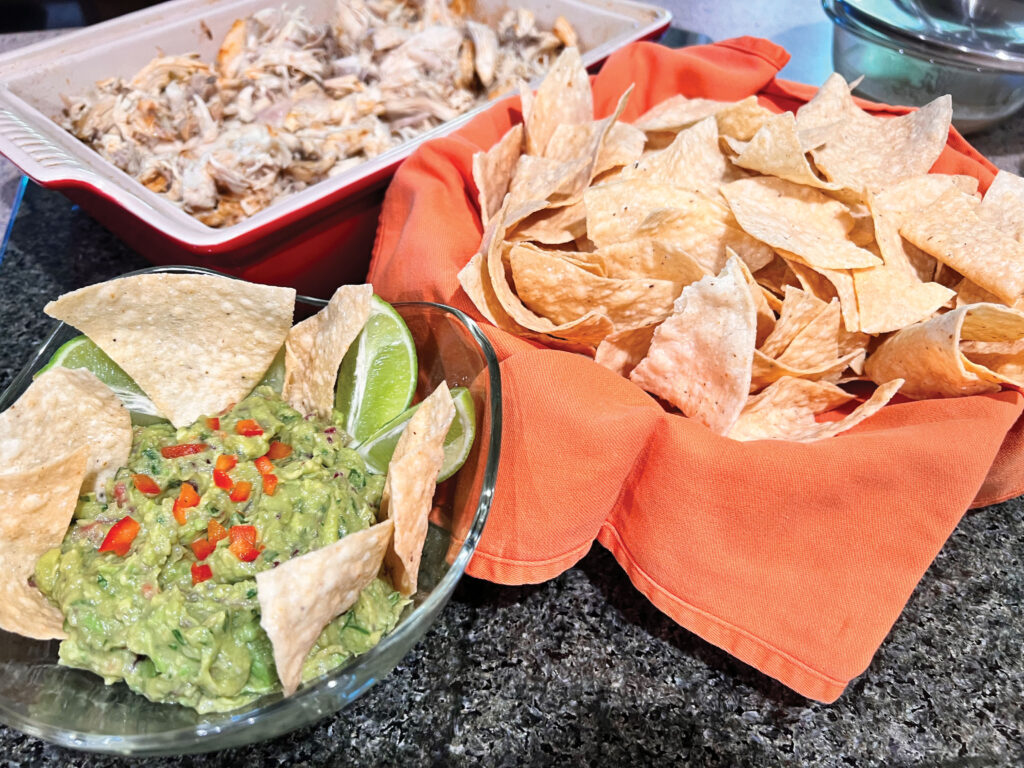 Slice the avocados in half, remove the pit and scoop into a mixing bowl.

Mash the avocado with a fork and make it as chunky or smooth as you’d like.

Add the remaining ingredients and stir together. Give it a taste test and add a pinch more salt or lime juice if needed.

Serve the guacamole with tortilla chips — or eat by the spoonful!