Last month was a whirlwind of culinary experiences for me. Armed with an over-the-top invitation to the Montana Master Chef program, I drove to Montana  to spend a few days in Greenough immersed in luxury at The Resort at Paws Up, a 37,000 acres luxury ranch about a half hour’s drive northeast of Missoula. In between hiking through the old ghost town of Garnet, rafting and fly-fishing on the low and lazy Blackfoot River, we were there to appreciate five course dinners, each course carefully paired with fantastic Washington and California wines. The menus were a collaboration of featured chefs who were all award-winning Chicago restaurateurs and noted cookbook authors. It was culinary nirvana par none.

On three evenings, over the course of three hours, we dined on delicacies such as Colorado lamb loin and sweet breads, squab roasted over thyme branches and smoked char roe. Each night’s finale was a sublime dessert followed by a cozy, starry night concert in a luxury “glamping” tent. The Montana Master Chef program is an annual event that also includes a Cook-Off Challenge, not unlike the ones you’ve seen on television. After the judges completed their tasks, the plates were auctioned off, with proceeds benefiting the Missoula Food Bank. I was lucky enough to be seated next to one of the high bidding folks, from Bookwalter Winery, who generously shared their winning (and expensive) morsels with me.

Just a couple of weeks later, I was slurping succulent oysters from heaping icy platters at Elliot’s Oyster House in Seattle and the next day, nibbling savory sandwiches and sipping High Tea at the Empress Hotel in Victoria. My children have long accused me of planning vacations around restaurants and markets, and before heading home (guilty as charged), I made a final stop on my culinary adventure to Pike Place Market, where I stocked up on duck confit, French macaroons and Pierre Robert, the most decadent triple crème cheese ever.  My cooler was filled to the brim with delicious ingredients while my mind and palate were perfecting a fabulous fall recipe for this very column.

I came home, unloaded the cooler and caught up on local happenings. And the next minute I was knocked to my knees by sadness. Seems lately, our little community has been rocked by illnesses of hometown favorites and even the death of a local leader. And in this grief, I can’t care about fermenting kohlrabi for an appetizer, nor browning butter for a lemon verbena tart.  I worry about my neighbors and our community, hit hard and vulnerable to life-changing trials.

My mind and heart are hurting, and I need the visceral comfort I can only find with the steady chopping, stirring and simmering that becomes soup. For starters, I drove up to Wood’s Meats to purchase my favorite sausage. It’s true I can buy it in town, but navigating my heartache on the drive north is part of the therapy. On this familiar road, with the changing trees of autumn, I consider what draws me to soup making in my time of need. I just know it’s good for what ails us, whether we are the maker or the recipient. I know, because I have been on both ends of the soup chain and have appreciated the warm gesture of hot nourishment more than once in my life.

And it seems people have been simmering and sharing soup forever. The soup kitchen concept spread to the US from Ireland after the great Potato Famine, and for the past 150 years, soup kitchens have fed the weak and the poor.  Locally, you can find several soup kitchens that serve our community and nourish us with not only soup, but kinship and small town camaraderie.

I hope you’ll find solace in making some great soup this week—if not this recipe for Wood’s Sausage and Leek Soup, make your own go-to comfort soup. Make an extra batch to share with someone who’s been on your mind and you’ll both be grateful. 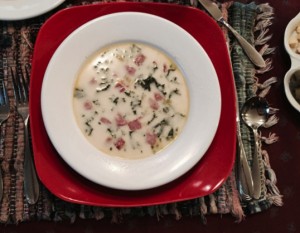 You can easily double this soup and freeze half, just omit the kale step until you have thawed, reheated and are ready to serve.

in half lengthwise and cube

peeled and cubed to ½ inch

•Salt and white pepper to taste

•Rinse leeks well to remove all dirt. Finely chop the whites and the light green parts.

•Heat olive oil in a 2-quart Dutch oven or large pot over medium low heat; cook and stir the leek, until soft, but not browned, remove and set aside.

•Add cut sausage in the hot oil and stir, until sausage is browned, about 10 minutes.

•Simmer sausage-potato mixture over low heat until potatoes are tender and flavors of soup have blended, 1 to 2 hours.

•Remove and discard bay leaves. Warm the cream, stir in and season with salt and pepper.

•Add the chopped kale, stir and ladle into soup bowls.