In preparation for National Hamburger Day this coming Saturday, May 28, I masterminded a not so scientific search for Sandpoint’s best burger. With the results in from my Facebook poll, I learned a couple of things (look for an update after I have eaten my way through the Top 5). While little is certain in this life of ours, don’t mess with a man (or woman) and their burger. The only post that came close in editorial content was a heated election clash. Clearly, people are more loyal and serious about their favorite burger joint than their preferred politician

The almighty burger. Many claimed the original recipe from around the turn of the 20th century, when they began slapping a patty of cooked ground beef between two slices of bread. While no one can be truly certain of the origin, this was no “flash in the pan” fad. About 25 years later, on a whim, a fry cook in California tossed a slice of American cheese on a sizzling patty and the cheeseburger was born (I’m not sure why it took that long, but I am forever grateful to Lionel Sternberger for making that bold move).

Everyone has an opinion about where to eat them, how to cook them and what to serve with them. Remember your first hamburger? Everyone has a childhood favorite: Wimpy’s, Bob’s Big Boy, In-N-Out, White Castle or Hudson’s in nearby Coeur d’ Alene.

When I was a kid in Montana, every couple of months or so, my mom would prepare two main dishes, liver and onions for her and my oldest sister, and sauerkraut and wieners for my father and my other sister. Really? What about the hungry ten-year old?  I couldn’t get out of that house fast enough. On those nights, Mom would hand me a quarter for a burger and I’d head on down to Smith’s Bar in East Helena with my buddy, Irene.  Occasionally my mom would throw in a nickel for a soda pop. Though I soon learned to never ask outright for that nickel, or else I was admonished for my spendthrift behavior and sentenced to water.

Oh, those burgers! Charlie Smith would throw them on the grill, peel off the slick white paper and toss on a little pre-mixed salt and pepper from a worn old metal shaker. From my stool at the bar, I’d twirl back and forth in eager anticipation (twirling was an art, if the stool squeaked, we risked being scolded by Charlie).  The other stools were filled with old immigrant smelter workers, rewarding themselves with a chilled mug of beer after their swing shift at the smelter, and sometimes they’d give us a nickel for a coveted cola. Or a dime, which meant on the way home we’d stop at Lucky’s Fountain for penny candy (sometimes lingering at the entrance to hear Charlie Pride and the Nighthawks performing at the U & I Club, right next door).  Once Charlie slapped the mounded top bun on the burger and covered it all with a grease splattered dome lid, I could almost taste that burger.

Fifty years later, burgers are not just iconic to us: you’ll find one sizzling in nearly every country in the free world. There are more than 6,000 burger-related books listed on Amazon, and more than 20,000 items you might be able to live without.  If you’re not on a budget, how about a caviar or black truffle topped burger, in the $300 to $400 range?

If that sounds excessive, you might be interested in the Blended Burger Project™. It’s a movement encouraging restaurants to make burgers better by blending ground meat with chopped mushrooms, creating an incredibly delicious patty that’s healthier and more sustainable for the planet (one lucky participating chef  will win a trip to cook at the historic James Beard House).

While many locally-favorite burger restaurants cite success to their meat source (namely Wood’s), others still claim the flavor comes from their grill or sauces.  When I make burgers, I like to include lots of condiments and toppings for a wide-range of palates. My favorite cheese is Jarlsberg (I like the way it melts on the burger), and some of my favorite toppings are bacon jam (recipe in my May 12 column), tziki, thick with lots of feta, and my own version of secret sauce (now no longer secret).

So whether your burger experience requires a boat, a bike, a broiler or even a bun (mine don’t), I hope you’ll bite in to one on Saturday—or sooner—in honor of this sacred holiday. 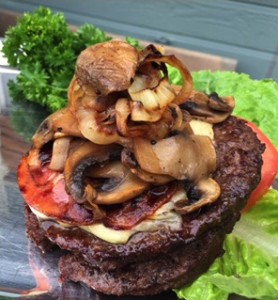 This sauce is super tasty smeared on a grilled burger (or practically anything else, wonderful on top of thick tomato slices too).

Place feta in mixing bowl, and break up to pea-sized pieces, whisk in yogurt, olive oil and lemon juice and whisk until well mixed. With a spoon, stir in cucumber, garlic, onions and oregano and zest. Mix well and add salt and pepper as you please. Store in refrigerator. 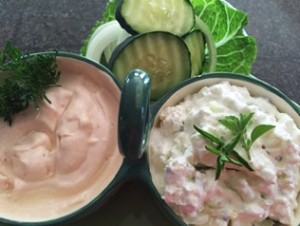 Especially good on a bacon-cheeseburger, the smoked paprika that gives it just the right blend between zesty and smoky.

Stir all ingredients together. Taste and adjust seasoning to your palate.