Despite the sound and fury surrounding the Festival at Sandpoint’s policy banning weapons at the publicly-owned War Memorial Field, city officials said they still haven’t received any paperwork indicating that legal action is pending — this, despite the fact that the Bonner County commissioners, Bonner County sheriff and Idaho Second Amendment Alliance have all rattled their sabres over the issue in recent weeks. 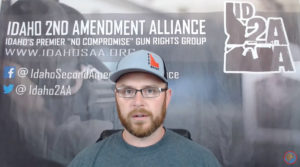 “We had received demand letters from both the county as well as the Second Amendment Alliance. The city has not been served with a suit or notice of a lawsuit action by any entity as of this point,” said Sandpoint City Administrator Jennifer Stapleton, who added that verbal sparring in print and on social media have muddied the reality of the situation.

“There have been a lot of headlines saying that we are being sued and people saying we have been sued, but we have not been served with a lawsuit,” she said. “Nothing but a demand letter, which is not the same as a lawsuit. I don’t know if they don’t know the difference.”

Nonetheless, Bonner County’s “declaratory action” against the city, which challenges its authority to allow the Festival to ban guns on publicly-owned property, isn’t the only potential legal action to come out of the controversy.

The Idaho Second Amendment Alliance, based in Boise, made it known in a handful of videos posted to the organization’s Facebook page between Sept. 3 and Sept. 9 that it was raising the $10,000 necessary to retain lawyer and gun rights advocate Alexandria Kincaid. What’s more, ISAA President Greg Pruett said in the videos that his group stands ready to sue Sandpoint if it doesn’t “back down” from its position that the Festival, as a lessee, has the power to establish its own rules about who can and can’t enter the venue.

“You don’t have the authority or the ability to regulate the possession of firearms in this public park. How can you possibly give this authority to someone else? That’s not a thing. That doesn’t exist,” Pruett said in the Sept. 3 video.

Vocal Bonner County constitutional conservative activist Scott Herndon would be the plaintiff in ISAA’s suit. His attempt to enter the Festival while armed — he was turned away at the gate — was engineered to trigger the controversy during the first week of the 2019 concert series. As Pruett put it in a Sept. 7 video, “Me and Scott and our attorney, Alexandria Kincaid, had made an agreement that, ‘OK, if Scott goes and he gets denied, we’re going to pursue legal action.’”

According to Herndon, “My ideal outcome would be a declaration by a court that the Festival’s policy in a public park is unlawful and that the court would enjoin a prohibition on firearms at War Memorial Field or any other public property, regardless of whether that property is being leased by a private company,” Herndon told the Reader in an email. “In addition to a declaration and injunction, we would also seek our attorney’s fees and costs of the suit.”

Both Herndon and Pruett touched on the larger implications of a legal ruling in the case.

“The issue is one that has broad application in other venues around Idaho, and so both ISAA and myself consider it a critical issue to resolve through this one particular case as a potential precedent,” Herndon wrote.

In his various videos, also posted to YouTube, Pruett repeatedly emphasized the test-case nature of ISAA’s challenge to Sandpoint.

“The Sandpoint issue right now is the focal point, that is ground zero for what may potentially turn into a long-term legal battle over establishing the fact and the reality that these private entities should not be able to restrict your rights on public property,” he said in the Sept. 3 video, going on to add that win, lose or draw in court, ISAA will push for legislation to make it illegal for municipalities to lease public property that then becomes a “gun-free” area.

“We’re going to try to change the law that will prohibit them from doing this. Not only prohibit it, but actually punish those who are knowingly and willfully doing this,” he said. “Our [Idaho state] preemption statute is great to an extent, but there’s no teeth in it. There’s no punishment for these people; there’s almost nothing we can do to them individually, so now we’re forced to go after the city for attorneys fees and other stuff that we can.”

Pruett’s organization has pushed back on similar issues in the recent past, including at the Canyon County and Twin Falls County fairs, where organizers asked attendees to leave their guns at home. Pruett, however, challenged both fairs, citing Idaho state law that prohibits any government entity from limiting an otherwise legally-entitled person’s right to bear arms. That includes on public property, and in the case of the fairs in southern Idaho, Pruett had a clear point because county governments were the ones barring guns on public property.

The Sandpoint case isn’t as straightforward as what ISAA faced in Canyon and Twin Falls counties. Crucially, the city isn’t the entity saying concert goers can’t come to the show packing heat — that policy comes from the Festival, which is a private nonprofit. And that’s what makes this legal argument so appealing to Pruett, who stresses that nowhere in the country has such a case like this come up with regards to the Second Amendment.

Citing a decision in the Ninth Circuit Court of Appeals, Pruett said at least one judge has already ruled that leasing public property does not convey the right to limit the First Amendment. He mused aloud in videos posted online Sept. 3 and Sept. 7 that such a precedent could be readily applied to the Second Amendment.

“This isn’t about Sandpoint. There’s only like 8,000 people in Sandpoint, right? We’re not expecting the gun owners in Sandpoint to do all the work. This affects all of us, every single one of us here in the state of Idaho and potentially, if it goes up to the Ninth Circuit, it could potentially affect everybody in the Ninth Circuit,” he said in the Sept. 3 video after warning that pushing back against the Festival at Sandpoint is part of a larger strategy to challenge municipalities and other entities over their “radical progressive ideas.”