Finding treasure at the dump

We were unprepared our first visit. We simply had no sense for the possibilities. We stood in the valley between two long ridges of lumber waste and stared in awe – like pioneers in a newfound promised land. Like scavengers in a trash-filled wonderland. Skeletal furniture legs peeked from the cracks afforded by a tangle of branches and plywood. Pallets and dimensional lumber whispered to us of DIY opportunities.

We’d discovered the marvel that is the Colburn Transfer Station.

The only furniture in our home at that time was of the folding variety – futon, card table, camp chairs – but what our eyes soon rested upon was the real, home-furnishing deal: a wooden couch frame and chair. Novices that we were, however (we thought this was just a place to drop off trash), we’d brought no tie-down straps. I ransacked the truck and emerged triumphant with the dog leash. We “secured” the couch to the vehicle, tucked the chair inside of its frame, and drove happily – albeit slowly – away. 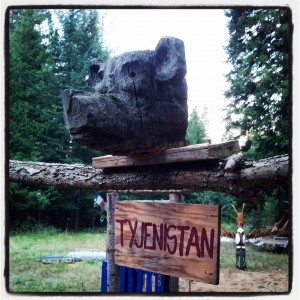 A carved bear head and totem pole–courtesy of the dump–guard the garden. Photo by Jen Jackson Quintano.

The Colburn Transfer Station is the poor man’s Ikea and Home Depot wrapped up in an odiferous yet tantalizing package. In fact, I’ve heard it referred to as the Colburn Mall. Our first poverty-stricken years in Sandpoint found us “shopping” there more often than not. Sometimes, we would simply peruse the wood waste pile as a pick-me-up in the throes of a shared what-are-we-doing-with-our-lives depression. The dump rarely disappointed.

An enumeration of our finds includes:

•One couch (for which we had no cushions, so I slightly inflated our air mattress, tucked it into the frame, and covered it with a blanket…voila!)

•Two TV trays (though we don’t own a television)

•Countless chairs (typically used as our lawn furniture until they disintegrate under the elements; then we trade them in at the dump).

•Dimensional lumber (enough to build a deck at no cost, save screws).

•A carved bear (because everyone in Bonner County needs one).

•A gliding rocking chair (for the baby’s room) 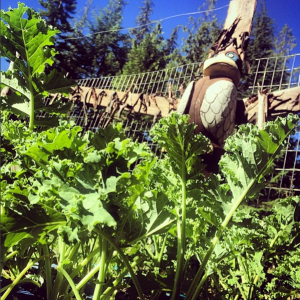 •Partial sheets of OSB (we used them to put on a new roof; no leaks!)

•And the crowning jewel: an eagle-topped totem pole that stands over our garden (who takes a totem pole to the dump?!)

Such a wonder is the Colburn Transfer Station, we tend to take visiting family there. Not to the lake, not to Schweitzer, but to the dump.

My parents visited one Easter weekend, and Sunday morning was spent spelunking in the woodpile – like an Easter egg hunt, but with greater chances at tetanus. Tyler’s parents may now live here due to the lure of the dump. Though I’m sure the grandbaby had something to do with their relocation, I also know that they’ve been visiting the transfer station on their own.

When we escorted my young cousins to Colburn, they were in awe. Their poor father had to curb rampant enthusiasm, limiting take-home treasures to what could fit in one hand. Reagan found a magic wand (a spindle from a chair back). Emerson found what came to be called “The Rabbit Stick:” a long cane with twine and some part of a deceased furry creature attached. I’m pretty sure it was a magic wand.

One family trip – with aunts, uncles and cousins – found us filling the back of the Subaru with bricks in order to build raised beds for strawberries. The plants are now flourishing. The same seven members of the family will return this month, so I will feed them strawberries…and take them to the dump.

We once joked to a neighbor that our coming weekend plans were to set up a cooler, chairs and an umbrella in front of the lumber heap. That way, we could be the first to vet and snag incoming items. Our neighbor told us that his father might have actually beaten us to the punch.

Several years ago, we met a man at the dump who proudly informed us that the structures on his property were built entirely of scavenged lumber. We’ve met people who get all of their firewood from the pile. They bring their chainsaws to the dump and buck up home construction byproducts to heat their own abodes. 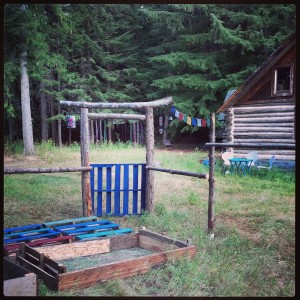 A garden of pallets.

What we have at Colburn is rare. Few dumps allow foraging for purposes of repurposing. Most transfer stations are rather proprietary about their waste and are overly afraid of lawsuits from people who do stupid things while combing through it. Bonner County actually trusts us residents to be rational and safe when perusing the woodpile. All we rubbish connoisseurs have to do is sign a waiver, and great riches (albeit riches full of nails) become accessible. It’s a win-win situation: Area citizens find appropriate items for their homes at no cost while the county  saves money by disposing of less waste.

Sadly, we don’t often visit the transfer station these days. Now that Rapid Lightning is paved, we enjoy trash service. And though we still need lumber for various and sundry projects, our business recently purchased a sawmill. We’ve moved up in the world.

I miss Colburn, though. There was always a sense of anticipatory glee on the drive there: Would today be the day that we struck gold? Another totem pole, perhaps? Or would we get skunked? It was like a trip to the dirtbag casino, but without the cloud of cigarette smoke, the cost, or the hangover.

Recently, we did have reason to return. Property cleanup left us with a trailer-load of trash too large for Waste Management to handle. We hoisted our little girl into the truck for her first visit to the Colburn Transfer Station (a milestone in any child’s life).

As Tyler disposed of our wood waste, I walked Sylvie along the base of the hill. On that day, it was mostly branches and logs. It was not the homecoming I had hoped for. What would we do for lawn chairs this year? Just as I turned around to head back to the truck, Sylvie became animated.

I scanned the ground where she pointed, and there rested a perfectly intact toy horse – her favorite animal. Sure, it was in need of a bath, but it was only covered in dirt, not biohazard ooze or anything. Wet wipes did the trick for the drive home.

The horse is now cherished, as are many other dump items. The couch frame was our main seating for years. It is where I dozed with my brand new baby on the first languid afternoons of her life. The totem pole eagle has blessed numerous kale and carrot crops. The TV trays held food and drink at the dinner gatherings that caused our newfound social circle to coalesce.

Reduce, reuse, recycle. Recover, redeem, rejoice, repeat. This is the Colburn Transfer Station. This is Sandpoint. This is home.