The Road to Recyling:

Community members are stepping up to improve regional recycling, but they need help

It’s the season for spring cleaning, and Jennifer Del Carlo has a particularly big project on her hands.

She and several other community members have their sights set on tidying up the greater Sandpoint region. To that end, they’re focusing on refining local waste management and recycling programs, a goal that may well be accomplished through the as-yet unmanned Sandpoint Sustainability Committee. There’s just one problem: To date, the city hasn’t received enough commitments to get the committee off the ground. Del Carlo and her friends are now asking Sandpoint residents for help on a project that could benefit the entire county.

The sustainability committee has been a long time in the making. It got its start in 2012, when then-council member Jamie Brunner proposed its formation. The next year saw the City Council ask staff to draft an ordinance establishing its creation, which was passed in August. According to the ordinance, the committee’s purpose is to serve in an “advisory capacity to the mayor and city council to aid in the process of effective, responsible, and efficient government, with the goal of enhancing connectivity, promoting good stewardship, ensuring resilience and fostering socioeconomic health.”

More than two years after its authorization, the sustainability committee still has no membership. According to the ordinance, the mayor must appoint committee members, which the City Council then confirm. In order to do that, however, he needs at least five applications from city residents. And while Del Carlo or fellow recycling advocate Cindy Peer would be happy to apply for the committee, they don’t live within city limits—a requirement for service.

It was Peer who first discovered the opportunity presented by the sustainability committee. She emailed the city, recommending that officials put together a team to improve local recycling options.

“She reached out to Shelby when she found out he was going to be mayor,” Del Carlo said. “She figured if there was anyone who would embrace that kind of project, it would be him.” 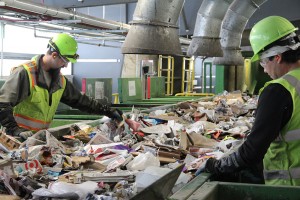 Aaron Qualls, director of Sandpoint’s Planning and Zoning Department, replied to Peer, saying the framework was already in place—it just needed the volunteers to run it.

The call for enhanced recycling programs is nothing new; in fact, it was identified by experts as a cornerstone of sustainable community development. Shortly after City Council members authorized the creation of the committee, they welcomed the Idaho Community Review into town. A state-run program bringing together experts in various field to evaluate small town stability, the Idaho Community Review team conducted a multiple-day investigation of Sandpoint, identifying its sustainability flaws and recommending areas of improvement.

Improved access to recycling was prominent on that list. “Encouraging recycling and reducing waste” was fourth in a list of priorities identified by community members with 81 percent of respondents calling it very or somewhat important. It was only surpassed by protecting the water quality of the lake, increasing livable wages and employment opportunities, developing higher education and supporting locally produced food.

“Home team members and Sandpoint leaders informed the visiting team that use of the existing recycling program offered by the city’s solid waste contractor is significant,” the team stated in its report. “It is well known, well organized, and appreciated. At the same time, we also learned that comparable opportunities are not available to businesses.”

The team ultimately recommended that Sandpoint review its policies for waste reduction and recycling, suggesting that a task force prioritize strategies to reduce and recycle, identify business development opportunities, determine composting feasibility and plan outreach. This could be accomplished through many practical projects, most importantly through communication and collaboration with Waste Management and Pacific Steel Recycling.

Del Carlo and Peer’s goals closely mirror those expressed by the community review team. They want to see enhanced compost services as well as curb-side recycling made available to all businesses. In addition, they hope to establish dumpster locations where people can deposit all recycling materials without worrying about sorting them out.

There are certainly challenges to overcome, glass recycling chief among them. Because glass is so heavy and costs so much to ship, recycling programs struggle to become economically viable. In 2012, it appeared a solution had emerged in GlassRoots Recycling, a small business that set up shop in Sandpoint’s business incubator facility. However, GlassRoots was eventually overwhelmed by the demand.

According to supporters, those sorts of challenges are exactly why Sandpoint needs a guiding force for community sustainability. Those interested in volunteering on the sustainability committee can pick up an application at City Hall or download one at www.cityofsandpoint.com/home/showdocument?id=14. Applicants must live within city limits and have some kind of professional or volunteer experience in sustainability.

Meanwhile, Del Carlo aims to continue working toward expanding recycling programs throughout the county. Those who wish to help in that effort can email her at [email protected]