The Reader interviews G. Love and the Special Sauce

Sometimes a performer comes along and redefines the genres in which we listen to music. Garret Dutton—better known as G. Love—did just that in the early ‘90s when he fused blues with hip hop. Now, some 20 albums later, G. Love is still touring 150-plus days a year with his special brand of sauce. I had a conversation with G. Love about the inspiration of his unique style, his latest studio album, life on the road and what’s next for the keeper of the Special Sauce.

BO: You’ve been making music for decades now. Where did the inspiration for the blues hip hop fusion thing come from? 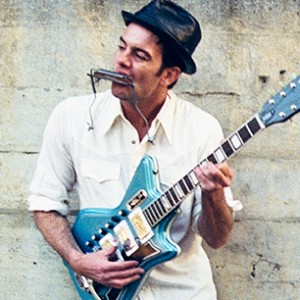 G. LOVE: It just kind of happened, honestly. I grew up playing acoustic guitar and then I learned the harmonica. That led me into the Bob Dylan side of town at a young age. I started listening to Dylan and it subconsciously inspired me to write songs. After that I started performing out at coffee shops and open mic nights. I saw a lot of people were also interested in Bob Dylan. I definitely had an instinct at a young age that I had to be original, so if everybody else is doing Bob Dylan at these open mics, I was digging for an original sound.

I stumbled upon the delta blues of John Hammond—he played guitar with harmonica—and that led me to finding the delta blues. Once I found that, I really felt like I found something unique that no one in my circle was hip to. As a writer, I was always writing about the cityscapes of Philadelphia. I grew up as a hip hop kid in the ‘80s, listening to Beastie Boys, Run DMC and LL Cool J like everyone else. Hip hop was this exciting new music you didn’t think you could really do as a white kid, but it was part of me, I was a graffiti writer and basketball player and break dancer as a kid. I was always interested in hip hop culture. One day I started rapping to I started rapping to Erik B. & Rakim song, “Paid In Full” over his blues riff. At that particular moment, that was the epiphany, I said, “Now I’ve got it.” A week later I wrote my first rap over a slide guitar riff, and I said, “This is it.”

You found your sound?

I knew it. It was like the whole world just opened up. I knew I had something.

Your latest album, “Love saves the day,” is it your tenth?

Including the bootlegs and solo records, it’s like the twentieth.

Wow. I noticed a few cuts on it that swung a little into the rock realm. Was that on purpose?

I think what it is … if you keep pushing the blues you’ll end up with rock and roll. We came about it in the right way. If you learn your rock and roll from the Foo Fighters or Led Zeppelin or the Rolling Stones, you’re separating yourself by different generations from the source, which is the blues. A lot of the great rock and roll bands started out as blues bands … We were a blues band, and then we kept pushing it and pushing it, and we ended up on the rock and roll side of town.

You had a lot of guest artists on this new album. What was it like working with some of them?

Aw man, it was so awesome. For one thing, David Hidalgo [from Los Lobos] came in the first night. He is such an amazing player, he just brings it … he raises the bar … We had a six-day session with all these special guests. Everybody brought their flavor. Citizen Cope came in … Lucinda [Williams] came in, and she was very much like us, she liked to just let shit fly, no rehearsal … We had never met her before, and that was cool.

Ozomatli came in. We toured all around the world with these guys, they’re just good friends. … One of the most special things of my career has been the musical friends that you meet along the way … There’s a real deep love and a sense of community, it almost makes you tear up. We’ve got so much love for those guys, we don’t get to see them very often, to come together and make some music, we did that song “Let’s Have a Good Time,” and you could tell we were having a good time.

I read somewhere you play 150 shows a year.

Yeah, we’re pretty much on the run for most of the year. I think back in the day, we did up to 250 shows a year. Now we do between 100-150 shows a year … I like to play. You do have to figure out a balance, you can get burned. You have to pace yourself. You have to think about it like a marathon. Your career, tour, making records. You gotta have the right energy at the right time and be ready to deliver. The great shows are the things that keep it going. All the rest is bullshit. The business is bullshit. The travel is bullshit. The thing that counts is playing the music. If you don’t put love into that music, then you don’t get it back. Then shit starts to feel wrong, so it’s all driven on the creative side of things. That’s why the chemistry of a band is so important. I always say about music, if you’re an athlete, you know whether you won the game or broke a record. With music, you don’t know because it’s such a subjective thing. You can play a sold out stadium and not feel good about your performance. You can cut a record that gets a lot of radio play but maybe you won’t be happy with how it came out.

What’s next on the radar?

We’re just super focused on the tour right now. We’re actually performing the entire new record as the first set, which is something we’ve never done. And then the second set, we’re doing all social media driven requests. We’re looking forward to a great tour and getting up there on the mountain with y’all.

G. Love and the Special Sauce will be playing the Hive Thursday, Feb 11. For tickets, go to www.LiveFromTheHive.com. To check out more from G. Love, tune into @Glove, or on Instagram at  @PhillyGlove. You can also check out all the tour info and listen to some new cuts at G. Love’s website at Philadelphonic.com.