A grand celebration of music

The Music Conservatory at Sandpoint (MCS) is about to spread its wings a bit.

The acclaimed organization dedicated to all things music will now occupy the entire building at 110 Main Street in Sandpoint. To celebrate the growth, MCS will be holding a Grand Expansion Celebration and Open House on Saturday, Aug. 27, from 10 a.m.-7 p.m. 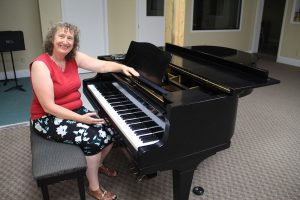 “We received a notice in April, completely out of the blue,” said Karin Wedemeyer, executive director of MCS. “The building owner said we could expand into the downstairs and they wouldn’t charge us for the square footage. All we had to do is pay for the utilities for the whole building.”

Wedemeyer and her staff figured the additional utility costs into their budget and found that it was possible to go through with the expansion.

“It was a small, unassuming email,” she said. “But it was really big news for us.”

The expansion more than doubles the current occupancy space for MCS. The extra space will certainly come in handy, as MCS currently has over 220 students with 10-percent growth occuring every year.

The most important addition is an auditorium that will seat 100 people they’ve dubbed “Little Carnegie Hall.”

“We really needed a theater and recital space for our classes,” said Wedemeyer. “This was a blessing.”

Wedemeyer plans to build a stage and hang curtains in the auditorium, as well as acoustic work. In the future, plans are to raise the lowered ceiling and even open up the doors where fire engines used to drive through onto Second Avenue.

To celebrate the expansion, MCS will host free activities throughout the day.

From 10 a.m. to 1 p.m., join MCS instructor Michelle Handy for a hands on exploration of the Little Mozart Class. There will also be an “instrument petting zoo” set up for children to try their hand at various instruments.

Creations for Sandpoint will join MCS in providing musical crafts, a smoothie bus, face painting and other fun kids’ activities.

At 1 p.m., Keely Gray and MCS theater students will perform “The Importance of Being Earnest.” At 2 p.m., Ali Thomas and Cody Mills will lead an open drum circle.

Starting at 4 p.m., there will be a very special ribbon-cutting event to honor jazz pianist Bill Reid and his wonderful donation of a grand piano to MCS.

Bill Reid lived in Sandpoint for 70 years and lived the good life as a musician, soon falling in love with jazz and its “creativity in the moment” gift of improvisation. 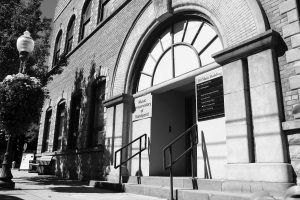 The entrance to MCS. Photo by Ben Olson.

“He had huge hands that could stretch to 11 keys. They allowed him to play things others could not,” said jazz singer and artist Maria Larson. “He was a man of few words, but he communicated through his music. He was some kind of guy… the gift of my life, I loved him so much. He was my family.”

Larson performed in his trio for 13 years just before his death in March, 2016.

The 1964 Yamaha G-2 grand piano was generously donated through a combination of efforts with the Robert Wishnick Foundation, the Equinox Foundation and the family of Bill Reid. After everything went through, Wedemeyer was pleasantly surprised when the piano was delivered the same day.

“It’s such a wonderful instrument and has a lot of character,” said Wedemeyer. “Ever since we’ve had the piano the music never stops.”

Wedemeyer compared the acquisition of the grand piano as a mother giving birth: “We were in labor for seven years to get this piano. When it was ready to be born, it happened in just one day.”

Local musicians Peter Lucht and Larry Hanna will be leading the charge as classically performances, trios, vocal, piano trios, flutists and aspiring students play from 5-7 p.m. There will also be hors d’oeuvres served.

Wedemeyer recognizes this expansion as a grand milestone in MCS’s history, which began in 2009 in Sandpoint: “I think this building is the perfect building for a conservatory. A school like this should be in the downtown area.”

This expansion is just the beginning for MCS, according to Wedemeyer, who has her sights set on loftier goals.

“Our school is now accredited, and we’ll climb up different levels of accreditation,” said Wedemeyer. “At some point, we’ll even be able to give degrees, both bachelors and masters.”

MCS is also open for rooms to be adopted, which will help fund operations for years to come. Smaller rooms can be adopted for around $2,800 per year, while the Little Carnegie Hall will go for around $10,000 per year. Each adoption allows the patron to attach the name the room for the year after their business.

In the near future, MCS has plans in motion to hopefully purchase the building outright, cementing their place as a downtown fixture for years to come.

“Ultimately, we’ll start our capital campaign next year to acquire the building,” said Wedemeyer. “That’s our ultimate goal. With this expansion, we’ve come that much closer.”

To attend the free daylong series of events and activities, stroll into the new downstairs offices at MCS at 110 Main St. in Sandpoint from 10 a.m.-7 p.m. on Saturday, Aug. 27.