The quest for balance

Jeff Pufnock was several years into a career in immunology — specifically, searching for a cancer vaccine — when he realized Western medicine wasn’t approaching healing in a way he found effective. 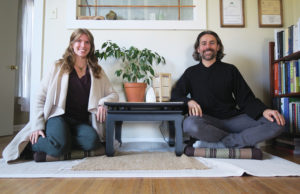 “I figured out, through my own healing processes as well as through seeing the Western medical treatment paradigm, that we weren’t really addressing what was the underlying cause of people’s disease,” Pufnock said. “[We were] basically just treating what they had.”

Pufnock’s partner Jessica Youngs also started her path in medicine on a more Western route, studying biochemistry before switching gears to study and teach yoga. When a shoulder injury led her to try acupuncture, the physical and emotional release she experienced inspired her to pursue more holistic practices.

“I think that’s why we both came to Chinese medicine — it’s really about body, mind and spirit,” Youngs said. “That’s the main principle of what we do — integrating those.”

The couple met at the National University of Natural Medicine in Portland, Ore., and ultimately decided to take their training in Chinese medicine to a new, smaller city. They embarked on a two-week road trip a couple of years ago, stopping in Sandpoint in August to find downtown alive with the Arts and Crafts Fair, desirable local amenities like good coffee and a co-op grocery store, plenty of opportunity for outdoor recreation, and even one of Pufnock’s favorite bluegrass bands slated to play the Festival at Sandpoint during their visit. It appeared the pair had found a new home.

“I’m like, ‘What is this town and why is my favorite band playing?‘“ Pufnock said with a laugh. “We had this checklist of all the things that we wanted, and this place had everything on the checklist.”

After a few more visits and finally stumbling upon the perfect place for their business on Church Street, Youngs and Pufnock opened Embodied Virtue Acupuncture and Herbal Medicine. Though acupuncture is often associated with helping people through injuries and other chronic pain, Youngs said she and Pufnock deploy several modalities of Chinese medicine to help people with digestion, sleep, respiratory issues, stress, migraines, aging, women’s health and more.

“Acupuncture can treat pain, but that is the most physical manifestation of what we do,” she said. “That’s just one level. We can address so many aspects of each person’s individual being.” 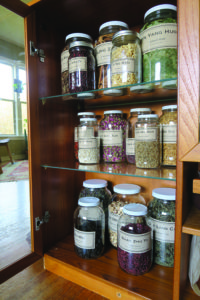 A sampling of the herbs available through Embodied Virtue. Photo by Lyndsie Kiebert.

In order to address what a person needs, Youngs and Pufnock first suggest anyone with inhibitions about how Chinese medicine could help them should schedule a free, 20-minute consultation. Once a course of treatment is discussed, either practitioner will use a series of diagnostic tools to take stock of what the patient needs, including gauging the qualities of the pulse, analyzing the tongue and asking a series of detailed questions. According to Youngs, it’s not just about what the patient answers, but how they answer as well.

Pufnock said the National University of Natural Medicine in Portland is the last Chinese medicine school in the country to train classical practices, whereas many schools have moved toward more modernized approaches. Youngs and Pufnock studied translated texts from over 2,000 years ago as they went through acupuncture and herbal training. Despite the age of the material, both agreed classical Chinese medicine has stood the test of time.

“I thought no one would ever come in and say they feel like they have a cold washcloth on their back, but that was written in a text book thousands of years ago, and I had a patient come in and say, ‘It’s like I have a cold washcloth on my back.’ It’s so crazy,” Pufnock said. ”Energetics have changed slightly, but your body is still the same body. [The Chinese] took meticulous notes for thousands of years and documented everything. So people passed down what worked for thousands of years, and that’s where the whole system of acupuncture points come from.”

While the body’s energy system can be a hard concept to grasp, Youngs said it helps to view the body as a system of roads.

“There’s highways, there are smaller roads, there are your backcountry winding roads. They all have a purpose, and there is energy — or cars — traveling to different parts of the body,” she said. “Sometimes there are car accidents and there are traffic jams, and things get stuck in the wrong places. Over time, that narrow corner always causes a problem. That one part is a weaker part of the body. There are also places on those backcountry roads that people forget about, and they don’t drive to see anymore. That’s a place that might be weak and totally deficient. Through herbs and through acupuncture, we redirect the traffic. The real goal is to have smooth flowing traffic without any congestion or stagnation and without any places that are empty. That’s what overall balance looks like.”

Those interested in finding that balance through Chinese medicine have a chance to meet with Youngs and Pufnock at an open house 5-8 p.m. on Friday, Nov. 8. at Embodied Virtue, 307 Church St. Anyone who signs up for their first appointment at the open house will receive a complimentary customized herbal formula after the appointment.

“We wanted to find a community that we could come and serve and bring our offerings to,” Youngs said, “and hopefully provide healing for people.”