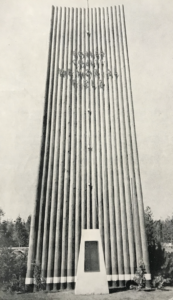 After months of activity, War Memorial Field is looking particularly tranquil this time of year.

A November weekday morning bears no resemblance to a Saturday night in early August, as the Festival at Sandpoint fills the park to its seams, or the boisterous community camaraderie of a September football or soccer game. With the nights of live music and athletic contests behind it, War Memorial Field is preparing for the long winter beside the lake, shaking off the leaves and soaking in the sun.

What persists, no matter the weather or event, is the facility’s original intent, displayed proudly at its east entrance: a memorial, with a plaque declaring its dedication to “the memory of the gallant men who made the supreme sacrifice for their country in World War I and II,” also displaying the names of about 100 lost servicemen.

Newspaper articles and other historical documents trace the memorial’s inception back to about 1947, when Bonner County Commissioner M.D. Hart received a letter from the Sterling Memorial Company of Ogden, Utah, in response to an apparent inquiry about purchasing a bronze plaque to honor North Idaho veterans. The Sandpoint News Bulletin reported the creation of a Bonner County War Memorial Commission in June 1950 — the group responsible for designing and building the structure.

An article from the News Bulletin on May 24, 1951 described the memorial as a “uniform sized tall, peeling larch poles … used for the background … they were made 30 or more feet in height. A concrete pillar was placed in the foreground bearing a bronze plaque upon which are inscribed the 90 names of Bonner County’s honored war dead.” The memorial was officially dedicated with a parade and service May 30, 1951.

A printed program from the event shows a parade of local veteran’s organizations at 10 a.m., followed by a performance from the Sandpoint High School band at the field. The dedication began with an invocation from Reverend Frank Lowther, followed by the introduction of the Memorial Commission: Veterans Ted Huetter and Walt Roos, along with County Commissioners Hart, Glenn Reed and Calvin Huff. The dedication also featured words from memorial designer Russell Kotschevar, Hardy Lyons giving the Memorial Day address, Admiral Harold Bye placing the memorial wreath and a benediction from Reverend P.J. Ahren. A firing squad salute, taps and the high school band wrapped up the ceremony. 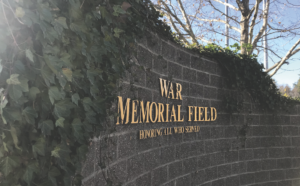 The wall at the northeast side of War Memorial Field states “Honoring All Who Served.” Photo by Lyndsie Kiebert.

In the years following, the Memorial Commission worked with local people like Cotton Barlow — longtime Sandpoint football coach for whom the stadium portion of the facility is named — to turn the memorial into a full-blown athletic destination.

Through a combination of state and local funding, largely through donations of money and labor, War Memorial Field saw substantial changes over the years. Throughout the 1950s, the commission completed one piece of the facility at a time. The Sandpoint News Bulletin reported on Sept. 6, 1956 that “bleachers of the permanent type were built to hold 1,000 people. The field also received new temporary and moveable seating to handle nearly another 1,000 people. And electric clock and scoreboard have been put up. What will be next remains to be seen.”

What came next were decades of football games and Memorial Day ceremonies, and the field receiving a major facelift in 1976. What began as an idea to honor fallen soldiers is now an active, state-of-the-art, 4.5-acre sports complex complete with a 2,700-square-foot field house and a recently renovated covered grandstand capable of accommodating nearly 900 spectators.

More than 70 years since its inception, War Memorial Field is still living up to its intention, as described by a plaque at the east entrance: “Dedicated by the people of Bonner County in honor of the fallen men of the past, with the hope and prayer that this field shall be for sport and games without the cloud of conflict and the threat of war. That the future participants shall play in peace forever.”

A special thanks to the Bonner Co. Historical Society and Museum for providing the newspaper articles and documents used to research and write this article.