Looking out the window of my seventh-grade history class, my dearly departed summer vacation was all that was on my mind before the unexpected PA announcement.

“There’s been a terrible accident—one that affects us all as Americans,” the principal said in the message.

We were brought to the gymnasium, where a couple of TVs were set up, a smoking tower on the screens. “I heard it was a bomb … no, a plane,” some speculated, followed shortly by gasps as we saw a plane smashing into the building. At first, we thought this was a repeat of the original incident.

We later learned this was a second attack. School ended as a half-day, and we went home. Normally this would be a fantastic turn of events, but absolutely no one expressed half-day joy, or any other recognizable emotion. The World Trade Center was only 60 minutes away.

After getting dropped off and beginning my short walk home, I heard the bus tires squeal from quick acceleration. I looked back and saw an enormous cloud of black smoke fill 20 percent of the skyline, a silhouette against Connecticut’s famous fall colors. 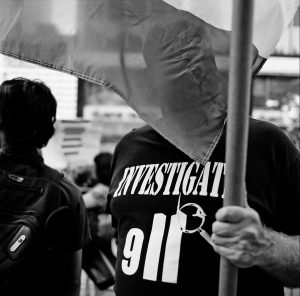 Pro-Mosque protester at Ground Zero during the 10-year anniversary of 9/11. Photo by Cameron Barnes

Fifteen years later and 2,601 miles away from Ground Zero in my new home of Sandpoint, it’s still strange to remember that while I was within eyesight of the disaster, my experience mirrors that of almost every other American.

Later on in life, while completing school in New York, I made it a point to cover all of the anniversaries at Ground Zero I could. Of these years, the 10-year anniversary was certainly the most intense in every way. Controversy ran rampant among New Yorkers over the proposed mosque to be built in the vicinity of Ground Zero. This crowd needed to be cordoned into separate areas to avoid any violence. One side was supported by ultra-conservative southerners against the mosque being built. The other was made up of mostly Yankee Democrats, liberals and Muslims. Can you imagine a worse combination of protesters to collide on the streets of lower Manhattan amongst barricades and thousands of NYPD police officers?

Chris Cayson of Sandpoint (who was in Los Angeles at the time) told me, “Even across the country, straight up, bottom line, people were nicer and friendlier to each other” before the attacks. If only this humbling sense didn’t fizzle away in the honking and anger of everyday life, perhaps this tragedy could have benefited us as Americans in some small way.

In discussions regarding Sept. 11, it’s quite likely you’ve heard or said, “I will always remember where I was on the morning of September 11, 2011.” For me, this has held true considering the many other moments that are much blurrier than I would like to admit.

Although terrorism existed before Sept.. 11, 2001, it surely did not hold the same clout in our minds as it does today. I do not have children of my own, but not a day goes by when I don’t think about the ramifications of bringing a child into a world as crazy as this one.

“I will never forget when that second plane hit the second tower,” said Cayson. “It’s something I will tell my grandchildren.”

As an artist I was astounded to learn the not-so-fun-fact that lives were not the only thing lost that day.

According to “Hotel Ground Zero” by the History Channel, the “total value of art lost when the Twin Towers collapsed [was] $100 million. These lost works included pieces by Pablo Picasso, Joan Miro, Alexander Calder, and David Hockney. New York lost its emblematic skyline anchoring southern Manhattan by the twin towers, but its people won worldwide respect for the way they handled the horror and tragedy of the terrorist attack.” 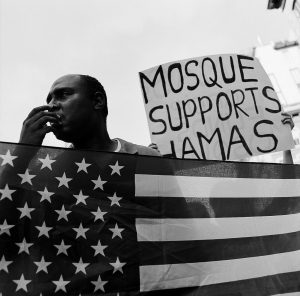 Anti-Mosque protester at Ground Zero during the 10-year anniversary of 9/11. Photo by Cameron Barnes

Besides the symbolic significance of 15 years, why is this anniversary so important? Even at 27 years old, it makes me feel old to realize that most freshman and sophomores in high school were not even born yet during the attacks. The terrorist attacks that toppled the World Trade Center buildings that fateful day now need to be considered as history alongside Pearl Harbor and the Revolutionary War.

Sandpoint’s Teya Knapp recently spoke of her 7-year-old’s perspective of Sept. 11: “When it’s time I’ll explain to him the best I can how I reacted and felt during Sept. 11 … I’m not sure if he’ll fully understand the situation because he didn’t exist, but maybe he’ll think I’m awesome because I did.”

The battle rages between young and old ideologies, naive versus stubborn. In living with my grandma (who is in her early 70s) for the past few months here in Sandpoint, I’ve heard many stories I was amazed to hear. I also felt the need to correct her according to modern social norms.

Until now, my life had always fit into the role of the young generation’s ideology as I was raised with modern notions of right and wrong.

You see it in something as basic as music. After hearing my father play New Wave ‘80s hits, I remember saying, “How can you listen to this stuff?” to which I was told, “One day you will understand, when your future child tells you how lame the Dubstep electronic music you listen to is.” Or maybe they will ask, “Maroon 5—is that like classic rock or something?”

As we all know, culture is constantly evolving. For the first time, I’m seeing it firsthand.

A new generation is coming of age that has truly never experienced something monumental. And I have.