The Queen of Compost:

The efforts to make a greener Festival at Sandpoint

Mary Ann Jeffres has been referred to as a “saint” by Festival at Sandpoint’s Executive Director Dyno Wahl. For this article’s purposes, we’ll call her the “Queen of Compost.” 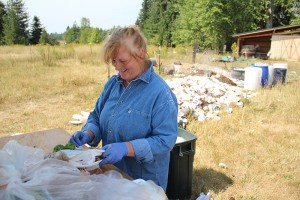 Mary Ann sorts through a fresh bag of compost from the Festival at Sandpoint. Photo by Ben Olson.

For the past five years, Jeffres has done the dirty, behind-the-scenes work that many festival goers don’t know about. She takes all the leftover food and compostable materials from each show, sorts through all of it by hand, mixes hay and manure and creates compost piles. In short, she turns trash into dirt.

“I take all of it,” said Jeffres. “Every single bit. I bring it home here and every morning, I usually have about 50 garbage bags to sort through, all of it designated to be compostable. But not all of it is.”

Jeffres sorts out the little annoying pieces of trash that make it into the compostable bins at the Festival; pieces like plastic drink straws, bottle caps, wine corks.

At Jeffres’ farm on Shingle Mill Road, remnants of past years’ compost sit in various stages of decomposition. The most recent pile—this year’s take—is still fresh, with a sprinkler keeping the items moist to encourage quick breakdown. Last year’s pile sits fifty feet away, with remnants of plastic matter and larger items not broken down yet. The pile from two years ago resembles a pile of clean, healthy dirt.

When the dirt is ready from years’ past, it is donated to several worthy causes, such as the Healing Garden or the Community Garden in Sandpoint. This year, Jeffres plans to give some to her neighbors at the Shingle Mill Blueberry Farm. She is usually able to generate about five yards of compost from each year at the Festival. 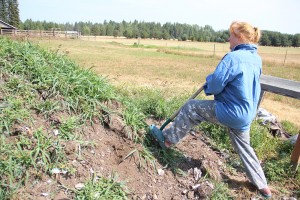 Mary Ann digs through a pile of dirt from two years ago. Photo by Ben Olson.

“I’d rather grow dirt than vegetables,” said Jeffres, while sorting through a rather ripe smelling trash bag at her farm. “To make something so wonderful out of garbage is really cool.”

“We’ve taken more strides since Mary Ann came on board,” said Terra Cressey, the leader of the ‘Green Team.’ “Every year she has less to sort out. She’s the one who got us to make the vendors go to compostable materials.”

Cressey, who has been heading up the ‘Green Team’ for five years, is passionate about taking the mountain of waste generated every year at the Festival and finding a proper home for it.

“Our team is tight and recycle-savvy,” said Cressey. “We’ve got 40 people on the ‘Green Team’ and each of them are there not just for the music, but to do the right thing with recyclables.”

Each year sees dramatic improvement, according to Cressey, who credits the learning process to “trial and error.” 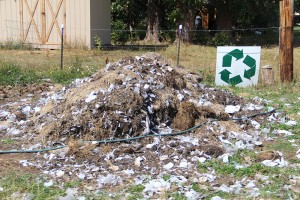 A pile of almost decomposed dirt from one year ago. Photo by Ben Olson.

“We definitely want to give the patrons of the Festival a shout out,” said Cressey. “The people know where stuff goes. They tell us where it goes sometimes. It’s a win-win situation.”

One area that needs improvement though, according to both Cressey and Jeffres, is the trash left on the field after each performance.

“When people dump their coolers out after the show, every single pile of ice has corks or bottle caps in it,” said Jeffres. “They just dump it on the field. I can’t believe it.”

“We’re still surprised that people don’t pick up after themselves better,” said Cressey. “Though it is getting better and better every year.”

The situation came to an unfortunate head last year after the Huey Lewis and the News concert. Before the “Green Team” could clean the field of debris, Huey Lewis’ tour bus drove over all the garbage—even after people waved the bus off frantically—on their way out of the stadium and ended up shattering glasses, crunching plastic, and embedding trash in the lawn.

“It was such a shame,” said Jeffres. “There was shattered glass all over the field. Some people the next night ended up with cuts on their feet.”

“Because of the Huey Lewis situation, Dave Nygren changed the format so that can’t happen again,” said Cressey. “Dave is a huge supporter of the ‘Green Team.’” 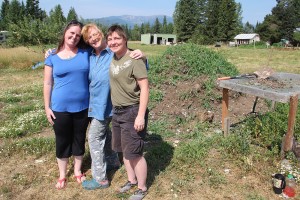 Now, the exiting vehicles take a different route out of the grounds, leaving the field free to be cleaned of trash completely.

But, according to Cressey, there were also bright moments where the “Green Team” received the recognition they deserved.

“When CAKE played here, they stopped putting their equipment away and came over and talked to us,” said Cressey. “They were so impressed with the ‘Green Team.’ They asked if we were for hire for other festivals. It made us all feel really good about what we were doing.”

As Jeffres does a lot of work on her own, she is always in need of people to help out. If you have manure or hay you’d like to donate to the cause, she’ll always accept it at her Shingle Mill farm. Another great help is if people would loan the use of a tractor to help till the piles, as the workload is too great to till by hand.

With her hands buried in last night’s meals and insects buzzing all around in the hot sun, Jeffres seems to always have a smile on her face.

“It’s so cool to make dirt out of all this,” she holds up a pile of food-soaked material. “I feel almost priviliged.”

If you are interested in donating materials to the composting effort (hay, manure, use of tractor, etc.) please write [email protected] for more information how.