The pursuit of living well

Rather than list influences or genres, vocalist and songwriter Abigail Cosio takes a different approach when describing the sound of New Orleans-based band Bon Bon Vivant.

“People may not know bands, may not know genres, but if I say joy, celebration, irreverence, a little bit of spooky, a little darkness” — people can understand that. 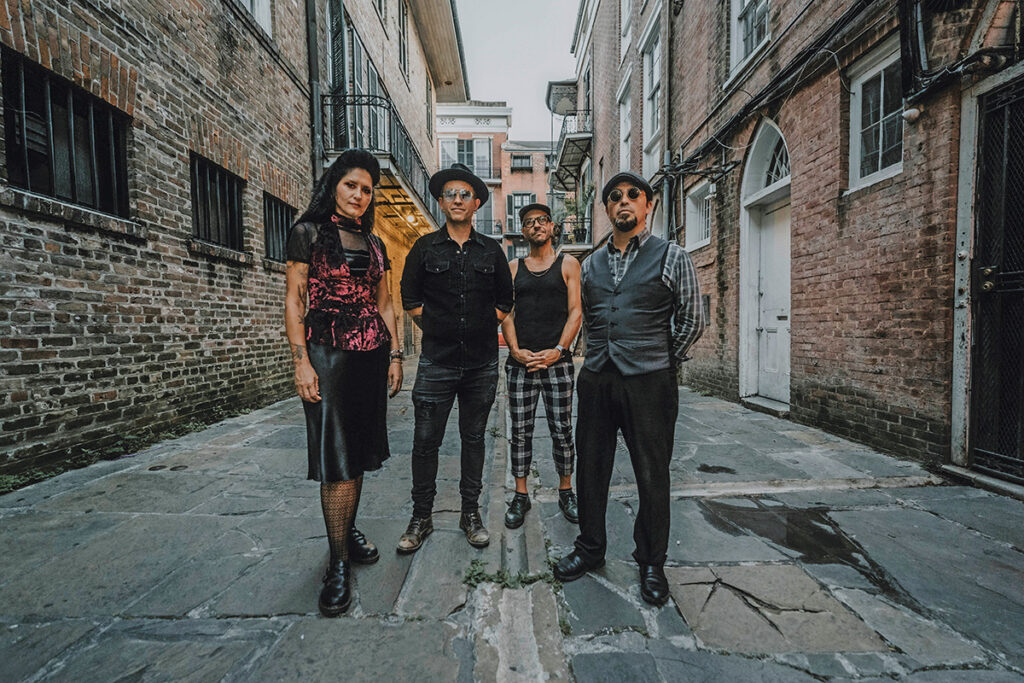 Cosio is the frontwoman of Bon Bon Vivant, which also features her husband, saxophonist Jeremy Kelley. The two met in Los Angeles in the early 2000s when Kelley went to see Cosio — at the time a solo artist — play a gig. Though he’d been playing in bands and navigating the L.A. music scene for some time, Cosio left an impression.

“Just to hear the lyrical content of Abby’s music, and the melodic structures — I was just like, ‘I have to be in a band with this person,’” Kelley told the Reader. “That’s not changed over time.”

The pair decided to leave California during the 2008 recession and landed in New Orleans, planning for a “lost year,” as Kelley put it. It’s been well over a decade since that leap and, in that time, Cosio and Kelley — along with a rotating cast of other musicians — have found their niche in the Big Easy as Bon Bon Vivant. The band’s name is a play on the term “bon vivant,” used to describe someone who enjoys living well.

“We went from one lost year to see what it was like, to staying, and now we’re in parade bands and all kinds of things,” Kelley said, noting that being “invited into that culture” has been a “gift.”

“It’s been an awesome journey,” he added.

That journey is bringing Bon Bon Vivant to Sandpoint over the weekend, with a show slated for Friday, July 8 at Matchwood Brewing at 6:30 p.m. The band will also play Sandpoint Summerfest on both Friday and Saturday nights.

Bon Bon Vivant boasts a sound rich with the swaggering jazz one would expect from a New Orleans band, but the music’s texture does not stop there. Apart from the emotions Cosio used to describe it, Bon Bon Vivant’s music is “cabaret meets indie meets dance music,” she said.

What’s undeniable is the craftsmanship that goes into the final product. Cosio’s throaty, expressive vocals defy genre, and the personality of the horns makes each song unique.

Bon Bon Vivant may not be easy to categorize, but the band’s dedication to putting on a vibrant live show places them firmly among the must-see bands in Sandpoint this summer.

While touring can be grueling, Cosio and Kelley agreed that they love playing music in the Pacific Northwest.

“It feels like [being on] a pirate ship,” Kelley said. “You drive around meeting all these interesting people and having all these experiences. You’ll be completely affirmed at a show, and then the van, just as you’re pulling out for a four-hour drive, loses a water pump. It’s like a little roller coaster all the time.”

Listen to Bon Bon Vivant at bbvband.com and follow the band on Facebook to get tour updates.