Volunteer cleanup of Hope’s Pioneer Cemetery slated for May 22

For the second year, a group of volunteer citizens will perform an extensive cleanup on the Pioneer Cemetery — or “Chinese Cemetery” — in Hope. It’s an effort to restore the historically relevant and scenic location to something more than the brushed-in mess it’s been for a number of years. 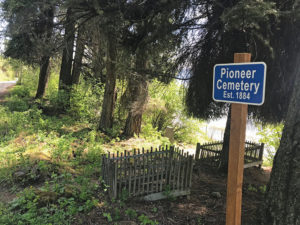 The entrance to the Pioneer Cemetery on Highland Avenue in Hope. Photo by Lyndsie Kiebert.

The colloquial name “Chinese Cemetery” stems from the Chinese railroad workers that lived in Hope in the late 1800s and were supposedly buried there, though as of now, only five Chinese graves are known in the cemetery.

“There may have been some buried up there, and they were moved later on, because ideally you always took the body back home (to China),” said volunteer Diane Newcomer.

There are stories galore regarding the historical spot in the woods, including the recent rediscovery of a headstone last recorded in the cemetery over a decade ago. Volunteer Jim Livingston, who grew up near the cemetery, recently spotted Hattie McKee’s heavy headstone back in its original resting place without explanation. The group hypothesizes that maybe a family member took it after seeing the cemetery in disarray, but was prompted by the recent renovations to return it. Regardless, the inscription on McKee’s headstone, her life dated 1851-1895, rings true: “Gone, but not forgotten.”

“They had to dynamite out the grave, because it’s all rock right there,” Howard said. “(My grandmother and her siblings) sat in their home in Hope and listened to these blasts go off, knowing that that was going to be where their mother would be in the earth. She said it just made the grieving worse.”

Howard’s great-grandmother was eventually moved to the new Hope Cemetery, where a majority of the city’s deceased are now buried and recent renovations are making room for columbariums to hold future cremains.

Before last spring’s cleanup, the most recent effort to spruce up the Pioneer Cemetery was on the part of current volunteer Pat Bistline sometime in the early 2000s. 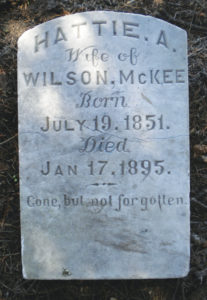 “It just seemed like it was such a neat little historical spot,” he said. “It needed to be looked after.”

This year’s cleanup effort, scheduled for May 22, will entail more brush gathering, path clearing and hopefully the discovery of more graves lost in the overgrowth. Livingston said small chainsaws, loppers, rakes, garden tools, wheelbarrows and plenty of able bodies to haul and stack brush are needed. There’s a core of volunteers spearheading the project, including several students from Elk Mountain Academy in Clark Fork, but Livingston said all are welcome and there’s plenty of work to go around.

It’s certain that maintaining and caring for Hope’s Pioneer Cemetery is nothing short of a team effort. Whether it’s Livingston organizing a cleanup day or the Elk Mountain students making time to work on a new bark path, each effort is bringing the cemetery out of the dismal state it was in just over a year ago.

Last summer, Newcomer drove past the cemetery twice a week and brought along a gallon of water for the cemetery’s flowers.

“I’ve always avoided cemeteries,” she said. “It just isn’t something I’d ever done before, so when Jim asked (if I would help) I was pretty much on the fence as to whether I wanted to do it or not. But I found it very fulfilling, and that’s why I continue to want to be a part of it.”

The group has a vision for the cemetery as an accessible, welcoming landmark celebrating Hope’s past. Ultimately, there are plans to renovate some of the cribs that adorn the cemetery and to add a bench overlooking the lake, as well as more flowers.

That vision begins with a goal that the hodgepodge of citizens — particularly Livingston — is passionate about.

“Clean it all up,” Livingston said, adding later, “we need a lot of help.”

Join the cleanup effort Wednesday, May 22, starting at 9 a.m. To get there, take Highway 200 to Hope. Just before the bridge over the Hope boat basin, a business route takes off to the left. Turn there, then take another left, uphill on Highland Avenue, which climbs up behind the large yellow retaining wall. There’s a small turnout on the right-hand side at the top of the hill where some people can park, and a blue sign marking the cemetery is visible from there.

Those with questions can reach Livingston at [email protected]