This July, SummerFest will be celebrating its 25th year (including the prior iteration known colloquially as “Jerry Fest”). Recently, the organizers announced the 2019 lineup to mark this milestone, and it looks to be another great year under the stars. 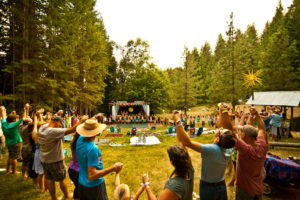 SummerFest takes place July 12-14, with over a dozen bands on two different stages scheduled to play Friday and Saturday night. The action takes place at the Eureka Institute in Sagle, a retreat featuring one amphitheater stage and another side or “forest” stage, plus ample space for camping, recreating and spending time with family.

Friday, May 12, will see four excellent bands on the main stage. Headliners Trout Steak Revival are returning to the SummerFest stage again this year. Trout Steak Revival has quickly become the quintessential Colorado string band, blending and crossing genres of folk, indie, bluegrass, Americana and roots. The five-piece won the Telluride Bluegrass Festival Band Competition in 2014 and won an Emmy Award for a soundtrack they contributed to a Rocky Mountain PBS special.

Also playing Friday night is Honeysuckle, featuring Sandpoint’s own Holly McGarry. Honeysuckle is coming off an exciting honor after being awarded Folk Band of the Year for 2018 at the Boston Music Awards. A Sandpoint High School graduation, McGarry attended the prestigious Berklee School of Music in Boston where she met Chris Bloniarz and Benjamin Burns. The trio formed Honeysuckle, a progressive folk act that blends older influences and traditional instrumentation with modern effects and inspiration. They are planning to release their third studio album in the coming months.

Another Friday night performer is 45th St. Brass. Hailing from Seattle, this six-piece looks like a brass band at first glance, but from the first note you realize it’s something different entirely. Their style comes more from funk, soul and sometimes hip hop, but having a drum and a sousaphone core means that the groove comes first and everything else is built on top. Translation: you’ll be dancing.

Rounding out Friday’s performances is the local teen band Stone Cloud 4, which won the Northern Stars Rising competition in Sandpoint in March. Featuring four local Sandpoint students, Stone Cloud 4 is known for their retro rock sound despite their youth. They’ll be playing the Forest Stage on Friday.

Saturday, May 13, will feature a little bit of everything, including Sandpoint’s own progressive Americana band BareGrass. Combining the classic combination of guitar, stand-up bass and mandolin, BareGrass blends a bit of bluegrass, blues and whatever else is on hand to create their unique down-home style of music.

Hailing from the back valleys of Western Wisconsin, Them Coulee Boys craft a brand of Americana that blends punk, bluegrass and rock n’ roll. They’ll get you dancing with their high-energy, Midwest-style bluegrass, but they’ll also balance the highs with the lows, the happy with the sad, the love with the pain.

Saturday night will also feature Diggin’ Dirt, a seven-piece powerhouse band with influences in afrobeat, reggae, funk and rock. The Northern California band will definitely have you on your feet.

Capping off the main stage on Saturday is Moon Tricks, a unique Canadian duo featuring a DJ and live musical elements such as harmonica, banjo and electric guitar. The duo has played festivals the past few years and made a name for themselves, wowing the crowds at Shambhala, Evolve, Joshua Tree and Atmosphere Gathering to name a few. The duo was awarded Kootenay Music Awards Artist of the Year in 2017.

The Forest Stage Saturday night will feature local acts Big Phatty and the Inhalers, the Brendan Kelty Trio and Breadbox from Spokane. There will also be guest performances by the local dance troupe the Gypsy Divas and a special kids’ parade, as well as a magic show Saturday. John Firshi will host an Open Jam Saturday afternoon as well.

As always, Jeff Nizzoli from Eichardt’s will provide food all weekend long, with Sandpoint Curry chipping in to offer dinner one of the nights. Upside Kombucha will offer their locally-brewed kombucha as a drink option that isn’t alcoholic.

All-inclusive passes are on sale for $175 each if you purchase before June 21. The passes include all the food and drinks you’ll need throughout the entire event, including breakfast. Families with up to three kids can get the family pass for $275. There are also individual day passes available for purchase. Contact www.eureka-institute.org to purchase tickets or for more information.

Robb Talbott of Mattox Farms Productions has been involved with booking SummerFest acts for a few years. Talbott said he first got involved in SummerFest “to help bring music to town in a family-friendly environment.”

“It’s a big honor to be part of this,” Talbott said.

All proceeds raised at SummerFest will benefit the Eureka Institute’s Construction Basics Initiative, a nonprofit program that provides underserved and at-risk students with the necessary life skill set and confidence in their ability to become a valued and productive part of society.

“This program gets teens out and helps them learn a skill,” Talbott said. “Some of the more visible things they’ve worked on are bus stops you see around town, like the one by the Library. All the proceeds go to that, which is really cool.”

Talbott also mentioned Nizzoli at Eichardt’s: “It’s amazing how much Jeff does for the community and for the construction initiative. This event is so community-oriented. It’s amazing.”