Profiles of Graduates: Sofia Kriz gears up for language-immersion program in Beijing

Heading off to college can be nerve-racking. For recent Sandpoint High grad Sofia Kriz, those jitters are compacted with the excitement of moving abroad. 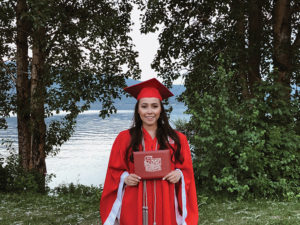 Kriz is set to attend the Pre-University Program at Beijing University this fall. The two-year long program is a language-immersive course for non-native Chinese speakers from all around the world, with math classes to keep students up on their skills as they approach college.

“This program looked really interesting to me, especially because it’s all international students, so it wouldn’t be anyone who is fluent in Chinese. We’d all be learning together, and I thought that could be a really cool way to learn,” she said.

Kriz will be surrounded by fellow Chinese learners outside of the classroom, as well: All of the international students share one dorm building.

“It’s going to be really interesting. I’m very excited for that,” she said.

Kriz began speaking Chinese as a child when her family lived in Singapore and she attended an international school, where it was taught as the primary language.

“I think it’s a beautiful language, and it’s so amazing to be able to be able to communicate with another culture, especially since China is becoming such a huge (economic) force in the world,” she said.

Kriz says she’s currently intermediately proficient in the language and hopes to become fluent during her time in Beijing.

“(My parents) are so excited for me. My dad is definitely someone who wanted me to be interested in Chinese throughout my life, especially since his mom is Chinese,” she said.

Her impressive plans for the fall came as no surprise to those that know her: Kriz has excelled in the classroom since she was young.

“I think the most important thing for me was that I started really early… and I just kept going on that path,” she said. “I really liked school, and I liked making my teachers happy, and that was what motivated me.”

Sofia completed calculus as a freshman. By the time she was a junior, she realized she could finish up early with just a few more classes.

“I never thought about graduating early until the year of, when I realized that I could have a whole year to do something if I just took a few more online classes,” she said.

“On one hand I’m really excited I got out of there but on the other hand, I also wish I had another year to be with friends and learn more about myself,” she said.

Despite her exceptional academic talents, the path to Beijing University wasn’t without obstacles.

“Beijing University wasn’t originally my first choice. My first choice was a different program where I would have lived with a host family, and it was major language intensive,” Kriz said. She applied both her sophomore and junior years, and was rejected twice.

“(That) was a really big blow to my self esteem, so I was really nervous applying to Beijing University because I figured it would end up the same way, but … it ended up turning out pretty great.”

After completing a year in Beijing, Kriz has several options laid out: She may return to the United States to begin college, or stay at Beijing University. She has some ideas as to her professional aspirations, but nothing is set in stone.

“I’d like to maybe, eventually go to China and work in a foreign business department where I could communicate with both American and Chinese business operators.”

She is also interested in a career as a financial journalist.

“I think I’ve got a whole bunch of options, which I’m excited about,” she said. “I’m not very good at deciding things, so that’s a little nerve-racking to me, but I think I can go anywhere at this point, and that’s a really great feeling. I feel good about (the future).”