The Music of the Mountains:

There’s just something about living surrounded by mountains. Missing are the crowds of people, the traffic, litter and noise of big cities. Also, the music just plain kicks ass.

Whether you call it bluegrass, Americana, or jam grass, when you take a few guitars, banjos, mandolins and stand-up basses played by those who call the mountains home, the music will always remind us of that lifestyle away from the hustle and bustle. 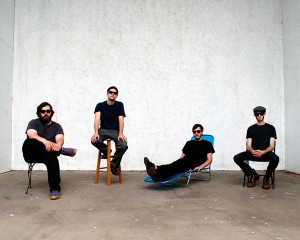 Head for the Hills.

Eager to get in touch with your own bluegrass soul? Two fantastic bluegrass bands will be playing a duel headline show at the Panida Theater.

Head for the Hills and Trout Steak Revival are combining forces on Wednesday, Nov. 18 at 8 p.m.

People have been trying to classify the music of Head for the Hills, but all labels fall short. They’ve been called everything from post-bluegrass to progressive string music, to acoustic noir. One thing’s for sure; they know how to put on a good show.

For Adam Kinghorn, Joe Lessard, Matt Loewen, Sam Parks and honorary member James Thomas, bluegrass wasn’t the music they had grown up with, but a style they came to later in life. Their musical influences are based into indie, rock, jazz, hip hop, world and folk.

“None of us had been a member of one of those families where they took you to a bluegrass festival and immersed you,” said bass player Matt Loewen. “We came to bluegrass later through another avenue. All of our musical tastes are pretty eclectic.”

Hailing from Fort Collins, Colorado—the state that has become the new Mecca of modern bluegrass—the band has steadily been winning accolades from their fans and critics. The Missoula Independent said “Head for the Hills have created a sound that is at once organic and precise, timeless and brand-new.”

For Loewen, just being in the mountains is what has inspired him, and that has helped Colorado solidify its place in the bluegrass scene.

The quartet recently released their third studio album, “Blue Ruin,” which has received positive praise from all over. Head for the Hills has been named “Best of Colorado” bluegrass for four consecutive years via Westword Music Showcase out of Denver, CO.

They even partnered with Fort Collins brewery Odell to create their very own beer.

“Odell has a cool pilot brew program where they can produce these small runs of different kinds of creative beers with people in the community,” said Loewen. “It was a pretty cool process.”

Headlining with Head for the Hills is another Colorado-based band, Trout Steak Revival. The five-piece band has been well-known for writing heartfelt songs, interweaving tight instrumentation and harmonies, and generally having a good time while doing it.

“We’ve played with Head for the Hills before,” said mandolin player Steve Foltz. “We’re really trying to reach out and play with as many different bands as we can, especially bands we respect a lot like Head for the Hills.”

“It was a great boost for our exposure,” said Foltz. “Along with that, it pushed us over the tipping point of becoming a full time touring band.”

Before the Telluride honors, the five members of Trout Steak Revival all had “day jobs.”

“Being in an up and coming band, even if you work real hard, doesn’t pay that great,” said Foltz.

Trout Steak’s latest album, “Brighter Every Day,” was recorded last spring and has been a solid base of work to tour in support of, though Foltz said they’re already itching to get into the studio again for the next one. Foltz also said that all five member contribute to the songwriting in Trout Steak.

“We all bring different songs to the group and the skeleton of the song generally is brought to the group,” he said. “Five singers, five songwriters. It’s a real team oriented process.”

Similar to Head for the Hills, Foltz said none of Trout Steak’s members were raised in a bluegrass family, but found the style of music later in life.

“With the exception of Bevin, we all played guitar when we started playing in the band,” said Foltz. “We weren’t the band that got together with fifteen years of experience at music school. Our strengths weren’t playing those traditional songs with metered improvised breaks. It wasn’t where our hearts were. We’ve all had more interest in folk and songwriting backgrounds.”

To catch both acts, head to the Panida Theater on Wednesday, Nov. 18 at 8 p.m. Tickets are $15 each, and can be purchased ahead of time at Eichardt’s Pub and Eve’s Leaves, along with www.panida.org.