From the forge to the frontier

The metalwork of sculptor Marte Cellura

Marte Cellura always dreamed of living in the mountains. Five years ago this month, he and his wife made their dreams a reality when they retired and moved across the country to a home in Sagle, near Talache.

Cellura spent his career in architectural metalwork and sculpture, with some of his commissions going to major museums and public places such as Carnegie Hall in New York City, the International Museum of Photography and the Vietnam Veterans Memorial in Rochester, N.Y., among others. 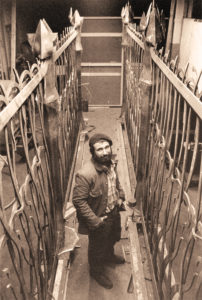 Cellura’s exhibit “Mountains, Monuments & Maquettes” is currently showing at Infini Gallery in Sandpoint, 214 Cedar St., until the end of March.

Originally born in Cleveland, Ohio, Cellura was first exposed to metalworking while helping his father in his architectural sheet metal shop. Cellura went on to study English, journalism and philosophy at Kent State University.

“I wanted to be a writer, a novelist actually,” said Cellura.

But, after taking a trip across the country, Cellura found his passion redirected toward a lost art.

“In the ‘60s and ‘70s, there was a craft revival happening as a result of the counterculture,” said Cellura. “People were embracing these old mediums again; glass, woodworking, blacksmithing. You could say blacksmithing was the backbone of Western Civilization.”

Cellura said he gravitated toward blacksmithing because, unlike writing, it was physical.

“This was physically demanding work,” he said. “You struggle with the material, you put your force of will into it. It’s an elemental thing, very primordial.”

Cellura received a grant from the National Endowment of the Arts in 1979 and apprenticed under famed metal sculptor Albert Paley until 1982, when he broke off to form his own studio called Metalmorphosis, Ltd.

Since then, Cellura’s work has been commissioned by major museums, public spaces and private collections. While metal of all kinds is his preferred medium, Cellura has experimented with combining other materials such as petrified wood, native stone and glass to his work, always with the goal to combine practicality with fine art. 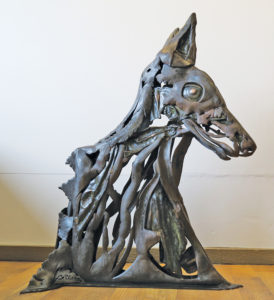 One of Cellura’s sculptures on display at Infini Gallery: “Zim Von Bruno – King of Hearts” in forged steel and copper. Photo by Ben Olson.

One new piece Cellura created in February for the Infini show is “Passage” a nearly three-foot high sculpture of steel, copper, bronze and aluminum, with granite and natural stone added.

“That’s my favorite, if you were to hold me down,” he said.

Cellura said he has always been intrigued by a more abstract style, as opposed to embracing realism in his work.

“The way I see it, how can we compete with the great creator’s work?” he said. “In my opinion, it’s better to be inspired by it and express it freely in a new way.”

Cellura is now nearing the end of a transition period preparing his property and studio in Sagle, and is hoping to begin creating more new pieces soon. Being a dog-lover, he is eager to explore the idea of doing a show dedicated to our four-legged companions.

“One of the things I loved about Sandpoint is how they really like their dogs here,” he said. “Not having children, our pets are our children.”

Check out Cellura’s work at Infini Gallery until the end of March.