The Ladies of the Day

Willie, Waylon and other musical cowboys like to croon about ladies of the evening. Without ladies of the evening the early West as we know it from movies and TV never would have happened. Nor would western films themselves. Think “Lonesome Dove.” And cowgirl vamps like Calamity Jane. Literature would have lacked spunk and spice. No classics like Daniel DeFoe’s salute to Moll Flanders. No busy Belle Watling in “Gone With The Wind.” No Susie Wong in “The World Of Susie Wong.” Stimulating histories of big cities and exotic tourist towns alike would be mere footnotes. Imagine The Big Apple without the sensuous entrepreneurship of famed madam Polly Adler. Same for Tijuana, Mexico, without the charms of Cassandra—a decades-long, over-the-border siren for California businessmen and politicians. Or Hollywood’s own escort service tycoon Heidi Fleiss. Her celebrity clientele earned her millions in her 20’s. Same for timber, oil and mining boom towns. Ladies of the evening pitched right in. Still do.

Curious, I wondered if Sandpoint had ladies of the evening quietly contributing to our culture. City Beach evening merriment? The Bonner County Fair? Cavorting among the stacks at the library? Hiding among the beets and kale at the farmers’ market? This could be a game changer for a sputtering journalistic career. So, like intrepid reporters Ben and Cameron conducting local bar research, I determined to personally explore the possibility. At my age I wasn’t going to attract suspicion.

My 1957 bride, however, masquerading as a U.S. President, vetoed the project. She advised I research a less intoxicating genre. She suggested ladies of the day, not night. Did she mean the late, great jazz/blues vocalist Billie Holiday, known affectionately as Lady Day? No, she did not. Did she mean singer/movie star Doris Day, everyone’s 1950’s girl next door? No. Maybe she meant the energetic 1982 Broadway musical, “The Best Little Whorehouse in Texas.” Those ladies plied their craft nights and days at a chicken ranch. The sheriff was their best customer. One  tune described the ranch as “…just a little bitty piss ant country place, nothing too high-toned…” Sandpoint?

I was wrong again. My bride, Jacquelynn, had in mind a different genre. The joyous, hospitable, hard-working ladies she and I encounter daily in and about town. Happy ladies who seem to love life.  And  make our lives happy too.

One of Frank Sinatra’s early 40’s hits was “Saturday Night Is The Loneliest Night In The Week.” Well, ours isn’t. On Saturday nights, like other nights, we  crash too early to feel lonely. But sometimes, feeling our oats, we grab a friend or family members and dine at Baxters On Cedar. Ebullient host Tommy sets the tone. But he’s no lady. However, gracious waitress Rebecca is. She’s so comforting one orders another bottle of Zinfandel just to hang around. 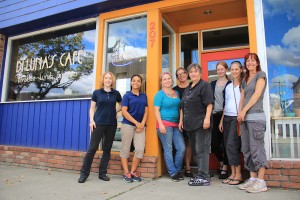 On a smoky Sunday morning (this was August) there’s no better way to recover from the previous evening’s excess than with steaming mugs of Di Luna’s coffee. It’s a custom mix from local roaster Evans Brothers. Making it taste even better are Michelle, Kim, Holly, Diana and Amy. They greet, seat and serve patrons with care and kindness. And with sparkling conversation, if you want it. After brunch, a few steps up Cedar is Pend d’Oreille Winery. And our pal Sarah. This upbeat lady of the day helps manage the intriguing gift shop. Sarah was the face of the former Coldwater Creek Wine Bar. She knows her grapes. So does Jen, who pours behind the bar and tends tables in the winery’s adjacent Bistro Rouge bar. Jen once lived on New York’s upper east side. During the Revolutionary War my bride and I lived in NYC. So we have much to talk about with fellow cosmopolite, sophisticate and urbanite Jen.  We all love New York and are happy we live in Sandpoint. 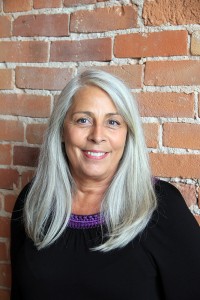 Being “Second Sunday” at gracious Kally Thurman’s Hope Marketplace, we drive through the smoke to Hope. Silly us, we travel there at barely above the speed limit. Such arrogance disturbs fuming, frowning, tailgating drivers who have more urgent and demanding destinations. Sitting with ladies of the day Lynn and Geneen, we relax as Beth Pederson plays guitar and sings. Later, inspired by Beth’s melodies, we harmonize at home on “Smoke Gets In Your Eyes,” “On Top Of Old Smoky,” and the Emmy Lou Harris hit, “Smoke Along The Track.” People driving by think we are Peter, Paul & Mary. Or Tami and Dave Gunter.

Monday morning. Jacquelynn hies herself off to the barn to talk politics with her horse, Ella. Both are liberals. I head back into town. Old guys tend to change shape, as it turns out, so trousers are taken to Jumpee at Sew Pro, on Main. “What’s this! Last week I lengthened these and took in the waist!” declares Jumpee. Anyone else would have been grumpy, but not Jumpee. “Yeah, well, I got fatter and  shorter,” I say. Next stop is the bank. A rousing  “welcome to Wells Fargo!” rings out from cubicles and teller windows. Manager Anita Pew skippers a happy crew and seems to know everyone who enters. Personal banker Kathe Lambert sees me, mumbles “Oh, no!” and dives into paperwork. Then we hug. Banking with a smile, and with  friends.

Dr. Whitney Hencker’s Sandpoint Optometry calls while I am dispensing free advice to the bankers. My new, collegiate-looking spectacle frames are ready. Staffers Amy and Audrey are effusive. They praise the new frames as “elegant.” I rush out to Division Street. Put on the hip new frames. Both ladies make courteous, customer-friendly noises. “They look nice!” And so forth. Clearly more impressed before the frames were on my face. Next stop is Spa At The Lake. A massage by world class therapist Jean. Sybaritic self indulgence. Nirvana. In a massage-induced coma, I stop for a haircut from Kaelin at Hair Unlimited, downtown. My hair is definitely limited. But Kaelin makes an exception. Kaelin looks like a UCLA cheerleader. Still, she says digging hair out of my ears makes her feel like a monkey. Driving home to Selle Valley I stop at Yokes. What is it about supermarkets that make checkout ladies so consistently merry? Jodi, Kellie, Lore and colleagues make grocery shopping a delight. 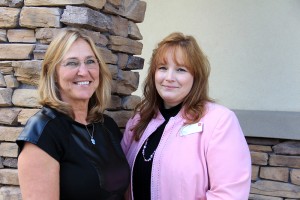 Final stop is the Ponderay post office. Postmistress Gale catches me about to dump yet another thick horse gear catalogue into the recycle bin. “If you do, I’m telling Jacquelynn!” she yells. Ladies of the day stick together. It’s unfair. But, as the old song says, they’re “just too marvelous, too marvelous for words.”

Thanks to them, we feel we are too.

Tags: ladies of the dayTim Henney