The king of play

In the sitcom Parks and Recreation, the director Ron Swanson is a deadpan libertarian who believes so much in small government that he wishes his own department didn’t exist at all; so, you know, the polar opposite of Kim Woodruff.

Woodruff, who has served as Sandpoint’s effervescent Parks and Recreation director for almost 36 years, announced this month that he was retiring at the end of January.

“Been living my cause and training the past 35-plus years to go pro at play,” he wrote to the Reader. 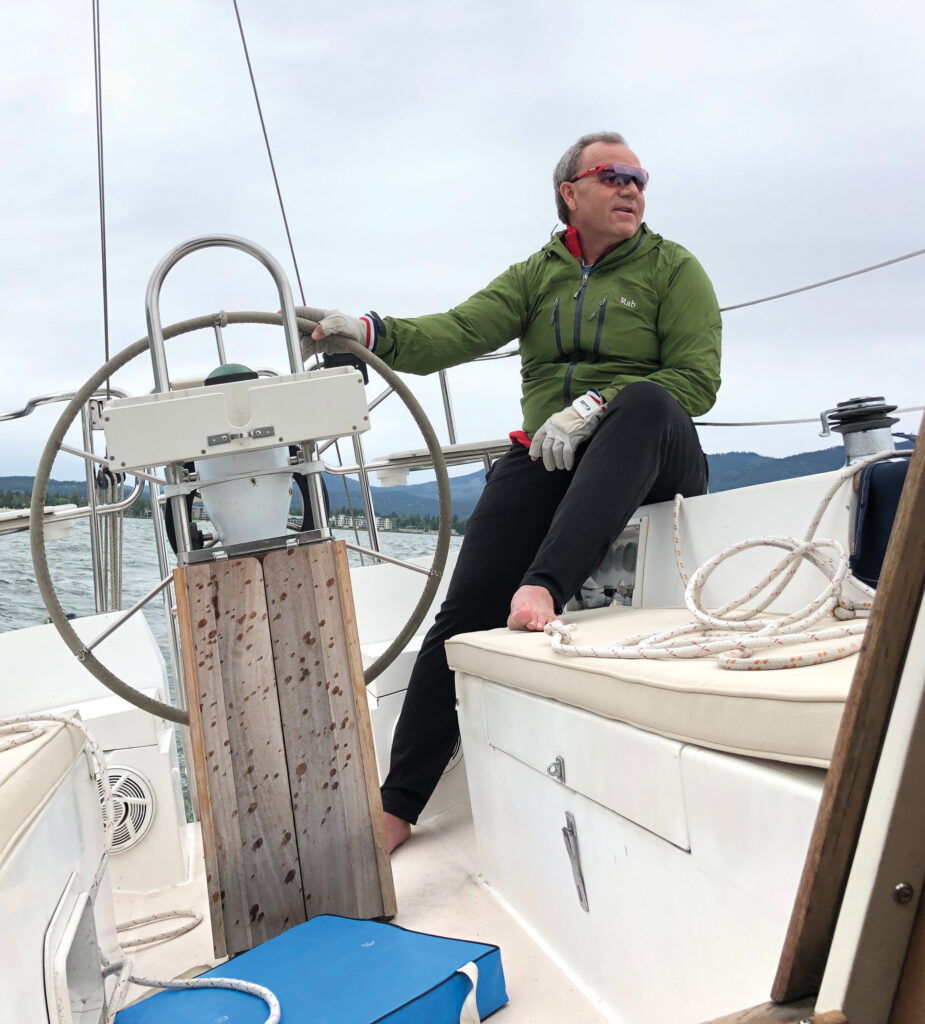 Kim Woodruff at the helm of his sailboat on Lake Pend Oreille. Photo by Hope Keenan.

A lively part of the city of Sandpoint staff, Woodruff began his career in 1986 after graduating from the University of Idaho in Moscow with a degree in recreation administration.

“Cheryl Klein was rec director and Maurice Dunn was parks director,” Woodruff said. “It was Cheryl who brought me up as an intern. Sandpoint Mayor Marian Ebbett hired me as director when Parks and Rec. merged into one department.”

For Woodruff, he never considered his career as director as a “job”; rather, as a way to live the life he wanted.

“If I dropped dead 10 minutes from now, I’d still be stoked,” he said. “The retirement thing is cool. As a director of Parks and Rec., I’m always looking 20, 30, 40 years down the line. Without that burden/privilege, I can truly live in the moment.”

With three children, Woodruff is proud to say they are all successful products of public education in Bonner County. All received academic scholarships; and, with four grandchildren (one more is on the way), Woodruff is looking forward to spending more time with family.

Dreams of becoming rich and powerful never entered into the equation for Woodruff. Rather, he simply wanted to enjoy his time both on and off the clock, and felt it was a blessing to have a job that funded the lifestyle accompanied with living in Sandpoint. Referring to it as “The Sandpoint Way,” Woodruff said it’s important to honor the lifestyle of North Idaho by taking advantage of playtime whenever possible.

That lifestyle includes mountain and road biking, sailing, skiing and anything else that blows the hair back: Work hard, play harder.

“For me on the value scale, money was always fourth, fifth, sixth,” Woodruff said. “Money is a necessary evil. Everybody needs to eat and have a roof over their heads, but I’m lucky. For me, this has never been a job. I haven’t had a job since I sold cameras in college.”

Woodruff said that while Sandpoint has changed in many ways over the past 35 years, it still remains the same if you scratch deep enough under the surface.

“It’s been an evolution,” he said. “We need to give a lot of credit to the people who did the work before I came. Sandpoint got to hire its first play director back in 1943. We’ve had that value system here, where play is so important.”

Comparing Old Sandpoint to Mayberry, the fictional idyllic small town from The Andy Griffith Show, Woodruff said he tries to keep a positive outlook on the future.

“Change comes,” he said. “It really does. We do our very best, but it was a simpler time back then. Technology has changed things a lot — sped them up. People are always trying to multitask all the time now. I’d love if our parks could be screen/tech free zones. If you look super hard at the dirt, you can see way cool things there. Same with the sky! When you take time to observe, you’re always rewarded. I’m looking forward to maybe not even having a phone during retirement.”

One thing Woodruff said he was especially proud of during his tenure as director was keeping Sandpoint parks free from commercial advertisements.

“There are no commercial signs or advertisements in any of our parks, in the outfields or scoreboards,” he said. “That’s a rarity. With parks, I feel you need to have somewhere you can go to be free.”

Woodruff said he’s looking forward to a new venture with his son, cleaning boats because it’s a fun excuse to don SCUBA gear and dive in Lake Pend Oreille. He’s also looking ahead at spending a lot more time on his sailboat.

“All my kids grew up on sailboats. We’d take a week or more and sail around as a family,” he said. “I used to sail a lot, but now, I just don’t have to come back. I’ll come back and drop my wife off with the dog and head back out again. It’s gonna be awesome.”

Riding his road bike is another activity Woodruff hopes to increase. He’s completed every CHAFE 150 road race since its beginning, and is looking forward to training to post a better time this season.

“I love riding my road bike,” he said. “When my kids were in school in Moscow, I used to ride down to see the homecoming games. It was only 120-130 miles.”

Woodruff said there are a bunch of people he’d like to recognize for their work building this community into something it is today.

“Chris Bessler, as far as a person in the community who has been a solid all these years,” he said. “He really jumped on the quality-of-life cause. And same with Chris and Kathy Chambers. They’ve done so much for this community.

“And I can’t forget about Mike Brosnahan,” he continued. “We took a lifeguard program that was marginal at best and, with his work — he actually interned for me when he moved here. He and I taught tie-dye at U of I — it’s now one of the only, if the only [United States Life Saving Association] courses in the Inland Northwest.”

When it comes to his biggest supporter, though, Woodruff said his wife Gina remains at the top of the list.

“She’s my biggest supporter and friend,” he said. “I’m everything I am because of Gina. We’re so blessed with family. I’m the most blessed person on the planet. I do a cause all these years that was never a job. I did my very best for 35 years. You know, you decide your own happiness in life. You decide how you see things and react to the world.”

When asked who the ideal candidate would be to take over his job, Woodruff said, “Whoever they hire is cool because I’m done, dude. I’ll be there to support them if they ever need help, and I’d be glad to help, but this is my life, dude. … I need to let go to be happy. …

“This will be the Decade of Kim. I have so many thousands of friends I’ve made over the years, the volunteers, the coaches and staff. I’ve watched a whole bunch of kids grow up that now have kids of their own. It’s so awesome. It’s fun to see these Sandpoint kids grow up here, move away, then come back. My son’s a perfect example. They go away and think everyone sails and skis all the time because that’s what we did. …

“You go away and there are a lot of cool things out there, but it’s a huge place and we’re just a bunch of ants, but we’re ants in our own private Idaho. It’s been such an honor and a privilege to serve this community of Sandpoint.”

When asked to give any words for those seeking their own happiness in the world, Woodruff’s advice is simple: “Just be nice. All you gotta do is be freakin’ nice. Don’t judge people and don’t be a dick.”

Sage advice from the king of play. We’ll miss you, Kim.