The gift of gaming

By Brenden Bobby
Special to the Reader

Holiday gifts in the age of the internet are tricky business. This article is primarily aimed at parents and grandparents who want to make a splash at Christmas without a lot of knowledge in the world of electronic games. 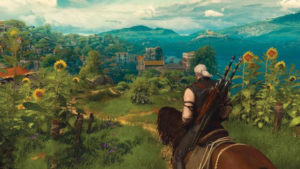 I’ll list off what devices these games can be played on, what kind of content they have and who they’re geared toward. When I list Steam as one of the platforms, that means it’s exclusively played on a personal computer using a program called Steam. Steam was developed to create a nexus for computer games users could download online, eliminating the need for DVD installations.

If you’re unsure what device your loved one uses, slyly ask some questions. You might get some indignant “You know nothing” huffs, but I guarantee they’ll be squealing with joy when you get them exactly what they wanted on their device.

Disclaimer: All games with online multiplayer are rated without online interactions taken into account. Foul language may not be programmed into the game, but that doesn’t stop someone’s friends from using it while they play.

Warframe lets you live the life of a spacefaring ninja with superpowers. While the game is free to play, it has a microtransaction store built-in, meaning you can pay real money for in-game perks. The best way to do this is with a gift card for your gamer’s console of choice. Warning: It’s extremely bloody, recommended for young adults.

Does your gamer love shooting stuff while you abhor the idea of killing innocents? The Division 2 puts you in the boots of a government operative setting out to make things right, cleaning up the post-apocalyptic streets of Washington D.C. one bad guy at a time. If playing on a personal computer, it requires the Uplay application, which is free. This one has frequently gone on sale for under $30.

If your gamer loved Skyrim, they will lose their mind over The Witcher 3: Wild Hunt. Featuring open-world maps totaling more than 136 square kilometers, it’s easy to get lost in the seemingly infinite content. It’s won a ton of awards and can be extremely addictive. It can also be quite bloody, as you’re tasked with killing monsters and bad guys.

Find yourself stranded on an ocean world, tasked with building a base, chasing the story and surviving at all costs. Pick up Subnautica: Below Zero, a standalone expansion, to experience it all beneath a frozen ocean. Kick up the claustrophobia factor by playing it in virtual reality. No blood, no foul language.

Ever wanted to perform open-heart surgery without fear of consequence? Maybe you just want to see what happens when you fling a saw across an operating room. Highly entertaining, a great party game. Blood and organs are present, but it all looks like playdough.

This game is far sillier than the name suggests. Your entire goal in this game is to be a goat, smash into stuff and break things. It’s completely silly, and you should probably wait until it goes on sale before you buy it.

One of the most popular Korean massively multiplayer online games (K-MMO) on the market, it offers an immense amount of content for a reasonably low price. It has some of the best character customization of any game on the market, but is also requires a large time investment to fully enjoy.

One really neat feature of Steam is that you can buy items and then safely gift them digitally via email. It’s all very clearly labeled in Steam, and it does a great job of walking you through the process. You do need to register an account, but doing so is free.

If the family member you’re shopping for wouldn’t be interested in anything on this list, or already owns all of it, don’t fret. Most retailers offer gift cards for Steam, the Microsoft Store (Xbox One), the PlayStation Store and the Nintendo Online Store.

Getting a gift card for a gamer isn’t an insult, it can be the perfect present when it’s a gift card for their favorite console. Video games are evolving daily and many of them offer downloadable content (DLC) at a premium after they’ve been released. Think of them like expansion packs. Your family may own the game, but they may really want that new desert map all of their friends have been playing on, and a gift card could be their ticket in.