When Dustin Drennen says he’s about to tell you the “short version” of how he ended up as a musician and writer practicing his craft in Clark Fork, it’s best to get comfortable.

This is no insult — the story is absolutely worthwhile.

It begins at a party in the ‘90s, when Drennen was just a teenager. 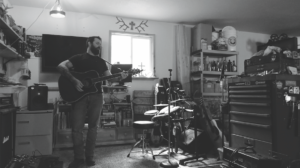 “This kid rolls up on a skateboard … and he has this CD, it’s Bad Religion, ‘No Control.’ He goes, ‘put this on,’ and I hear punk rock for the first time,” Drennen said, noting that until that moment he knew he loved music, but couldn’t put his finger on exactly why. “For me that was a salvation experience. The heavens opened up and there was a beam of light and it was like, ‘This is what I’ve been looking for.’”

The journey following Drennen’s discovery of punk rock covers a lot of ground, both figuratively and literally. Shortly after his “salvation,” Drennen’s parents moved the family from New York to Indiana, where all the record stores were chains and he had to live on the tapes he’d brought with him. As time passed and punk made it into the mainstream, Drennen said the relationships he forged morphed into a band — Canterbury Effect — that ended up with a record deal at a small label in Texas and even some touring in the early 2000s. Though the band members went their separate ways, Canterbury Effect’s music is still available on Spotify.

Next came the start of his family, as well as an art collective business, which was “squashed” by the recession around 2008, Drennen said. It was then that he said he felt he was “kicking a dead horse.”

“I felt like I was not challenging myself much … I felt like I needed to recreate myself,” he said. “That’s when I joined the Army. I thought, ‘I’ll either die, or I’ll come out the other side a different person.’”

In just a little over three years in the Army, Drennen was stationed at several forts as well as in Afghanistan. Upon coming home, Drennen’s life kept up its signature pace of change.

He said that coming back from a war made him realize that he was grateful to have made it back whole, and with that gift he’d do what he loved: writing and creating. That’s when he started to focus on the acoustic guitar, and his current sound came to life. With that came the need for a name better suited to a independent musician, as actor Dustin Hoffman had a monopoly on Drennen’s legal name.

“I heard (Dustin Hoffman) was taken,” he joked. “Drennen is my mom’s maiden name. In some ways I feel like it suits me more, because Dustin Hoffman is always some other guy’s name.”

Drennen’s story continues with a stint working in Phoenix, going through an arduous divorce and then meeting “this girl,” he said, adoration evident in his voice as he talks about his now-wife Robynne.

“I don’t put much stock in the astrology stuff, but she’s a Taurus and I’m a Pisces, so the whole ‘the fish and the bull fall in the love, where do they live?’ thing — we’re totally like that,” he said. “We do things in such different fashions but at the end of the day there is no denying.”

What ensued was a lot of “figuring it out” over two years, and finally a decision to choose a spot on the map to move, knowing Phoenix was not where they wanted to be. So with their house up for sale, everything they owned in a small trailer, and Drennen’s two kids from his previous marriage and their dog, Scout, loaded into the back seat, they set out, driving a straight 24 hours to arrive at Sam Owen Campground in Hope on July 4, 2014.

“We just decided, ‘This is our Independence Day. We’re going to live where we want to live,’” he said.

Drennen and his family, now grown to four kids, has since built that independent life in North Idaho. Now, his focus is on promoting his artistic endeavors from a part of the country where that kind of work is largely internet-based.

“It challenges me to be more creative in everything, but that’s cool because then my eyes are wide open to the stuff that’s going on around me,” he said.

Some of Drennen’s latest works include music releases — all available on Spotify or at his website, www.dustydrennen.com — as well as a book of poems titled “The Making of a Key,” also available on his website. Drennen’s singer-songwriter style is deeply soulful, and he has a particular affinity for incorporating ghost stories into song.

To sum up Drennen’s artistic philosophy would be a fool’s errand, so luckily he is working to do that himself in the form of a manifesto that he hopes to edit and release sometime soon. It all circles back to something that comes up often in a conversation with Drennen: he’s driven to create, to share and to leave a legacy of passion for this craft for his kids and anyone else who will listen, all from the home he found in the Idaho Panhandle.

His own words, found under his website’s biography, say it best: “People tell me that I should move to a city. Listen, I need to make it from here and on my own terms. This place and these people are inspiring to me. If that’s limiting, at least it’s real.”