Movies, television and film have given us an idea on what medieval food must have been like: slop and watery gruel for the peasants while the aristocracy bathed in luxuries. This depiction has merits and some critical flaws. Winters before refrigeration were brutal and over the course of at least five centuries, famine was bound to strike several times leading to some dire circumstances when it came to food. 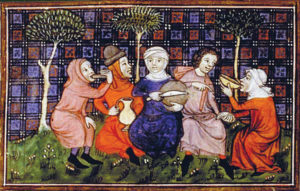 “Pass the turkey leg or I will have you run through.”

It might surprise you that the peasantry ate very well for the rest of the year.

Note that the medieval period was a hugely expansive length of time across several continents, so for the purposes of this article, I’ve focused mostly on the experiences in England and northern France. However, there are some rules that held true from London to Jerusalem.

When it comes to medieval life in general, practicality and status were extremely important and often highly opposed in the medieval family’s way of life. Being less practical showed you could afford to be, which isn’t too different from today. If you can afford to overnight fresh fish and an award-winning sushi chef to entertain for a party, you’re the talk of the town.

What differed in the medieval period was the actual food. Salmon was a staple in English peasant meals and considered to be uncouth to the noble palate. It was popular among the lower class because it was a fairly large animal that was easy to catch, prepare and preserve. Pork was also commonplace among nearly all in the lower and middle classes, as most homes owned at least one pig that acted as a garbage disposal for trimmings and scraps, as well as a source of food over the winter.

Another misconception is that food was disgusting, bland and hardly nutritious. In a comparison to what most people eat today, the medieval peasant’s diet was much more nutritious, packed with carbohydrates from bread and tubers, and protein from meat as well as the blood in the form of English black pudding as opposed to the huge quantities of salt, sugar and carbs packed into our ready-to-eat foods. The most important part of the peasant’s diet was that they worked off everything they ate. It’s believed that most peasants were in incredible shape, just from the sheer amount of work they needed to complete in a day.

This marks another dietary difference between the lower, middle and upper classes of the medieval era: heartiness. It’s still important to have a hearty meal when your primary job requires physical labor, but as one departs from that style of work into more administrative roles — as was the case with the knighthood and lower vassals of the era — heartiness just starts sticking to your ribs.

Meals of the middle classes were marked with spices and flavors, usually imported from Spain, France, Italy and northern Africa. They were luxuries guarded under lock and key, where only the lady of the house and the chef had access to them. Could you imagine working for an entire day to pay for four nutmegs? The meals became lighter and more varied, with aggressive spices. Pork was still heavily featured in the middle class diet, because it was practical, but still a cut above the food eaten by household servants.

In the highest echelons of medieval society, kings, dukes, bishops and others that acted as effective billionaires enjoyed a huge variance of food, most of which was imported. Interestingly, chicken was a staple enjoyed regularly by the elite, and was considered to be a posh dish.

For hundreds, perhaps even thousands of years, it was commonplace for every home to harbor chickens. They were more valuable for producing eggs than being eaten, but by eating them regularly you showed you were above the common rabble, well insulated and protected from famine. Pastries were featured heavily in the aristocracy’s cuisine, too, though the pastry dough was virtually inedible and acted more as a container for whatever was inside it, be it custard, puddings or the innards of shepherd’s pie.

One of the important traditions at the time in these households was to cut the upper crust of the bread and present it to the head of the household, or a visitor of higher status. This is the origination of the term “upper crust” when speaking about billionaires and the like now.

Bread was a common link between all classes of the era, which has made an interesting reversal today. Unrefined flours that made darker breads were for the peasants, while the bread got whiter with more refinement the higher up your status became. For those of us who suffer from celiac disease and can’t digest the gluten protein, I can imagine we must have lived short and miserable lives in those days.

One final point I found interesting was that celebrity chefs were a thing during the medieval period. In fact, ledgers of food are some of the most well-preserved historical documents we have from that period, and they seem to reflect that prominent chefs were shuffled from castle to castle as they were poached by kings and bishops.

As you sit down and break bread this Thanksgiving with your friends and family, just stop for a minute and try to imagine medieval Gordon Ramsey calling some posh noble a muppet and getting away with it.

See you after the food coma!