I am always behind. The fact that another year has passed by, and we are on the brink of starting a new year will not hit me until mid-February. This really works out great for me because just when people are tearing that beautiful list of resolutions into tiny flammable shreds, I am full of hope and promise. Plus, I try to avoid setting myself up for disappointment.

If I do resolve to do anything, it’s to not do what everyone else does. I am about 86 percent successful at this. Instead of lists, I think reflecting on the things we did that made us feel like shit and “resolving” not to do them again the world at large would be a happier place. A few Februaries ago, I gave myself permission to make my own choices. I resolved to quit trying to fix myself. If I was going to go through the rest of my life dropping F-bombs while sporting a muffin top, at least I would be free.

Since then, I’ve become a happier person. I have never read “Twilight.” I don’t have a Goldendoodle. The thought of eating kale anything pisses me off.  I cuss a lot and it feels amazing. I drive slow. I shun structure. CrossFit and Paleo seems like a cult to me. And the most religious experience I have ever had was in a sweat lodge with a Native American shaman.

I am grateful that I get to have the sweat experience a couple times a year, but I am not going to force it on anyone, nor am I going to post excessively about how enlightened I feel after one. Nothing turns me off more than assholes who constantly talk about how happy and spiritual they are while passive-aggressively attacking people who aren’t like them. I don’t care if other people eat organic and obsess over their Goldendoodle, but I’d rather eat fake food than be a fake person. That’s a choice I get to make, and weirdly, I am so much happier and skinnier than I was when I was drinking weird-ass shakes and running on a hamster wheel at the gym. 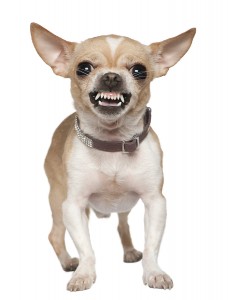 I make my own choices, including my dog breed selection: a Chihuahua. This dog breed is loyal, adorable, sneaky, courageous and vindictive. They’re a bit like your high school sweetheart. One moment this tiny lover is snuggling you and showering you with sweet angelic kisses while staring deep into your soul. The next moment they’re pissing in your shoes because they saw you look at that Great Dane walking down the sidewalk. In other words, the most successful owners of Chihuahuas should have had some experience with crazed lovers.

Chihuahuas prefer the company of other Chihuahuas, and they like to party. My seven-pound Chihuahua, Otto, has a Chihuahua cousin Pepe, a teacup weighing in at about four pounds. These two always get into trouble when together. This is because Otto lives in the country and has a free range hippy lifestyle, whereas Pepe enjoys his city life complete with consistency, rules, dietary restrictions and a selection of clothing larger than some people I know. Otto inevitably shares some of his delicious food stashes with Pepe, whose mother (my sister) always knows when he has consumed anything other than the vet-prescribed kibble.

This Christmas break, Pepe came over for a visit. Upon entering my home, he and Otto did the international Chihuahua hello dance and then scampered off to find something to get into. About five minutes later, they sauntered back into the room looking guilty. Pepe jumped into my sister’s lap, and Otto found Grandma. Within 30 seconds my sister squealed, “Pepe! What did you eat?” OMIGOD, his breath smells like weed.”

She looked straight at me with a piercing glare. I said, “What are you talking about?” She continued to claim her dog had somehow managed to find a stash of marijuana in my house and consume it.

Pepe was not doing me any favors. He was just reclining in her lap with glazed-over eyes and a half-smile. I tried to defend myself. However, my role as the free-spirited artist of the family makes me an easy target for something like a pot stash. I told her I definitely didn’t have any pot laying around at Chihuahua-level. In fact, there was no pot at all, and if there was, I likely would have smoked it prior to her and my mother coming over, as opposed to giving it to my dog so he could share it with his dog friends. Then I had to tell my mom I was joking and suggest maybe one of my teenagers was a pothead.

My 15-year-old catapulted off the couch, nearly putting her phone down in the process: “Are you kidding, Mom? I don’t do drugs.” She then ran around, sniffing and smelling every corner of our house, in order to clear herself of all blame. Finally, she found a lone leaf of a house plant, half-chewed on the floor. After my mother and sister sniffed and chewed the leaf and researched its potential for poisoning Chihuahuas, we were finally cleared of marijuana possession accusations.

After they left, my daughter, and I just sat breathing that long sigh of relief that one has after surviving a holiday family visit. Otto walked into the corner under my plants, and came back in a much better head space.

Maybe we should all resolve to be more like our dogs.